The Saunders-Roe SR.A-1 was a unique attempt at combining fighter-like capabilities with the qualities of a flying boat.

Authored By: Staff Writer | Last Edited: 02/20/2018 | Content ©www.MilitaryFactory.com | The following text is exclusive to this site. 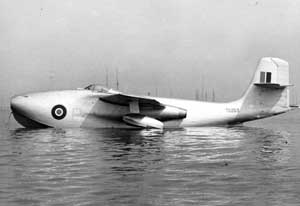 The flying boat had certainly proved its worth during combat service in World War 2 (1939-1945). Prior to the conflict, it was a passenger-hauling attention-getter with many top carriers showcasing all sorts of breeds under catchy names to help generate interest. These typically large platforms held inherent boat-like qualities that allowed for landing on open water, never requiring the services of a prepared runway. Their military counterparts were similar in form but wholly different in function - capable of loitering over contested areas for hours on end and hunting down enemy warships and submarines. The designs were sound handlers over the sometimes tumultuous seas and showcased the long endurance required for operational service over thousands of miles of vast ocean space - particularly in the Pacific Theater against the Empire of Japan. Despite the obvious benefits, militaries placed little emphasis on development of a "flying boat fighter" during the war - relying instead on carrier-based fighter types and land-based fighters where territorial gains allowed.

Additional challenges lay in converting these large - sometimes massive - prop-driven aircraft into more useful, compact fighter design forms. Performance would always be a key limitation for water-based aircraft as would the assault of the salty sea - easily damaging mechanical components and metal skin being exposed to the air.

The British concern of Saunders-Roe ("SARO") held extensive experience in the design, development , and manufacture of flying boats. The Isle of Wight-based company was founded in 1929 and managed an active existence up until 1964 during which the firm produced flying boats of all sizes with several being used in the maritime role by the British during World War 2. SARO became one of the few flying boat providers that eventually took up the charge of developing a "flying boat fighter" despite the technological challenges that lay ahead.

Turbojet technology was still in its infancy during the middle-to-late war years but it offered performance that would eventually outmatch that of propeller-driven engines in time. It was decided that any chance at making a flying boat fighter concept work would revolved around use of a paired turbojet configuration. Preliminary work was undertaken in 1943 and begat Air Ministry Specification E.6/44 in 1944 which requested three working airframes for active testing.

SARO's original design had been designated the "SR.44" but this evolved with the evolving specifications in turn to become "SR.A/1". Engineers forged a classic flying boat shape in their SR.A/1 by providing the requisite, well-contoured, boat-like hull set under a deep fuselage. All lines were smooth in the design, a typically British approach to their jets of the period, which sat the cockpit along the high fuselage dorsal spine. The single-seat cockpit was set ahead of midships to provide for the best possible viewing out-of-the-cockpit with little framing was used on the canopy. The nose section of the aircraft was cut off to allow for the aspiration needed of the twin turbojets buried within the fuselage. The turbojets were installed deep within the design in a side-by-side arrangement. The nacelles emanated from the sides of the aircraft to form the needed jetpipes for exhausting. The tail unit featured an elegantly-shaped vertical tail fin with a clipped tip and a mid-mounted pair of horizontal planes to either fin side. The main wing assemblies were fitted at amidships and high-mounted to supply the needed lift over water. These units also held four large internal fuel tanks for the thirsty turbojet installations. Retractable pontoon floats were added under the wings to protect the aircraft from tipping. When on the water, the aircraft assumed a notable "nose-up" attitude as this aided in keeping the intake opening clear of water ingestion. The engine jetpipes were also raised from the water line to keep their exhaust streams away from the surface.

As a fighter design, the SARO SR.A/1 was to feature a battery of 4 x 20mm Hispano Mk 5 series cannons mounted over the ductwork in the nose. However, these weapons were never fitted to the three prototypes completed though the cutouts for their barrels were still a part of the finalized design. There was to be an additional capability of carrying 2 x 1,000lbs bombs which was never tested as well as rocket-launching support. The SR.A/1 never entered into its weapons testing phase.
Advertisements

The powerplant of choice became a pairing of Metropolitan-Vickers (Metrovick) Beryl turbojets resulting in 3,850lbs thrust output each unit. The engines were in development since 1941 and became the first British axial-flow compressor engine types. While the design eventually evolved to become the famous Armstrong Siddeley "Sapphire" turbojet engine line, it was not a success in its current Beryl form which worked against the SARO design by project's end.

The first aircraft delivered - TG263 - had begun its construction phase prior to the end of the war in 1945. However, SARO's attentions were soon pressed onto other projects while the need for a flying boat fighter waned in the post-war military drawn-down. As such, first flight of TG263 was not until July 16th, 1947, well after the war had ended in 1945. The ensuing "Cold War" against the Soviet Union would present its own set of rules and challenges to be met so perhaps the SARO flying boat fighter could still be of some use there.

TG263 completed several powered test flights on and over water in the period following. It was found to offer strong performance and good handling characteristics. However, one aero phenomena called "Dutch Rolling" was soon found to be a consistent issue with controlling - the phenomena being an inadvertent motion of the aircraft which rocked it side-to-side though a tail-wagging action. This led engineers to develop and install a conical, "bullet-shaped" fairing halfway up the leading edge of the vertical tail fin to counter this. During one other test flight, both engines failed the pilot, forcing the aircraft into a rather precarious - though successful for the pilot and aircraft - unpowered landing. Poor weather then delayed additional testing for the short term.

The second prototype - TG267 - was finally on hand to further the testing phase for SARO. Its first flight was recorded on April 30th, 1948 but this airframe only saw limited action. Another aero phenomena being encountered resulted in revised wing sections being utilized, improving control further. However, the program suffered a severe - and fatal - setback on September 17th, 1949 when TG267 was lost during maneuvers (killing its test pilot in the process).

The third, and final, prototype of the series became TG271. This airframe was given more powerful Beryl turbojet engines to help it achieve better performance. First flight was recorded on August 17th, 1948 and it was later wooing crowds over Farnborough in September during the classic British-hosted air show. It was this airframe that managed to record a maximum recorded speed of 624 miles per hour during dive testing. Unfortunately, TG271 was also lost when, upon landing, its hull was pierced by something in the water, causing it to split open and take on water and sink. The pilot managed to escape but the aircraft was a complete loss.

With only TG263 remaining, testing continued into the early 1950s though with far more reduced interest on the part of the Royal Air Force - particularly with the rise in improved land-based and carried-based fighter forms as well as continued development into the turbofan propulsion system. The program was eventually written off and not furthered beyond the three airframes contracted for. The dedicated flying boat fighter age never was as it gave way to more advanced, jet-powered swept-wing concepts appearing throughout the world. Even the Beryl engine was given up for good by Armstrong Siddeley during 1948, essentially killing the propulsion system relied on by the SARO aircraft. A move to another powerplant would have proven costly and complicated for an already overblown program.

To that end, no British military service ordered the SARO SR.A/1 as a production quality form, thus ending the tenure of the deep-fuselage, jet-powered fighter that could take-off and land on water.
Advertisements

(Showcased performance specifications pertain to the base Saunders-Roe SR.A-1 production variant. Compare this aircraft entry against any other in our database or View aircraft by powerplant type)
STANDARD:
4 x 20mm Hispano Mk 5 cannons 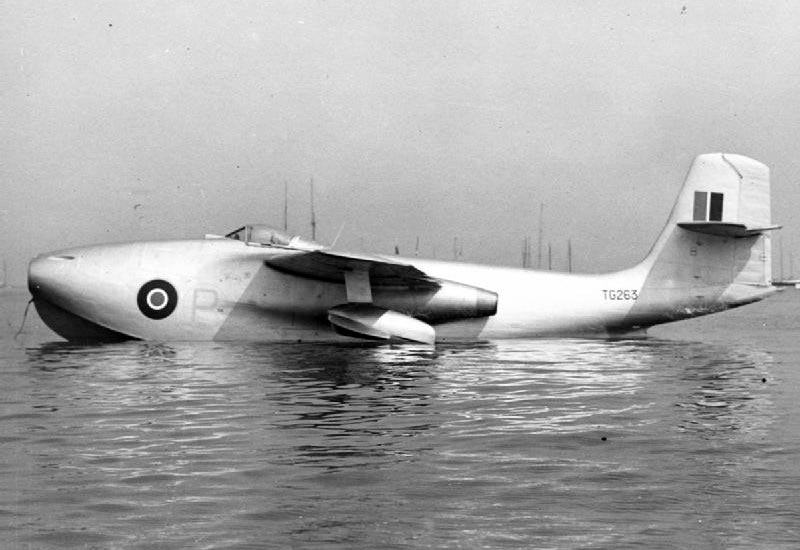