The impressive Saunders-Roe SR.53 rocket-and-jet-powered interceptor was ultimately cancelled by the British government when battlefield requirements changed during the early Cold War period.

Authored By: Staff Writer | Last Edited: 03/15/2018 | Content ©www.MilitaryFactory.com | The following text is exclusive to this site. 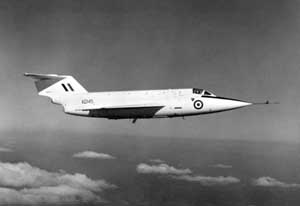 Following the close of World War 2 (1939-1945), which saw the capitulations of enemies in the Kingdom of Italy, Nazi Germany and the Empire of Japan, the enemy of the West now stood as the mighty Soviet Union. The threat beyond its growing atomic weapons aspirations was the high-flying strategic bomber which could be used to reach out over vast distances, out-flying ground-based defenses, and delivery deadly payloads without a direct counter. As such there was a push to arm frontline nations like Britain and France with capable fast, high-flying interceptors to meet the danger at hand. One British foray into the field became the Saunders-Roe "SR.53" - a relatively short-lived mixed-powerplant, single-seat vehicle of then-advanced design.

The primary requirement of an interceptor, as proven through the air war of World War 2, was in rate-of-climb to altitude and speed-to-target. Being able to reach altitude and meet the threat in a short amount of time was paramount to the destruction of an inbound aerial threat. World War 2 showcased, primarily through the compact German Messerschmitt Me 163 "Komet" single-seat, rocket-powered interceptor, that rocket technology was the only viable technology with which to meet the requirement. While the jet age had dawned during the conflict, the technology of turbojets was still more-or-less in its infancy and rocket power offered a more promising short-term future in the scope of interception.

The Specification is Formed

The post-World War 2 era was undoubtedly an exciting time for aerospace engineering as technology advanced at a quickened pace thanks to developments in the early Cold War years and the mounting tension between East and West. As Britain remained on the frontlines, it was imperative that the nation attempt to develop an in-house solution to meet the growing stable of Soviet bombers capable of reaching British soil. The formal Air Staff requirement came down in January of 1952 through Specification F.124T which called for a rocket-powered interceptor with a minimum rate-of-climb of 24,000 feet-per-minute and weapons support for both air-to-air rockets as well as an early-form air-to-air missile (namely the de Havilland "Firestreak" IR-guided missile). Beyond Saunders-Roe answering the call there was interest had on the part such storied concerns as Blackburn, Bristol, Fairey and Westland.

The Limits of Rocket-Only Power

One of the major challenges to these design teams was the rocket propulsion scheme. Rocket motors, or boosters, used up their fuel stores rather quickly which only left minutes of operational performance for the same propulsion system that was expected to be able to ferry the aircraft to and from an engagement - all the while allowing time for the aircraft to engage its target. This was deemed impossible to achieve solely on rocket power so the inclusion of a turbojet engine to handle the pre- and post-attack run portions was a new requirement of any proposed design. Indeed the Me 163 of World War 2 fame, as fast as it was at speeds of over 550 miles-per-hour, only held about seven minutes of total flying time so it was limited in a tactical sense to one or two attack passes through bomber formations before being recalled home. From there it was required to glide to earth under its own lifting power and land on a belly-mounted skid.

The Program Evolves to Include a Sole Potential Candidate

With the requirement being revised and amidst an ever-growing project commitment, only Avro and Saunders-Roe decided to pursue Specification F.124T and this produced the Model 720 for the former and the P.154 for the latter. In 1952, Saunders-Roe was granted a three-example prototype contract and these aircraft were designated as XD145, XD151 and XD153. As soon as 1955, Avro's Model 720 was dropped from contention primarily due to cost of developing both types concurrently. The focus now squarely shifted to the P.154, which advanced to become the better-known "SR.53".

The SR.53 was a very impressive-looking aircraft by 1950s standards, full of sharp lines and smooth contours. At its front, the fuselage held a pointed nosecone and, at its rear, a "T-style" (or "Multhopp Tail") tail unit. The tail unit consisted of a single vertical fin with high-mounted, all-moving horizontal planes. Under the base of the tail would exhaust the combination powerplant through two individual exhaust ports (in an over-under arrangement). Since this combat warplane would not require a interception radar fit in the nose, the nose was allowed to be of generally smaller dimensions than normal. The sole pilot sat under a simply two-piece canopy with light framing. Views to the rear were blocked by the raised fuselage spine which was required for housing the two propulsion systems as well as the needed fuel stores. A retractable wheeled undercarriage was to be used for ground-running. The wing planform was delta-shaped and the mainplanes mid-mounted along the sides of the fuselage. These structures were clipped at their tips to accommodate the required missile armament via wing tip mounts.
Advertisements

The over-under engine arrangement featured an Armstrong Siddeley "Viper" turbojet engine fitted to the upper compartment and a de Havilland "Spectre" rocket booster in the lower compartment. The former was rated at 1,640lb thrust output with the latter adding 8,000lb of thrust to the mix. Because of the combination powerplant scheme in play, much of the fuselage and some of the wings were used to house the needed fuel reserves - a kerosene-based compound was used for the turbojet and a volatile "High Test Peroxide" (HTP) mix for the rocket motor. To aspirate the turbojet there were smallish intakes set to either shoulder of the pilot just outside of the cockpit aft framing. Despite the output power of the Viper, the aircraft would still require support from the Spectre rocket for take-off actions.

Dimensions of this impressive aircraft equaled an overall length of 45 feet, a wingspan of 25 feet and a height of 10.9 feet. Empty weight was 7,400lb against a Maximum Take-Off Weight (MTOW) of 18,400lb. Its primary limitation, aside from its dangerous fuel mix and high operating speeds, was its seven minute endurance window offered from the rocket booster - a failing of the wartime Me 163 as well.

The Program Falters yet Progresses

In a relatively short amount of time, the SR.53 program hit several snags: changing technologies and battlefield requirements worked against the slowly-gestating design which was also being delayed due to its inherent complexity. Such was the slow progress of the program that the third flyable prototype, XD153, was cancelled outright in January of 1954 (as mentioned earlier, the Avro Model 720 joined it in 1955). Taxiing trials with the XD145 prototypes did not begin until May of 1957 and a first-flight ultimately followed on May 16th of that year. XD151 was then showcased through several flybys over the heads of amazed onlookers at the Farnborough Air Show that September.

In May of 1958, XD145 was flown supersonically (Mach 1.14) for the first time. In June of 1958, an aborted take-off of XD151 cost both the aircraft and its pilot. Unable to stop, the aircraft ran over the end of the runway and hit a pole before being permanently stopped by a concrete fence. This force of impact then led the full fuel tanks to rupture and ignite. In all, this example recorded just 5.15 hours in the air covering eleven total flights.

This fatal disaster forced the grounding of prototype XD145 which was not allowed to go airborne again until February of 1959 and, even then, there were restrictions placed upon it to not have a repeat of XD151's encounter. In September of 1959, Mach 1.48 was achieved.

All told, the SR-53 held exceptional performance traits for its time: Its maximum listed speed reached Mach 2.1 - 2.2 and the service ceiling was 67,000 feet with a rate-of-climb of 52,800 feet-per-second.

The End of the Road

From the outset, the SR.53 was intended as the production-quality interceptor the Royal Air Force (RAF) sought but the design was eventually downgraded to an experimental platform for data-collecting. The P.177, which was to have some commonality with the SR.53, was now moved into the prime position to become an operational form one day. It was to be a dimensionally larger and more powerful, radar-equipped interceptor should it have come to fruition. However, waning interest on the part of authorities meant that the P.177 initiative was ended in 1957 following a British defense review stating that unmanned aircraft should now be the primary consideration for its fighting services.

With the death knell struck against the P.177, there stood little value in retaining the now-wholly-experimental SR.53. The aircraft was spared from the scrap heap for a little longer and used in continued flight testing due to its excellent performance capabilities (particularly in reaching up to high altitudes). Forty-six total flights were had by XD145. Despite its dangerous qualities, pilots remembered their time in the XD145 with fondness, stating its good control feel and stability. XD145 was eventually saved from scrapping and preserved as a museum showpiece (Royal Air Force Museum Cosford).

At the end of the day, there proved little need for a mixed powerplant interceptor in a world where missile technology had advanced to the point that it would drive strategic bombers to low-altitude flight paths in time. Furthermore, jet technology advanced along its own lines well enough which further negated rocket-powered interceptor forms. As such, the SR.53 was something of a limited technological accomplishment for its time, becoming nothing more than a footnote in the deep history of British aviation as a new age of warfare dawned.

Other Western powers, including the United States and France, attempted mixed-powerplant interceptors but no one form ever made it to operational status. The aforementioned Avro Model 720 was completed only in a wind tunnel model, showcasing a planform not unlike the much larger passenger-minded Concorde airliner still to come. The Republic XF-91 "Thunderceptor" (detailed elsewhere on this site), with its strange-looking inverse tapered wing mainplanes , was one American contribution to the field and two prototypes were built for the program. The SNCASO "Trident" and SNCASE "Durandal" were notable French contributions - both are detailed elsewhere on this site.
Advertisements

(Showcased performance specifications pertain to the base Saunders-Roe SR.53 production variant. Compare this aircraft entry against any other in our database or View aircraft by powerplant type)
PROPOSED:
2 x de Havilland Firestreak air-to-air, infra-red guided missiles on wingtip mounts. 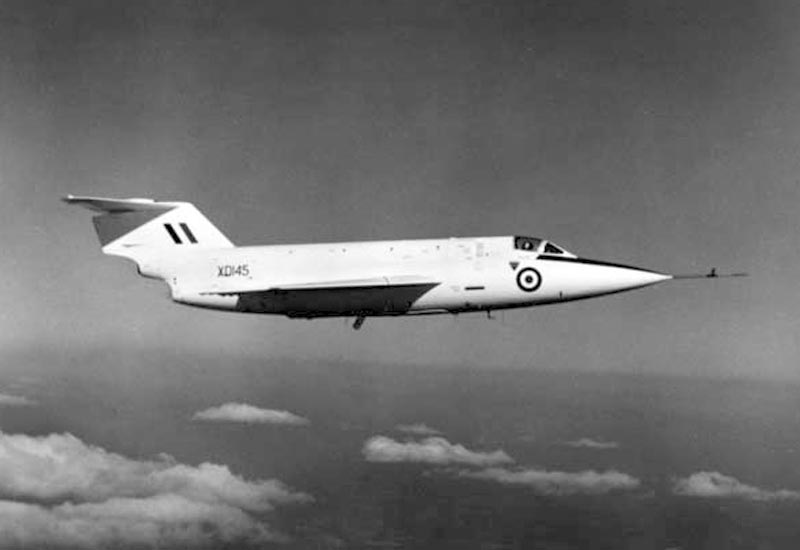