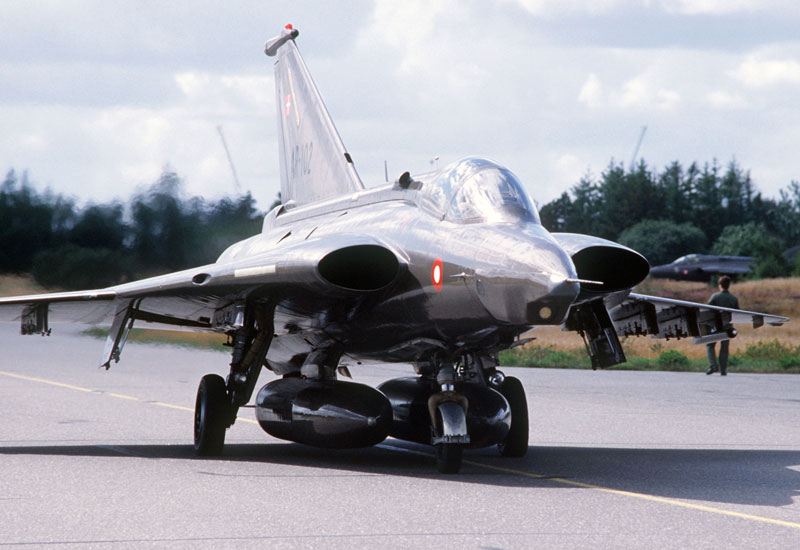 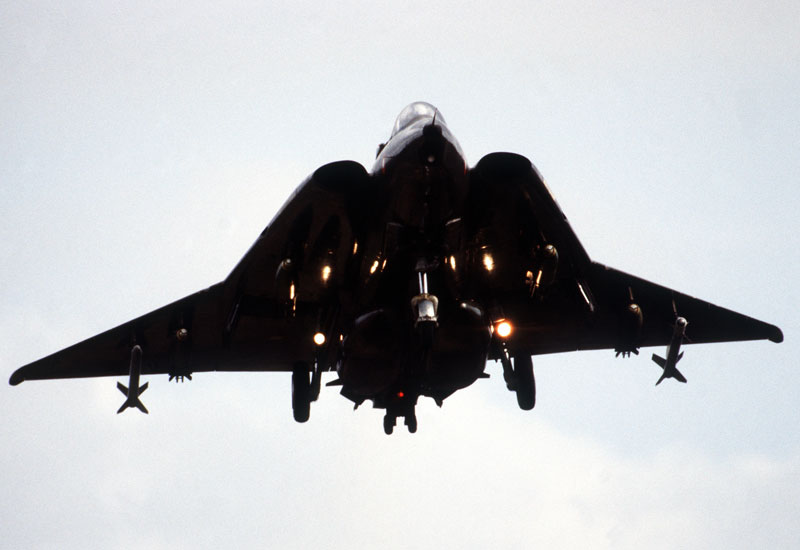 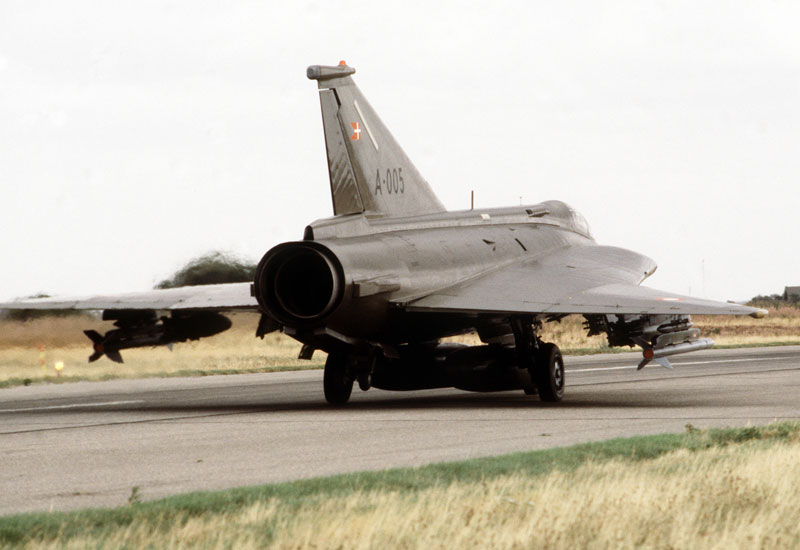 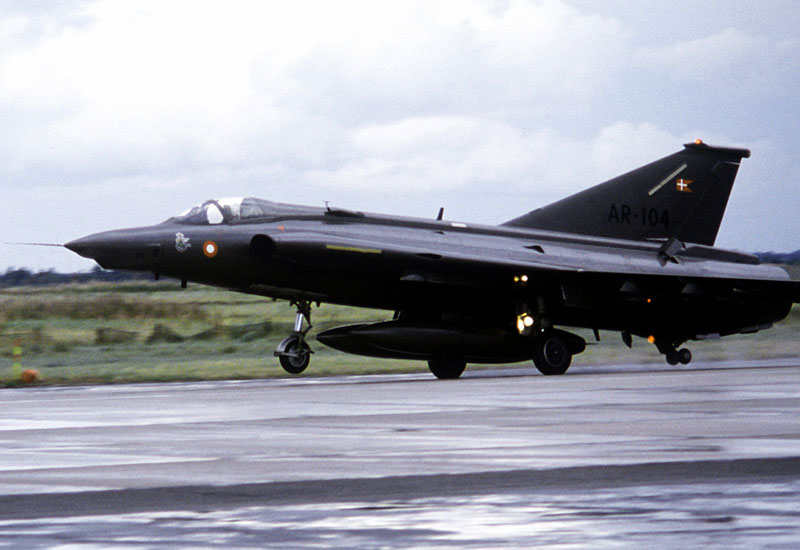 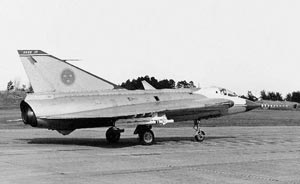 The Swedish-originated Saab J35 Draken was a design ahead of its time, producing the revolutionary double-delta wing mainplane configuration.

Authored By: Staff Writer | Last Edited: 07/23/2021 | Content ©www.MilitaryFactory.com | The following text is exclusive to this site.
The Saab J 35 Draken (translated in English to "Dragon" but carrying the meaning of "Kite" based on the aircraft's angular resemblance to a kite) was one of the more excellent aircraft designs to emerge from the Cold War. The aircraft proved a viable answer to the Swedish need for a high-performance interceptor on par or excelling beyond that of anything else being fielded throughout the world at the time. Drakens served from 1960 through 2005 and proved their worth in over 640 production examples. The "double delta" wing arrangement of the type itself proved revolutionary and undoubtedly added to the aircraft's top-flight capabilities.

By the end of the 1940's, the Swedish government was looking forward to the inevitable replacement of the successful Saab J 29 Tunnan line. A specification was put forth in 1949 requiring a new aircraft to provide one-half times more in maximum speed than what was being made available from any other platform entering service anywhere on the globe. This aircraft would also have to provide for a stellar-rate-of-climb as it would be commissioned to intercept incoming transonic enemy bombers. The already-demanding specifications also called for a large weapons capability, long operational endurance and the ability for the platform to operate from short runways as well as roadway surfaces. The latter request was more-or-less a standing requirement of all future Swedish-designed aircraft as well, for it was always envisioned that such aircraft would be responsible for the defense of the country by any means necessary - this meaning that the aircraft could be flown from straight short stretches of Swedish highways for an optimal reach to its combat capabilities.

Erik Bratt led the design team at Saab to fill the requirements of the specification. The selected form became a delta-type wing arrangement known more specifically as a "double delta" (or even "compound delta"). The double delta design was just that - two paired delta wings working in conjunction with one another - one pair was set forward exhibiting a sharper sweep angle and less area than the aft pair, which showcased a more gradual sweep angle. This marriage allowed the new aircraft to promote good handling at both high and low speeds as each set of wings benefitted such flight speeds. Delta wings, at their core, inherently allowed for greater fuel capacity, low-speed stability and a greater weapons load. In comparison, the contemporary Lockheed F-104 Starfighter utilized short stubby wings no more than inches thick, forcing fuel and the undercarriage to be stored in its tubular fuselage. Additionally, the Starfighter was relatively limited in its munitions-carrying capabilities, though its minimalist and single-minded "rocketship" design approached allowed the Starfighter to reach record-setting speeds.

The double delta wing arrangement of the new Saab was mated to a circular fuselage adorned with a single vertical tail fin and successfully tested in the Saab 210 "Lilldraken" ("Little Kite") - essentially a scaled down version of what was to become the full-size J 35 - on January 21st, 1952. A Rolls-Royce Avon (200/300 series) afterburning turbojet engine was selected to power the new aircraft and an agreement was reached to license-produce the powerplant in Sweden as the Svenska Flygmotor RM 6B/C. Three prototypes followed, all powered by the Avon 200 series (the first prototype sans afterburner), with first flight achieved on October 25th, 1955. The second prototype deserves note for its breaking of the sound barrier while in a climb, an unintentional feat but nonetheless showcasing the outstanding design principles of the aircraft. Seating accommodations allowed for a single operator positioned in the forward portion of the fuselage with excellent forward and side views. The undercarriage was of a conventional design featuring two main single-wheeled landing gears retracting outwards into each wing root and a single-wheeled nose gear retracting forwards. The air intakes - along with its double delta wing shape - were defining characteristics of the Draken, featuring elliptical openings to either side of the cockpit. The system eventually merged internally to feed the large single engine exhausting at rear. Short distance landings were further assisted by a deployable drag chute.

As a product of the Cold War, the Draken's armament centered in on its missile-carrying capabilities. Munitions were held on two underwing and two underfuselage hardpoints for a total weapons load of up to 6,393lbs (J 35F) - hardpoints were later increased to six total stations. Capabilities included the use of air-to-air rockets and air-to-air missiles in the form of Rb-24 Sidewinders (license-produced AIM-9P Sidewinders), Rb-27 and Rb-28 Falcons (license-produced AIM-4 Falcons). Other armament options became conventional drop bombs ranging from 55lbs to 1,000lbs and 12 x individually-mounted 135mm rockets. External fuel tanks could take the place of the underfuselage stores. To compliment the weapons array, two M-55 ADEN 30mm cannons mounted at either wing root (outboard of the intakes) were part of the short-range armaments package. Beyond the J 35D-models, all future Draken production models sported a single M-55 cannon to make room for additional avionics. When employing the double cannon layout, Draken pilots had access to 180 cannon rounds for both guns. This was reduced to 100 rounds when utilizing the single cannon configuration.

The Draken was designed from the outset as a dedicated interceptor. Traditionally, this often called for an aircraft with great top-line speed, tremendous rate-of-climb, and ranged weapons tracking and delivery leaving handling qualities as secondary. Despite this origin, the Draken was found to provide for more-than-adequate dogfighting capabilities thanks to its large wing area. The J 35 exhibited a sound turning action and its powerful Mach 2-capable engine meant it could keep pace with any modern fighter of the time. This not only made Drakens exceptional interceptors but also capable air-based defenders when fielded in the dedicated fighter role.
While the developmental 210 served as the "proof-of-concept" for the Draken series, the J 35 itself was released in a handful of major production variants. This began with the initial J 35A production models dedicated for the interceptor role and built to the tune of some 90 examples. Deliveries of the type began in 1959 and continued on through 1961. Two examples of the A-models existed, known as "Adam kort" and "Adam lang" (translating to "Adam short" and "Adam long" respectively) and were differentiated by the addition of a new afterburning system in a lengthened tail section for improved thrust performance. This modification occurred after the 66th production J 35A and necessitated the use of an additional diminutive set of landing wheels along the aft portion of the lower fuselage. This new landing gear arrangement (coupled with the Drakens large wing area providing inherent drag) also allowed for "tail down" landings.

The J 35B was the next Draken derivative produced in 73 examples from 1962 through 1963. The B-model was given revised gun sights and radar fully-integrated into the STRIL-60 digital combat management system, as well as collision-course radar and a data-link system.

The SK 35C represented up to 25 J 35A production models converted into two-seat trainers. These trainers sported tandem seating for instructor and student and were provided sans armament. The modification of SK 35C's was such that the aircraft could be relatively easily converted back to their A-model fighting forms if need be.

The J 35D followed as the third production Draken model in the series. New engines were fitted in the form of the Rolls-Royce Avon 300 (RM 6C under the Flygmotor production label) with afterburner. Production lasted from 1963 through 1964 in which 120 examples were supplied.

The S 35E became 60 reconnaissance production examples. These aircraft were fielded sans armament and associated radar systems to make room for five cameras in the nose assembly. Though mostly new-build aircraft, nearly half of the operational batch were converted from existing J 35D production models.

The J 35F became the definitive Draken interceptor, produced to the tune of some 230 aircraft between 1965 and 1972. Cannon armament was reduced to 1 x M-55 ADEN 30mm cannon in an effort to add more important avionics facilities. A revised avionics, radar and weapons suite along with improved electronics all greeted the new Draken variant. The weapons suite consisted of a Hughes-designed automatic control system, pulse Doppler radar and provisions for the Hughes Falcon air-to-air missile family. The J 35F-II represented the J 35F model with a Hughes-brand infrared sensor. F-models eventually gave way to the much-improved Saab JAS Gripen multi-role fighters.

The J 35J were 66 J 35F models brought up to a new 1985 government standard in an effort to keep the Draken relevant. These aircraft were differentiated by their updated electronics and cannon, additional weapon pylons for AIM-9 air-to-air missile support and an increase to fuel capacity. J 35J's were essentially overtaken with the arrival of the Saab Viggen.

Due to Sweden's strict export policies, the Draken only served with a handful of nations, severely limiting the type's reach and, quite possibly, a more storied history. Beyond Sweden herself, operators included Austria, Denmark and Finland. The J 35H was a proposed export model but never produced. The J 35OE were 24 re-furbished J 35D models bought back by Saab to re-sell to Austria. Austria became the last global operators of the Draken, retiring their aircraft as recently as 2005. Denmark received the 35XD model designation and consisted of the F-35 strike fighter, TF-35 two-seat trainer and the RF-35 reconnaissance platform. Denmark modified their Drakens to fulfill (albeit to a limited extent) the strike role, offering provision for the AGM-12 Bullpup air-to-surface missile. Finland operated the Draken under the designations of 35BS, 35CS and 35DS. These designations essentially signified their respective Saab production models (J 35B, SK 35C and J 35D). The National Test Pilot School at the Mojave Spaceport in the United States owns at least six Drakens obtained from Denmark.

Several modifications were proposed for the Draken to make it into a dedicated strike fighter for the interim while Saab completed development and production of its JAS 39 Gripen multi-role fighter. Production of the Saab J35 ran from 1955 through 1974 to which some 644 total examples were delivered. All Saab J35 Drakens have since been retired from military service units worldwide. Denmark retired their Drakens in 1993 while Sweden followed in 1999. Finland operated the type up to 2000 while Austria serviced theirs until 2005 (the latter succeeded by F-5 Tiger II jets).

OPTIONAL:
Mission-specific ordnance could include any of the following munitions up to 6,400lb on four (later six) external hardpoints:

Values are derrived from a variety of categories related to the design, overall function, and historical influence of this aircraft in aviation history.
Overall Rating
The overall rating takes into account over 60 individual factors related to this aircraft entry.
80
Rating is out of a possible 100 points.
Firepower Index (BETA)