Authored By: Staff Writer | Last Edited: 04/30/2021 | Content ©www.MilitaryFactory.com | The following text is exclusive to this site. 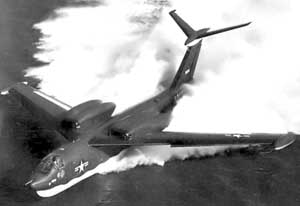 The Cold War (1947-1991) period was one of technological advancement whose momentum was driven by developments during World War 2 (1939-1945). In the early 1950s, the United States Navy worked in concert with the Glenn L. Martin Company aviation firm to produce a new jet-powered, nuclear-capable flying boat of considerable performance and capabilities. The aircraft would retain its aircraft qualities about her while also incorporate a boat-like hull/fuselage which would allow it to land and take-off from water. In this way, the USN could now field its own fighting force of nuclear-carrying strategic bombers without reliance on the fleet being managed by the United States Air Force. Flying boats promised tactical flexibility in the field and could prove more mobile than land-based bombers - able to undertake surprise attacks against the heart of the Soviet Empire in short order.

The formal requirement for the aircraft came in April of 1951. It called for a jet-powered aircraft capable of top-flight speeds over water with a 1,500 mile operating range. Its internal payload carrying capacity would be in the 30,000lbs range.

The USN entertained submissions from both Martin and competing Convair and elected with the former's design. A contract then followed calling for a pair of prototypes to be constructed for testing. The prototypes were designated "XP6M" with the initial mark being "XP6M-1". The USN ultimately envisioned a complete fleet of twenty-four jet-powered flying boats by program's end - a total never to be realized. The aircraft carried the name of "SeaMaster".

The Martin design showcased a deep fuselage approach for the necessary hull shape and internal bomb load. The flight deck sat high at the frontal section with a single vertical fin at the tail. The horizontal tailplanes were high-mounted and produced the classic "T" style tail unit. Wings were shoulder-mounted assemblies to supply the necessary clearance on water as well as provide inherent lifting qualities. The wings were given considerable sweepback and displayed a noticeable droop when at rest. Engineers focused on a pair of Curtiss-Wright ramjets at first thought their complexity soon resulted in the selection of 4 x Allison J71-A-4 turbojets instead. These engines were then mounted above aircraft wingroots as paired nacelles. Despite it being a water-borne system, the aircraft was still given a retractable wheeled undercarriage to allowed it to land on prepared runways - in effect doubling its in-theater value.
Advertisements

Prototype XP6M-1 made its first flight on July 14th, 1955 and resulting data collected forced changes to the engine placement. This prototype was then lost on December 7th, 1955, when the aircraft disintegrated mid-flight with the loss of all four crew aboard due to a failure in the tail unit. The second prototype then followed in a first flight recorded on May 18th, 1956. It too, however, suffered a catastrophic failure in the tail unit. In this case, all four crew exited the aircraft safely.

Undeterred, the USN SeaMaster program continued and resulted in the YP6M-1 pre-production model of 1957. The example began its testing phase the following year which ultimately revealed several major shortcomings of the design as a whole. The aircraft was of a heavy configuration and this was coupled to poor controls and underpowered engines unsuitable for on-water/over-water operation. Five additional airframes were ordered and changes instituted for the better: the Allison engines were given up in favor of 4 x Pratt & Whitney J75 turbojets which promised more power and vision out-of-the-cockpit was improved as was the avionics suite. An in-flight refueling probe was added to help increase the operational reach of the aircraft.

This revised design emerged as the "P6M-2" and eight total airframes followed. By this time, however, the bloated and oft-delayed program has met its end - cancelled before operational service was reached. The USN elected to fund its ballistic missile submarine program instead and all remaining SeaMaster airframes were scrapped and lost to naval aviation history.

As completed, P6M-2 featured an overall length of 134 feet, a wingspan of 103 feet and a height of 32 feet, 5 inches. Its operating crew was four including two pilots. Primary armament was a 4,000lb bomb load while point-defense was handled by a 2 x 20mm cannon arrangement in a tail turret. The aircraft weighed 91,300lbs when empty and showcased a Maximum Take-Off Weight (MTOW) of 176,400lbs. Power from the finalized 4 x Pratt & Whitney J75-P-2 turbojets outputted at 17,500lbs thrust each and allowed for a maximum speed of 630 miles per hour, a range out to 2,000 miles and a service ceiling up to 40,000 feet.
Advertisements

(Showcased performance specifications pertain to the base Martin P6M SeaMaster production variant. Compare this aircraft entry against any other in our database or View aircraft by powerplant type)
STANDARD:
2 x 20mm automatic cannons in tail turret emplacement. 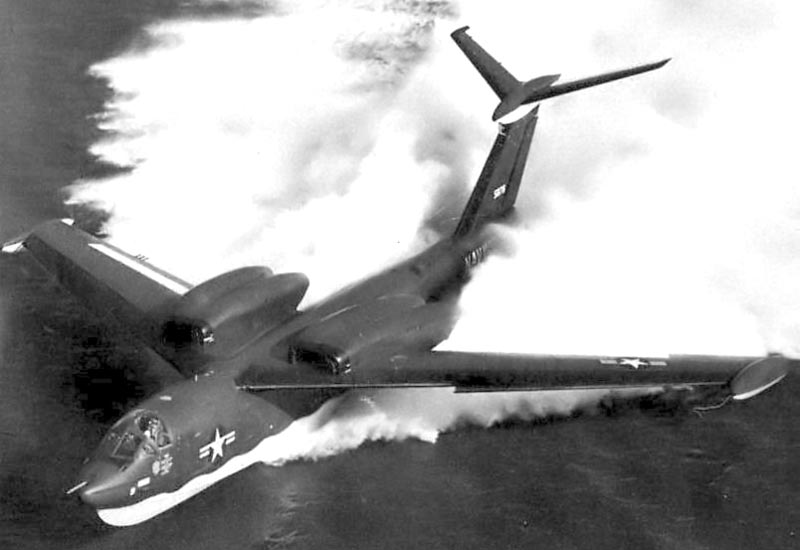