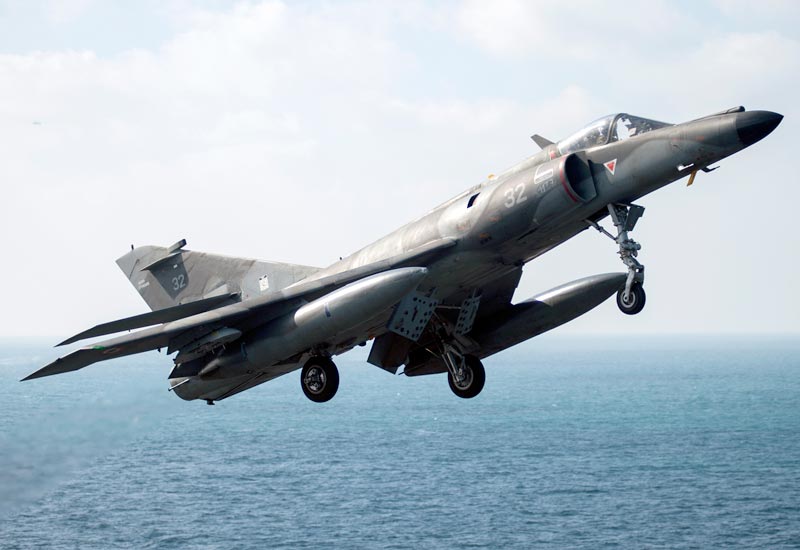 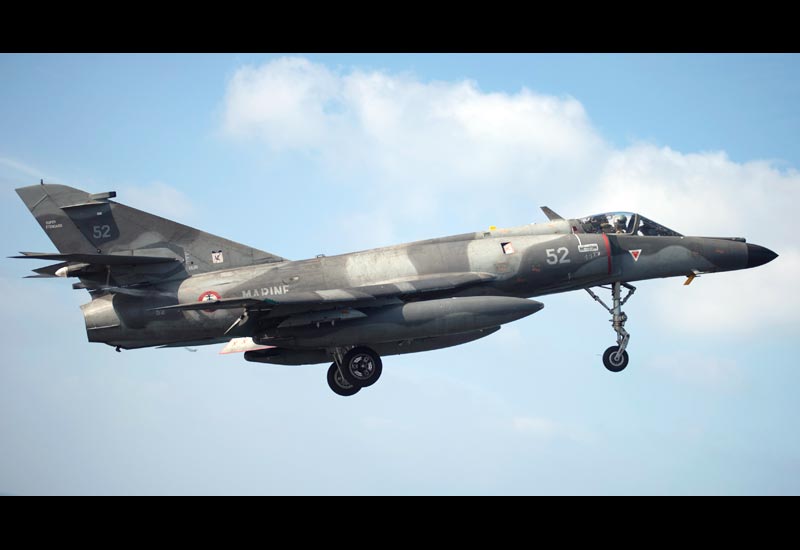 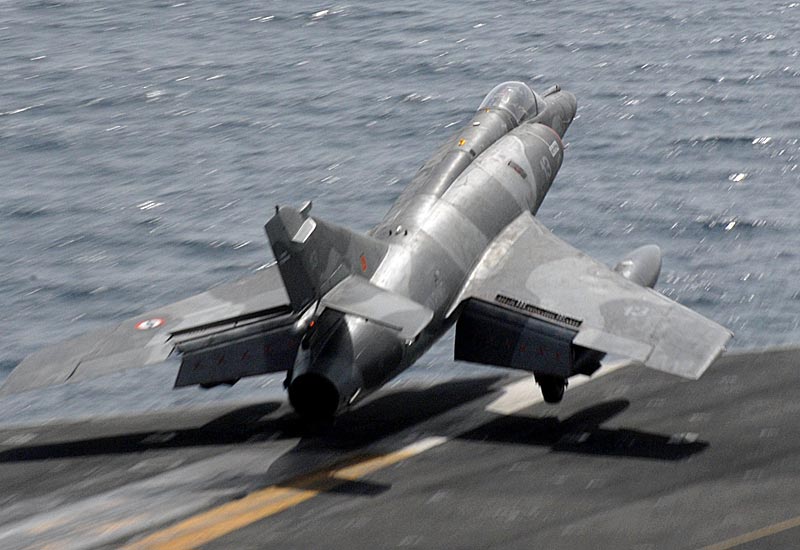 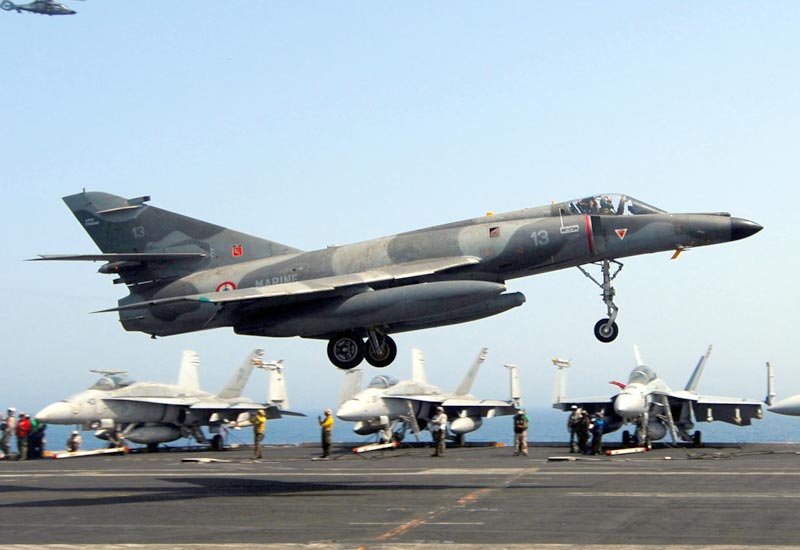 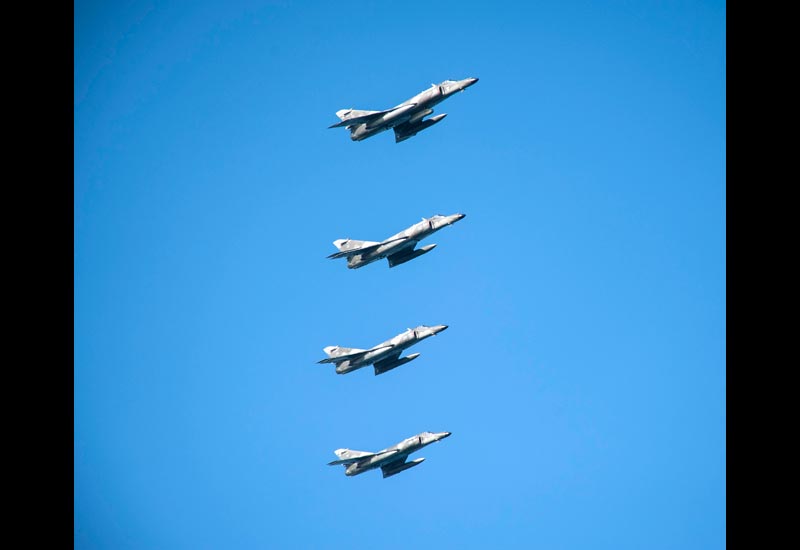 The French Dassault Super Etendard naval strike fighter was a further development of the original Dassault Etendard IV strike platform of the 1960s.

Authored By: Staff Writer | Last Edited: 06/21/2018 | Content ©www.MilitaryFactory.com | The following text is exclusive to this site.
The French Navy adopted the original Dassault Etendard ("Standard") (detailed elsewhere on this site) in both its IVM strike fighter and IVP photo-reconnaissance forms during the early 1960s and total production reached ninety units. This single engine, swept-wing, jet-powered design - Dassault's first in the realm of naval aircraft - led a good healthy life in service with the French and, when it came time to seek a successor, thought turned to a navalized strike variant of the SEPECAT Jaguar, the "Jaguar M". However, politics doomed this variant and an advanced, more powerful form of the Etendard was developed and taken into service instead. This became the "Super Entendard" which was added to the French Navy inventory in 1978 and saw considerably better operational exposure through several overseas customers.

Super Etendard Development
The Super Etendard was a further development of the Etendard IVM though it was up to 90% an all-new aircraft. Like its predecessor, it was specifically designed with carrier deck operations in mind so this required folding wings, a reinforced undercarriage and an arrestor hook under the tail. Much of the form and function of the Etendard IVM was retained including its swept-back wing mainplanes, its mid-mounted tailplanes, single tail fin rudder and side-mounted intakes. The design was a single-engine, single-seat effort by the company and an overall improvement to the family line. Its primary mission sorties would revolve around strike duties with a secondary interception capability.

To begin with, the original SNECMA Atar 8B turbojet engine of 9,700lb thrust output was replaced by the more powerful SNECMA Atar 8K-50 series of 11,025lb thrust. The unit was buried within the mid-to-aft fuselage section and raised the aircraft's maximum speed from 683 miles per hour to 750 mph. Range, in turn, was reduced from 2,100 miles to 1,130 miles. Its service ceiling could reach 44,900 feet which was also less than the Etendard IVM's 50,900 foot limit. Rate-of-climb remained 19,700 feet-per-second.

Armament
Internally, the aircraft carried the usual Dassault fixed gun arrangement of 2 x 30mm DEFA cannons and 125 projectiles were afforded to each. The weapons were arranged in a side-by-side configuration with the mechanical component and ammunition box set between them (the weapon system could be removed as a complete module for repair / maintenance). Beyond this, there were four underwing and two under-fuselage hardpoints for carrying air-to-air missiles, air-to-surface (including anti-ship) missiles, drop bombs (guided or unguided) and 18-shot Matra rocket pods. Of course some of the hardpoints were also plumbed for fuel delivery and supported jettisonable fuel tanks (a retractable receptacle at the nose was also fitted to allow for air-to-air refueling). The Super Etendard also had provision to carry and deliver the AN-52, a free-fall nuclear-tipped bomb in case of total war with the Soviet Union - the enemy of the West during the Cold War period (1947-1991).

In comparison, the original Etendard IVM had just four external hardpoints which limited its war-making potency to an extent.
Other Improvements
Benefitting from operational data from the then in-service Etendard, Dassault engineers were able to perfect the original design by reinforcing its structure for the rigors of carrier deck operation. Take-off actions were aided by the new engine fit as well as revised wing and flap surfaces. Additionally, the weapons suite was updated for the better and increased accessibility to more modern weaponry and tracking/engagement systems. A Thomson multi-mode radar was part of the new equipment installed on the new strike platform.

Development (Contd) and Delivery
A prototype Super Etendard made its first-flight on October 28th, 1974 and service introduction followed a time later in June of 1978. The French Navy was the first, and most notable, operator of the series and eighty-five total aircraft were produced from the span of 1974 until 1983 (100 aircraft were originally required but this total was cut down for budgetary reasons). As with the Etendard IV series, the Super Etendard served with the two French Clemenceau-class aircraft carriers of the day - FS Clemenceau and FS Foch - and formal service began in February of 1979. The Super Etendard stocked three operation squadrons of the French Navy and a training group was also added. In service, they were fielded alongside Vought F-8 Crusaders which retained their primary air-to-air operations.

Combat Deployments
The French Navy used their Super Etendards in anger for the first time during "Operation Olifant" over Lebanon against Syrian forces. This marked their primary exposure to direct combat when flying under the French flag. The service gave up their Super Etendards as late as 2016 for the line was replaced by the navalized version of the Dassault Rafale - an all-modern 4th Generation multirole fighter mount (detailed elsewhere on this site).

The Argentina Navy agreed to purchase some fourteen Super Etendards from France in 1979 when it could not keep up its Douglas A-4 "Skyhawk" fleet due to an American arms embargo. Along with this, the new fighters were delivered with the French Exocet anti-ship missile which gave regional observers pause. This was of particular importance when the fighter was used in anger against British warships during the Falklands War of 1982. The aircraft, and their potent missiles, proved effective enough to put British warships and warplanners on edge for the duration of the war - which still ended as a British victory. Argentine Super Etendards were modernized by France by cannibalizing the outgoing French Navy Super Etendard fleet. Not all were brought up to the new standard due to various outlying issues though more ex-French Navy Etendards were added to the Argentine fleet as recently as 2017. However, it appears that the entire Argentine Super Etendard fleet is inoperable as of this writing (November 2017) with the new airframes used only for training and as spares.

The oil-rich nation of Iraq was loaned about five Super Etendards from France in 1983 as an interim measure pending delivery of Dassault Mirage F1 fighters. These, too, were sought for their ability to effectively deliver the Exocet missile which gave such a good showing in the Falklands War - and now threatened neighboring Iran's dealings in Persian Gulf waters. Attacks on Iranian ships followed soon after deliver in 1984 and these aircraft were eventually joined by Mirage F1 fighters. From then on, there proved various clashes in the air between Iraqi and Iranian combat fighters with losses accrued by both sides. Super Etendards in Iraqi service were retired in 1985 and four examples were returned to France, the assumption being that at least one was lost in combat at some point.

(Showcased performance specifications pertain to the base Dassault Super Etendard production variant. Compare this aircraft entry against any other in our database. View aircraft by powerplant type)
STANDARD:
2 x 30mm DEFA internal cannons

(Not all ordnance types may be represented in the showcase above)
Hardpoint Mountings: 6 (two under-fuselage and four underwing)

Values are derrived from a variety of categories related to the design, overall function, and historical influence of this aircraft in aviation history.
Overall Rating
The overall rating takes into account over 60 individual factors related to this aircraft entry.
36
Rating is out of a possible 100 points.
Relative Maximum Speed
Hi: 750mph
Lo: 375mph
This entry's maximum listed speed (749mph).