The Aurora Orion program promotes a drone with 120-hour endurance and operational altitudes of 20,000 feet - outdoing many of inherent capabilities of other UAVs. 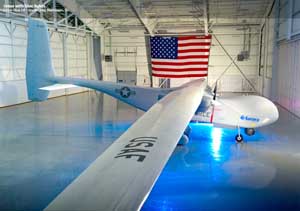 In the world of Unmanned Aerial Vehicles (UAVs) - popularly referred to by their generic collective name of "drone" - the challenge exists to produce a capable Medium-Altitude, Long-Endurance ("MALE") platform that fits well into military procurement budgets and long-term operational costs. Currently there exist a few notable "in-development" long-endurance examples led primarily by the Boeing "Phantom Eye" and joined by the AeroVironment Global Observer, both multi-engine solutions driven by hydrogen power. A relatively new contender in the MALE arena has become the "Orion" presented by Aurora Flight Sciences of Manassas, Virginia. The aircraft is currently (Sep 2013) in development and intended to promote 120 hour endurance while carrying a payload of 1,000lb in the 20,000 feet altitude envelope.

The inherent benefits of a long endurance, unmanned aerial vehicle are obvious when one considers the reduced costs involved in a platform not having to consistently return to base, land, refit and refuel before continuing its same mission. The unmanned nature of such systems also does not expose a pilot to unnecessary dangers when traversing over enemy territory. Add in the advanced capabilities of autonomy and a modern MALE UAV can complete multiple missions with reduced manpower committed to its operation and at lower operating costs due to the lessened need for repeat landings in a single sortie. As it stands, the Orion has taken its first steps in fulfilling the proposed "120/1,000/20,000" project goals which fall in line with the American military as it looks to high-endurance unmanned vehicles more and more. The possibility of military (as well as civilian) applications for such systems continues to grow.

It should be stressed that the Orion is seen as more of a surveillance-minded platform (more in line with the Northrop Grumman Global Hawk family) and not an armed hunter as in the Predator line.

Aurora Flight Sciences was founded in 1989 by engineer John S. Langford III and currently employs some 350 persons across four primary locations. The concern began with development of UAV systems for the purpose of data collection as it relates to climate change. It has also been a contributor by way of components for the Northrop Grumman Global Hawk program as well as several active-service Sikorsky helicopter products. It has also evolved its in-house line of UAVs covering the Perseus, Theseus, Chiron, MarsFlyer, the GoldenEye, Excaliber, the SunLight Eagle, Odysseus and, of course, the new Orion.
Advertisements

The Orion takes on a conventional aircraft shape which incorporates a centralized fuselage assembly, monoplane wings and a traditional tail unit. The fuselage somewhat oversized in its appearance to accommodate mission equipment, avionics, fuel stores and the like while showcasing slab sides and an aerodynamically refined nose section (in some ways mimicking the Global Hawk). The wings are straight in their shape, flexible and of a long span, designed as a single-piece carbon-fiber appendage sitting high atop the fuselage to generate sufficient lift and help in clearance for the engines. One engine nacelle is slung under each wing unit and set close to each fuselage side. The fuselage then tapers upwards heading aft to a rounded stem which holds the tail unit. The tail unit consists of a single vertical rudder and a pair of forward-set horizontal planes. The undercarriage is only partially retractable in that the nose leg (a single-wheeled unit) retracts rearwards into the fuselage while the main legs (single-wheeled) are fixed in place while its wheels are shrouded over in aerodynamic covers. Propulsion is through 2 x Austro Engine AE300 series turbo-diesels which are seen as fuel efficient solutions for an airframe of this size and mission scope and also allows the Orion to consume traditional aviation fuel (and not hydrogen as in the Phantom Eye/Global Observer).

The Orion holds origins in a 2006 United States Army initiative originally calling for an unarmed, hydrogen-powered, aerial surveillance platform to fulfill a High-Altitude, Long-Loiter ("HALL") requirement. It was in 2008 that Aurora approached the United States Air force in an attempt to interest the branch in a medium-class version of its Orion product, revised to operate under conventional diesel propulsion. With sufficient interest garnered, the USAF granted a developmental contract for further research of the Orion MALE.

As it stands, the Orion is expected to offer much in the way of autonomy and modular payload functionality. In the military scope, the aircraft will be utilized strictly for the surveillance / reconnaissance / intelligence gathering role (as in the Global Hawk) and its payload will reflect this through use of specialized camera, optics, sensors and collection equipment (i.e. the Orion is not intended as an armed "Hunter-Killer" UAV/UCAV). The program goal is to provide excellent endurance with payload-carrying capabilities comparable to the proven General Atomics Predator series which have provided useful service to American forces operating over Afghanistan and Iraq.

December 2014 - It was reported that the Orion completed 80-hour flight, challenging a world endurance record for unmanned aircraft. The new record is expected to be recognized in early 2015 by the National Aeronautic Association. By this time, the Aurora UAS has completed nearly 20 flights and is showing some cost-savings in operating a MALE UAV.

January 2016 - It was announced that the Orion may compete in a new ISR UAV requirement to coexist alongside the in-service Predator and Reaper fleets.

April 2017 - The Orion may contend for a role in the "Trump Border Wall program", particularly in monitor activities over water in the Gulf of Mexico and Caribbean regions. The sole completed example will be tested by the United States Air Force and U.S. Coast Guard services. Additionally, the Orion is being marketed to the Department of Homeland Security for marine border protection. Aurora is teaming up with Big Safari to develop a Block 1 version of its aircraft for limited production.

(Showcased performance specifications pertain to the base Aurora Flight Sciences Orion production variant. Compare this aircraft entry against any other in our database or View aircraft by powerplant type)
2,600 lb surveillance payload. 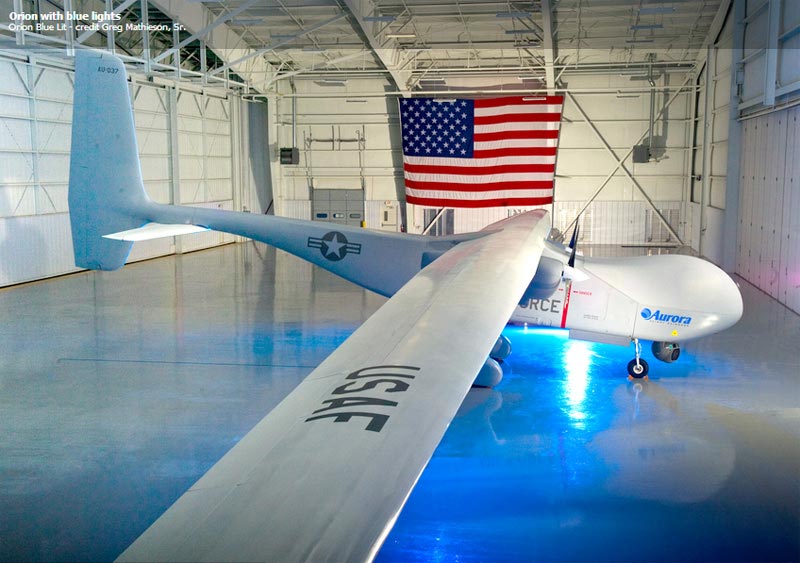 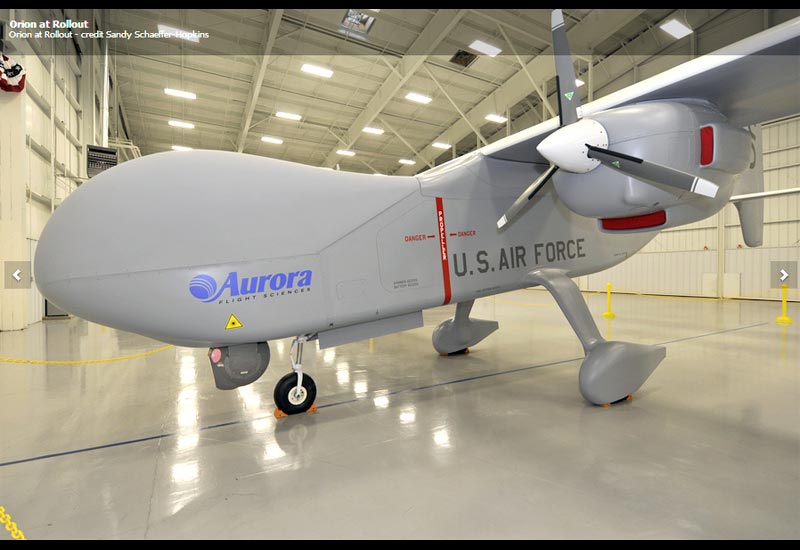