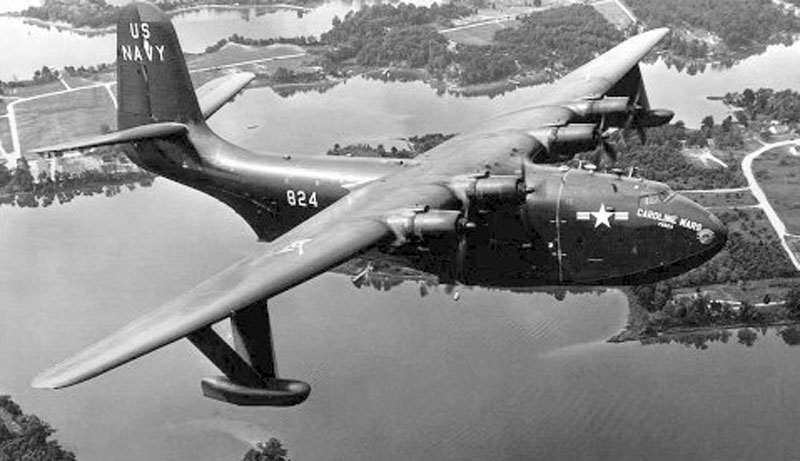 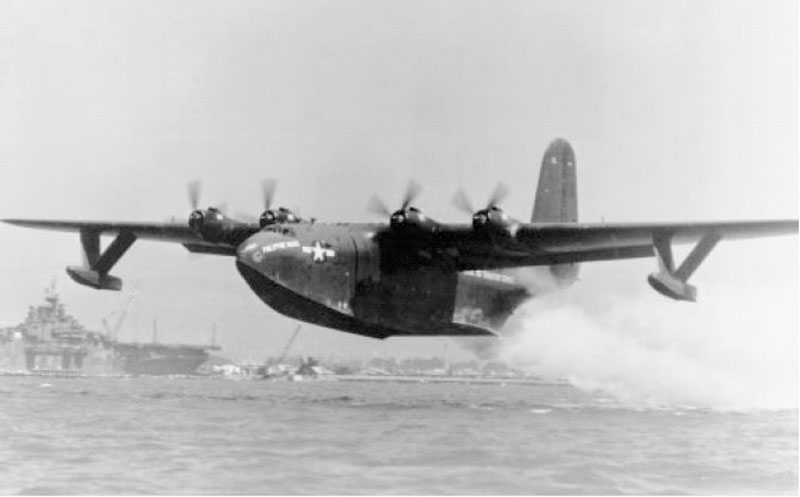 The Martin JRM Mars began as an armed patrol bomber for the US Navy until modified for the unarmed transport role during World War 2.

Authored By: Staff Writer | Last Edited: 05/11/2016 | Content ©www.MilitaryFactory.com; the following text is exclusive to this site.
World War 2 proved the swan song for the flying boat, large aircraft granted boat-like hulls and high-mounted wings to allow for efficient take-off and landing on water. While slow and ponderous beasts, these vehicles exhibited excellent inherent operational ranges and could access runways wherever there stood enough distance on water for these aircraft to become airborne or land. The Glenn L. Martin Company, founded in 1912, produced the largest Allied flying boat of the war when it introduced their "JRM Mars" model line - a series born as a further evolution of the "PBM Mariner" which was itself introduced in 1939. The JRM Mars was commissioned by the United States Navy for use as an overwater patrol bomber and assigned the developmental designation of "XPB2M-2 Mars" (company designation of "Model 170"). First flight was on June 23rd, 1942.

The prototype XPB2M-1 Mars retained the basic form and function of the preceding PBM Mariner line including its deep boat-like hull, wide spanning wings and twin-vertical tail fins - it was essentially an oversized version of the Mariner with power was served through 4 x Wright R-3350-8 radial piston engines. The Mars was completed in November of 1941 though a fire originating at one of the four engines cause enough damage to delay a first flight until June of the following year. Requisite evaluations followed before the aircraft was formally adopted by the United States Navy on November 30th, 1943.

By this time, America had been at total war since January of 1942 following the events of Pearl Harbor on December 7th, 1941. Expectedly, the war evolved at a quickening pace and, with it, various technologies and doctrines concerning all manner of warfare. The idea of large flying patrol boat bombers was now lost with this role fulfilled by other proven multi-role platforms whose ranges had been improved considerably from the start of the war. The US Navy, therefore, really held no requirement for the new Martin patrol bomber but thought enough of the design to place an order for twenty of the type. Their roles were altered slightly to be utilized as an overwater transport and given the new developmental designation of "XPB2M-1R". The original Martin prototype was then converted to a revised form in December of 1943 without its intended armament provisions, a lengthened hull and a more conventional single rudder tail fin. The hull was reinforced for cargo and various installations were added to facilitate the movement of goods from in and out of the aircraft. Power were served through 4 x Wright R-3350-24WA Cyclone radials. Production forms were given the finalized designation of "JRM-1 Mars" (Martin company "Model 170A").

As work ramped up on completing the original US Navy order, the war favored the Allies throughout 1944 which led to the fall of Germany in May of 1945 and the fall of the Japanese Empire in August. By this time, the first JRM was already in US Navy hands (June 1945) though several other airframes lay on Martin assembly lines awaiting completion. With the wartime requirement all but over, the US Navy curtailed their original 20-strong contract and ended up procuring just six of the type in total. Aircraft were given rather distinct individual names - all based on Pacific islands -beginning with the original "Hawaii Mars". This was followed by the "Marianas Mars", the "Philippines Mars", the "Marshall Mars", the "Caroline Mars" and another "Hawaii Mars" (the original Hawaii Mars was lost to accident in 1942, allowing for the replacement aircraft to be named as such). Deliveries of Mars aircraft concluded into 1947. The Caroline Mars became the final Mars airframe completed by Martin and handed the new "JRM-2" primary designation for it came outfitted with 4 x Pratt & Whitney R4360-4T radial engines of 3,000 horsepower each driving four-bladed propeller assemblies.
Outwardly, the Mars series of aircraft was typical of flying boat designs of the period. The fuselage managed a deep boat-style hull for its required water landings. The flight deck was high-mounted in its placement with excellent viewing over the nose and to either engine pairing along the wing leading edges. Wings were straight in their general shape with curved tips and high-mounted along the fuselage spine. The aircraft was powered by four radial piston engines across individual nacelles with two engines per wing. Each wing was also given a two-strutted pontoon to support the assemblies on water and prevent tipping of the aircraft. The fuselage tapered at the empennage in the usual way with a raised tail unit mounting horizontal planes set low on the tall, curved tail rudder. Dimensions included a length of 117 feet, wingspan of 200 feet and height of 38 feet, 5 inches. Total wing area was 3,686 feet squared. Internal volume allowed the aircraft to haul up to 32,000lbs of cargo including 133 combat infantry or seven light vehicles. In the MEDEVAC role, the Mars could provide transport to 84 injured as well as medical staff numbering 25. Empty weight was 34,280lbs with a maximum take-off weight of 74,800lbs. Top speed was approximately 220 miles per hour with a cruising speed of 190 miles per hour, range out to 5,000 miles and operating ceiling of 14,600 feet. The Caroline Mars was noteworthy in having set the passenger-hauling world record in flight when it transported 269 persons from San Diego, California to Alameda, California on March 4th, 1949.

The four original JRM-1s were eventually upgraded to the new "JRM-3" standard which saw their engines replaced by 4 x Wright R3350-24WA series radials of 2,400 horsepower each. The inboard engines were now fielded with reversible-pitch units for more precise controlling. With the end of the war, the retained Mars aircraft continued in its transport services role within the United States Navy until about 1956 when they were retired from active service. In 1959, four of the aircraft were purchased by a Canadian fire-fighting concern. The Marshall Mars was lost on April 5th, 1950 when it caught off the coast of Honolulu, Hawaii, leaving just four remaining flyable Mars aircraft. On June 23rd, 1961, the Marianas Mars followed when it crashed while fighting a fire in British Colombia - killing all four of her crew. The Caroline Mars was eventually lost on October 12th, 1962 to Typhoon Freda. This now left two - the second Hawaii Mars and the Philippines Mars - to carry the torch.

The remaining aircraft continued in their fire fighting roles into 2003 to which its owners unloaded the types to another Canadian fire -fighting concern. The Philippine Mars is now destined for permanent exhibit at the Naval Aviation Museum in Pensacola, Florida leaving the second Hawaii Mars as the only flyable Mars aircraft in the world.

Canada; United States
(OPERATORS list includes past, present, and future operators when applicable)
✓ Ground Attack (Bombing, Strafing)
Ability to conduct aerial bombing of ground targets by way of (but not limited to) guns, bombs, missiles, rockets, and the like. ✓ Maritime / Navy
Land-based or shipborne capability for operating over-water in various maritime-related roles while supported by allied naval surface elements.

(Showcased performance specifications pertain to the Martin JRM-3 Mars production variant. Compare this aircraft entry against any other in our database)
None. Original patrol bomber would have been outfitted with defensive machine guns and held provision for bombs in the internal bay.