One of the most fascinating and unorthodox of all the viable German jet-powered designs was the coal-burning Lippisch P.13A delta-winged interceptor.

Authored By: Staff Writer | Last Edited: 12/29/2021 | Content ©www.MilitaryFactory.com | The following text is exclusive to this site. 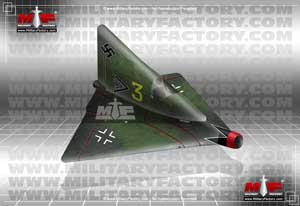 Alexander Lippisch (1894-1976) became an important figure in aviation research, having earned his "wings" as an aerial photographer during World War 1 (1914-1918). Lippisch's greatest claim to fame would become the famous Messerschmitt Me 163 "Komet" rocket-powered interceptor which entered operational service with the German Luftwaffe in World War 2 (1939-1945). Throughout the war, Lippisch continued his ground-breaking work and developed some of the more fantastical of the German "paper airplane" designs - holding a strong belief in his creations to the end and delving ever-deeper into the world of delta- and flying-winged flight. Lippisch would eventually come to work for the United States in the post-war world and develop his concepts even further before passing away in Iowa at the age of 81.

The Lippisch Li P.13A was a project centered around supersonic flight through a unique airframe shape and ramjet-provided thrust. Lippisch set to work on a peculiar model that was unlike any of the war, an airframe whose general shape was akin to a diamond or triangle intended to incorporate the swept-back wing surfaces and low aspect ratio needed for supersonic travel at speeds beyond Mach 1.0. The P.13A was the embodiment of his thinking, situating the single-seat cockpit at the center of the design and as part of the frontal face of a large dorsal rudder. The fuselage was flat from a side profile and triangular from the overhead perspective, essentially a tailless "flying wing" had the dorsal rudder been removed. Wings were swept-back at an angle of 60-degrees to provide the best balance of high-speed flight and stability at those speeds. The engine would be buried in the fuselage under the cockpit floor and the installation would run with ductwork from nose to tail. The nose was a cylindrical intake port with the engine exhausting through a conventional nozzle at the base of the rudder. The fuselage would house the needed avionics and fuel stores. Developed from the outset as a technology demonstrator intending to prove the viability of several qualities (supersonic flight, excellent operational ranges through a streamlined design and low-cost operation), the P.13A surely looked to become one of the more important aviation products in history.

However, the situation heading into 1944 presented a different sort of Germany, one embroiled in a war along two fronts against multiple enemies. The Allied bombing campaign in the West was taking its toll on German infrastructure and its positions in German-held territories. In the East, the Soviet Union was amassing greater forces on a seemingly daily basis to enact thunderous offensives against battle-weary German Army troops. It would seem, from this point forward, that a defensive stand was the growing call of the day for Germany. Add to this that resources were proving scarce and talent was committed to critical projects that could be put to use immediately for the Reich, there proved little time for fanciful innovation.

With the current state of things as they were, Lippisch moved his P.13A along project under the guise of it being an interceptor project. The program suffered an early setback when the model was destroyed in an Allied air raid over Vienna. Regardless, enough of the program survived to keep the P.13A initiative alive for the interim. To power the airframe - and due to strict resources control of conventional fuels - Lippisch decided upon a coal-burning ramjet engine by Kronach to power his triangular fighter. Take-off would have been assisted by jettisonable rockets, allowing the vehicle to reach the minimum required 150mph speed before committing to the ascend. From there, Lippisch reasoned his creation could advance to 400 miles per hour as its maximum speed. Range would be 1,000 miles on one ton of coal fuel, utilizing the special airframe in conjunction with its ramjet propulsion for maximum efficiency. Tests were undertaken through a powerless research glider known as the "DM-1".
Advertisements

Ramjet propulsion was essentially an offshoot of the jet, intended to utilize the basic forward motion of a speeding aircraft in flight to help compress incoming air without a rotary compressor component. The air entered the engine through an inlet in the usual way, was compressed prior to fuel injection and ahead of a combustion chamber. Through a nozzle at the rear of the ramjet's design, the generated force was exhausted via a port in the normal way. Ramjets operated their best at supersonic speeds which made sense for Lippisch's project goal of supersonic flight. However, because ramjets lacked the traditional power of turbojets at low speeds (i.e. for taxiing and take-off procedures) such aircraft would have to be fitted with alternative thrust means for reaching the desired minimum speeds - hence the P13A's expected use of jettisonable rockets.

One of the more interesting design qualities of the P.13A would be its use of a coal supply (granule sized) situated within a wire mesh basket and set inside the intake duct. Science was the call of the day as a chain reaction was experienced within the duct to generate the required fuel, eventually producing carbon dioxide and ignited by a gas flame. The fumes produced from this action would then be mixed under high pressure and jettisoned through the exhaust port at the rear of the aircraft, generating the required thrust. The ramjet engine would be enacted at speeds in excess of 200mph which is why a rocket-assisted take-off was required.

Testing of a small scale P.13A were undertaken in May of 1944 outside of Vienna. By this time, the war in Europe had come to a close and United States ground forces had moved in to claim much of Lippisch's work regarding his P.13A. He and his design team were charged by American authorities with finishing the P.13A project for the benefit of United States research. To this end, the coal-burning powerplant was completed and successfully tested and the airframe proven viable. Lippisch was eventually absorbed into the American aviation research programs revolving high-speed flight during the 1950s and 1960s, primarily under the employ of Convair. His "triangle" fighter theory was later realized through the prototype XF-92 and the upcoming F-102 Delta Dagger and F-106 Delta Dart interceptors - all Convair products.

For the P.13A, the war ended before any prototype could be finalized and flown - the DM-1 glider certainly provided much of the needed data for subsequent prototypes. Armament could only be estimated though the P-13A's compact size may have precluded use of cannon, leaving only heavy caliber machine guns as a possible option. However, by this point in the war, all newer German fighter designs were being fitted with cannon in an effort to make short work of Allied bomber formations. To some extent, Lippisch's triangle fighter design was proven sound and undoubtedly well-ahead of its time, leaving the fortunate United States to benefit most from his research.

The P.13B became a somewhat related program development which sought to combine the best qualities of the DM-1 glider and the P.13A project along a new airframe and ramjet configuration. However, this design appeared in paper form only. The P.13B held a more conventional arrangement with a standalone cockpit position fitted to the very front of the fuselage, side-mounted intakes built into the wing leading edges and an all-new delta wing planform taking on a clipped triangle shape. The airframe featured a pair of vertical tail fins unlike the single large dorsal unit of the preceding P.13A. Power was to be served through a single Kronach Lorin Duct ramjet.
Advertisements

(Showcased performance specifications pertain to the base Lippisch P.13A production variant. Compare this aircraft entry against any other in our database or View aircraft by powerplant type)
PROPOSED STANDARD:
2 x 30mm Mk 108 cannons in wing leading edges

General Assessment
Firepower
Performance
Survivability
Versatility
Impact
Values are derrived from a variety of categories related to the design, overall function, and historical influence of this aircraft in aviation history.
Overall Rating
The overall rating takes into account over 60 individual factors related to this aircraft entry.
20
Rating is out of a possible 100 points.
Relative Maximum Speed
Hi: 500mph
Lo: 250mph
This entry's maximum listed speed (404mph). 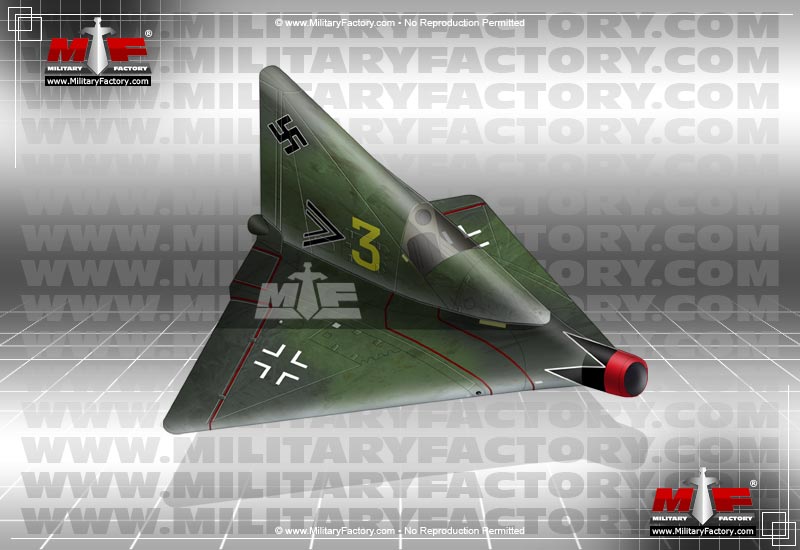 Aviation developments of similar form and function, or related to, the Lippisch P.13A...