The Heinkel He P.1077 rocket-powered interceptor was approved by German authorities but evolved too slowly and never saw a prototype completed before the end of the war. 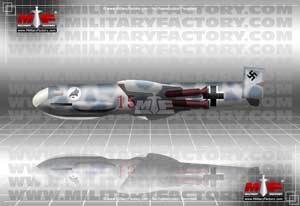 1944 proved a critical year for Germany and its fabled Luftwaffe. Once a master of the skies, advanced products fielded by the Allies in number soon began to remove the German initiative. The Allied reach had expanded to unacceptable lengths, able to target all German-held territories and even German soil itself - no part of the Reich in Europe was safe now. This brought into question the levels of defense for Germany and, in particular, what was being done to counter the threat of American heavy bombers during the day and British heavy bombers during the night. As such, various programs were enacted - primarily through the "Emergency Fighter Program" born on July 3rd, 1944 - to find viable defensive-minded interceptors capable of reacting swiftly to incoming enemy flight groups and engaging bombers with appropriate armament.

Ernst Heinkel headed the Heinkel AG concern which was best known for its He 111 Medium bomber of Battle of Britain fame. The German Air Ministry (RLM) charged any interested German aviation firm with submitting a proposal for an inexpensive single-seat, turbojet-powered interceptor. Four companies responded with varying designs including Heinkel, Messerschmitt, Bachem and Junkers. The Heinkel submission - P.1077 - was selected ahead of the others. However, the Bachem P.20 went on to be evolved into the operational Ba 349A "Natter" ("Viper") along another avenue. Design of the P.1077 originated with Wilhelm Benz and was given the program name of "Julia".

The P.1077 "Julia" was developed along two lines: in one form, the pilot was fitted in a prone position, the intent being to keep the fuselage as slim (and profile small) and aerodynamic as possible under the thrust of rocket power; in the other form, the pilot sat upright in the traditional manner. The former design trend was ultimately selected for further development - engineers convinced of the layout's benefits. To further simplify manufacture, the Julia would not be fitted with a conventional undercarriage - instead it would be launched from guide rails and glide down to land onto provided integral skids under the fuselage. The cockpit would include only the most basic of instrumentation to keep manufacturing/procurement costs down and ease training of potential pilots.

Key to the success of the Julia was its intended powerplant based on rocket propulsion. In question was the Walter HWK 509C series dual-chambered, liquid bi-fuel rocket motor promising a thrust output of 3,750lb. As take-off was required to commence at quickly as possible (in the hopes of intercepting incoming bomber formations in time), the airframe was further outfitted with 4 x Schmidding 533 series booster rockets with 2,650lb thrust each to be used during launch, jettisoned only after their fuel supply had been spent.
Advertisements

When attacking bombers, the Germans learned at an early time that cannon firepower was best over that of machine guns. With that, many German aircraft incorporated some sort of cannon armament into their assault plans including the famous Messerschmitt BF 109 and Focke-Wulf Fw 190 fighters. The Julia system would not disappoint in this quality, to be outfitted with 2 x 30mm MK 108 cannons mounted to either side of the cockpit by way of bulging blisters, the barrels recessed along channels at the fuselage sides. Each cannon would be afforded 60 x 30mm projectiles for multiple passes on a target.

The airframe utilized conventional components and a generally basic configuration. The cockpit was set well-forward in the fuselage which itself was largely tubular in shape. Since the pilot lay prone, the nose cone was the canopy and allowed only minimalistic views of the action ahead. There was no way for the pilot to see to his rear though at the intended speeds, this was acceptable. Wings were high-mounted straight assemblies with turned-down tips. The tail was of a basic Tee configuration with a broad horizontal plane joining a pair of vertical rudders. The rocket motor component was buried within the aft portion of the fuselage and exhausted through a circular port in the rear of the design.

Estimated performance specifications of the P.1077 design included a top speed of 560 miles per hour with a cruise speed nearing 500 miles per hour. Since rocketry allowed for very short flight times, the P.1077 would be limited to a 40 mile combat radius. It could, however, operate at ceilings nearing 49,000 feet which required cockpit pressurization and an accompanying oxygen supply for the pilot. All told, the P.1077 featured a take-off weight of 4,000lb, a wingspan of just 15.5 feet and a running length of 22.5 feet.

Although a promising late-war rocket weapon, the P.1077 did not materialized quickly enough to enter production, let alone having a prototype completed. As such, the P.1077 existed largely as a paper design and ultimately fell to the pages of history as one of Hitler's "Wonder Weapons". Comparatively, the competing Bachem Ba 349 "Natter" rocket-powered interceptor managed to enter limited production for flight testing by war's end in May of 1945.

A proposed related Julia variant known as the He P.1077 "Romeo" was also planned, the type intended to fit a pulse jet engine in place of the Walter HWK rocket motor.
Advertisements

(Showcased performance specifications pertain to the base Heinkel He P.1077 (Julia) production variant. Compare this aircraft entry against any other in our database or View aircraft by powerplant type)
PROPOSED:
2 x 30mm MK 108 cannons in blisters along forward fuselage sides. 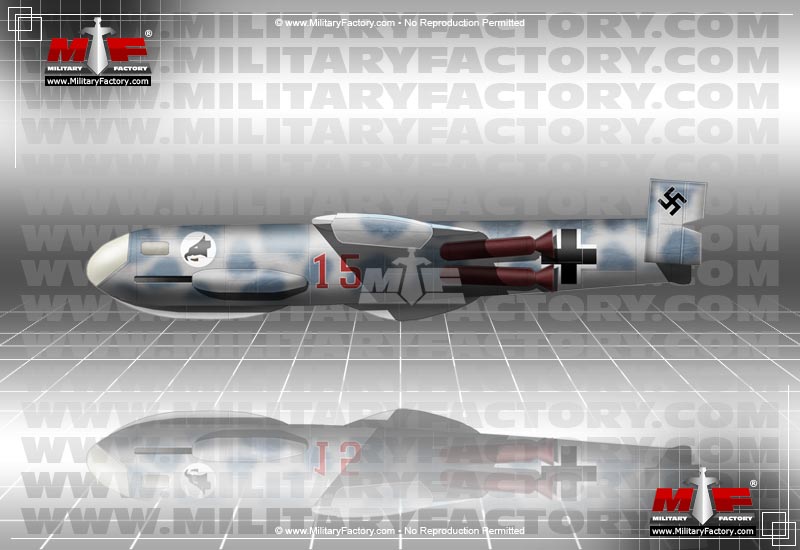