Authored By: Staff Writer | Last Edited: 04/25/2022 | Content ©www.MilitaryFactory.com | The following text is exclusive to this site. 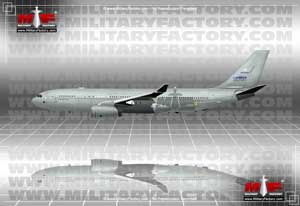 The French Airbus A330 MRTT (MultiRole Tanker Transport) is a modern militarized version of the commercial-minded A330-200 series. The A330 began life as a wide-body airliner company offering with a first flight in November of 1992 and introduction into the market in January of 1994. Since then, nearly 1,000 units have been produced (2013) and the type had proven popular with several major airlines including Delata and Qatar Airways.

The A330 MRTT takes the original design a step further by providing a capable air tanker platform for the world military market. Externally, the design remains largely unchanged and includes the same low-mounted wings, forward set flight deck, conventional unit with single vertical fin and underslung engine nacelles. Internally, however, the majority of the volume is reserved for stores of aviation fuel or cargo space requiring a minimal operating crew of three (fuel systems / cargo manager and two pilots. The type is powered by a variety of engines to suit customer requirements - the British Rolls-Royce Trent 772B series, the American General Electric CF6-80E1A4 and the American Pratt & Whitney PW 4168A series turbofan engines, rated at 72,000lbs thrust output. Performance figures include a maximum speed of 550 miles per hour, cruising speed of 535 miles per hour, a range out to 9,200 miles and service ceiling of 41,500 feet. First flight of a prototype MRTT occurred on June 15th, 2007 with introduction into service on June 1st, 2011. Production began in 2007.

Airbus designed the MRTT as a multirole platform which allows for its conversion to a standard theater transport hauling pallets and containers or, when equipped as such, seating for some 380 passengers. In its fuel tanker guise, the product can be equipped to suit operator taste with dedicated refueling boom, underwing refueling pods and/or Fuselage Refueling Unit (FRU). Fully-loaded, the MRTT can take on 240,000lb of fuel.

At one time a variant of the A330 MRTT was known as the "KC-45A" (under the EADS and Northrop Grumman joint brand label) during its failed bid to become the next tanker for the United States Air Force.

March 2014 - It was announced that the Qata had selected a pair of A330 MRTT aircraft for its Air Force joining existing operators in Australia, Saudi Arabia; Singapore, the United Arab Emirates and the United Kingdom.

May 2015 - It was announced that a joint purchase request for A330 tanker-transports had been submitted by the governments of Netherlands, Norway, and Poland - no doubt driven by Russian interference in the Ukraine Crisis.

July 2015 - It was announced that South Korea has elected to purchase four Airbus A330 MRTT aircraft (over the in-development, competing Boeing KC-46A model. Deliveries are expected to be completed in 2019.

October 2015 - A version of the MRTT based on the latest form of the Airbus A330 is in the works as the A330 MRTT "Enhanced". Updated avionics, mission equipment, and minor structural refinements will be part of the upgrade program.

December 2015 - The British Royal Air Force is set to configure one of its MRTT aircraft for the VIP transport role.

July 2016 - Netherlands and Luxembourg have placed orders for a pair of A330 MRTT aircraft.

August 2016 - India, originally scheduled to take on six Airbus A330 MRTT aircraft, has distanced itself from the deal.

September 2017 - A second A330 MRTT, modified for service with the French Air Force, recorded its first-flight on September 7th, 2017. The branch is expected to take on a fleet of nine A330 tanker-transports under the name of "Phenix". It is slated to enter formal service in 2018.

October 2017 - Germany and Norway has placed orders for five A330 MRTT aircraft.

August 2018 - The Royal Australian Air Force has announced that its KC-30A fleet has delivered upwards of 100 million pounds of fuel to its various aircraft throughout the service's ongoing campaigns.

August 2018 - Singapore has taken delivery of its first A330 MRTT aerial tanker.

November 2018 - The first A330 MRTT aircraft has arrived in Busan, South Korea.

December 2018 - The Airbus A330MRTT is in contention to become India's choice for its "next-generation tanker" requirement. six are being sought and the field includes the Boeing KC-46A Pegasus.

February 2020 - Airbus and Singapore are jointly developing autonomous refueling capabilities for the A330 MRTT under the "Smart Multi-Role Tanker" initiative.

June 2020 - The initial A330 MRTT making up the Multinational Multirole Tanker Transport Unit (MMU) has arrived in The Netherlands.

August 2020 - The NATO air fleet has received its second A330 MRTT aircraft.

September 2020 - The MMU fleet will be adding a ninth example according to reports.

October 2020 - The French Air Force has begun retiring its fleet of KC-135 Stratotankers as it grows its commitment to the A330 "Phenix" MRTT.

October 2020 - Airbus will be developing an upgrade to Australian A330 MRTT tanker aircraft. The current RAAF fleet numbers seven.

December 2020 - Spain will be converting ex-Iberia A330-200 passenger airliners to the MRTT aerial tanker role.

April 2021 - Canada has qualified the Airbus A330 MRTT to officially bid on the RCAF tanker fleet requirement.

February 2022 - Thales has been tapped to install SATCOM on French Air Force A330 MRTT aircraft.

April 2022 - Brazil has announced procurement of a pair of A330 airframes for conversion to the MRTT standard.

(Showcased performance specifications pertain to the base Airbus A330 MRTT production variant. Compare this aircraft entry against any other in our database or View aircraft by powerplant type)
None. 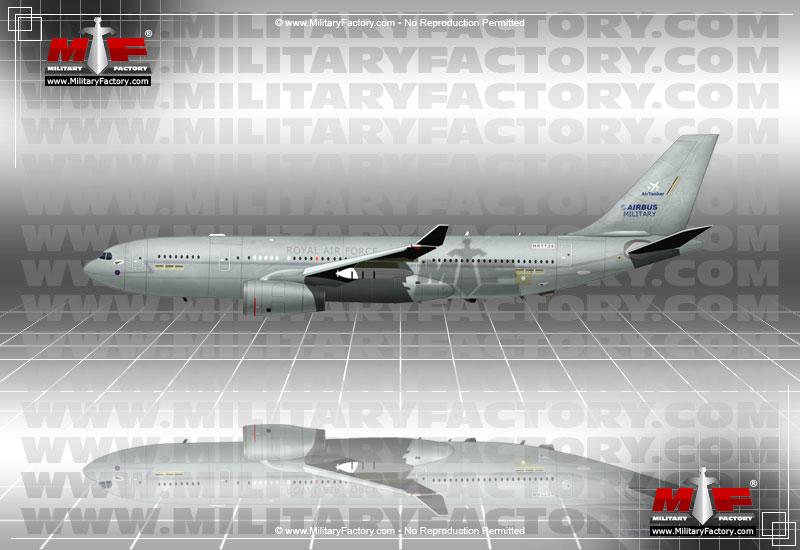