The explosive - literally and figuratively - Messerschmitt Me 163 Komet was the first operational combat aircraft design to incorporate swept wings.

Authored By: Staff Writer | Last Edited: 02/10/2020 | Content ©www.MilitaryFactory.com | The following text is exclusive to this site. 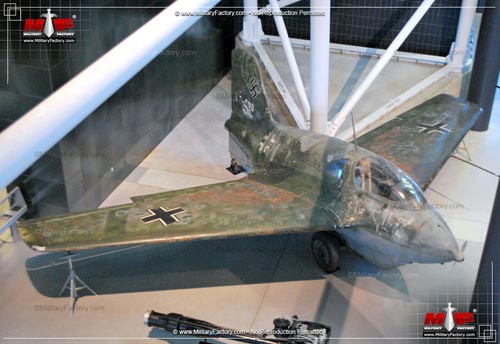 The German Messerschmitt Me 163 "Komet" was perhaps the most unique frontline, operational-level fighter design of World War 2. German engineers, seemingly always on the cutting edge of evolving war technology, developed the rocket-powered aircraft based on early testing completed with an engine-less glider. The resulting research produced the single-seat, swept-wing fighter that was equally dangerous to both enemy bomber crews and the Me 163 pilot alike. The Me 163 first flew on September 1st, 1941 and was formally introduced in the Luftwaffe inventory in 1944. Despite its impressive performance statistics, the Me 163 was something of a tactical failure and more or less a technological dead end with the rise of jet-powered flight soon to come. The idea of fast interceptors also soon gave way to ground-based homing/guided missile technologies.

The Me 163 was born from the mind of Dr. Alexander Lippisch who pioneered a great deal of data research of tailless glider designs dating back to the 1920s prior to joining the Messerschmitt concern in 1939. Work began on such a tailless design through the DFS 194 glider outfitted with a Walter rocket motor. The motor relied on a volatile, though potent combination, known as "C-Stoff" and "T-Stoff". The new Messerschmitt design would utilize the chemical explosion to power the small fighter at break-neck speeds - able to outfly any bomber formation escort fighters with ease. More importantly, the design could be aloft in seconds in response to incoming waves of Allied bombers appearing through both day and night campaigns, wreaking havoc on German industry and supply lines. By 1944, the German initiative that was once held early in the war was all but lost and it began to fight more a defensive war for its very survival.

Testing occurred at the covert Peenemunde facility in June of 1940 to help prove the concept sound. Despite the motor failing to impress due to reliability issues, the airframe itself handled well in the hands of test pilot Heini Dittmar. Serial production of several prototype forms was ordered under the "Me 163" designation in the early part of 1941. At least five "V" based prototypes emerged beginning with V1. Some eight preproduction forms then followed in the Me 163 "A-0" format. Early prototypes managed to reach an impressive 340 miles per hour in recorded test flights.

The diminutive Me 163 was piloted by a single crewman housed under a wide clear canopy. The design was given the then-revolutionary concept of swept-back wings mounted along each fuselage side. The fuselage was a stout, portly design intended to house the cockpit and necessary fuel stores. The empennage was capped by a simple vertical tail fin lacking any horizontal planes. Take-off for the Me 163 was achieved by way of a wheeled, unsprung "dolly" assembly with the rocket motor at full thrust. The dolly was then jettisoned immediately after take-off for it proved an unnecessary counter-aerodynamic element. The interceptor then climbed to the required attack altitude to meet the incoming enemy bomber formation, most likely expending all of its fuel supply by this time. From its lofty perch, the accepted tactic for the Me 163 became a high-speed swoop down into the bomber formation, engaging targets with cannon for as long as momentum allowed - usually two or three dives though each swipe at the target was managed through a quick three-second-or-less window of opportunity. Once spent of both fuel and ammunition, the Komet was then glided to the ground under basic physics, landing on a relatively smooth patch of earth atop the provided spring-loaded centerline skid.
Advertisements

The Me 163B design then emerged in December of 1941 as a simplified production-quality form intended for wartime mass production and outfitted with an improved form of rocket motor. Two V prototypes were generated and these were followed by at least thirty pre-production series aircraft. Initial models were designated as "Me 163 B-0" and fitted with 2 x 20mm MG 151/20 series cannons. These were followed by the Me 163 B-1 marks which incorporated 2 x 30mm Rheinmetall Borsig Mk 108 series cannons. The B-1 mark was powered by a Walter HWK 109-509A-2 liquid-fueled rocket motor providing 3,800lbs of continuous thrust. Its maximum speed was 596 miles per hour with a range of just 25 miles and service ceiling of 39,700 feet. The Me 163 B-1 held an amazing 31,500 feet-per-minute rate-of-climb.

In theory, the idea of a small, one-man interceptor tearing holes in unsuspecting bomber formations was a sound one as defending Allied escort fighter aircraft could only hope to catch the Me 163, a target reaching speeds of nearly 600 miles per hour. However, the reality of the design provided an array of dangers for the pilot. The fuel mixture itself was known to self-combust as both elements were highly volatile, proven by the fact that such an event killed a test pilot - the aircraft had the possibility of exploding in the air or on the ground. The airframe could also become highly uncontrollable at the provided extreme speeds for swept wings were still an infant concept concerning high-speed flight. Powered flight was essentially limited to just 7.5 minutes through the available fuel stores and the freefall glide to the ground during landing placed the pilot and his aircraft in a precariously vulnerable position when Allied fighters were about. Unpowered landings also held its own share of inherent dangers as only a single attempt was essentially allowed. The operational range of the Me 163 also proved extremely limited and restricted the German response. Additionally, the armament array of 2 x cannons (mounted in the wing roots) was afforded up to 60 rounds of ammunition per weapon installation.

Initial combat sorties in July of 1944 attempted to showcase the Me 163 as a true fighter breed, able to fly twice as fast as any available Allied fighter type. However, it was found that the aircraft approached a flight of Boeing B-17 Flying Fortresses much too fast, thus not allowing the Me 163 pilots a chance to properly aim their guns and engage, consequently overshooting the targets and claiming no kills. It was only then discovered that the Me 163 could be used more effectively by conducting the aforementioned steep climb upon takeoff, achieving the desired attack altitude until the rocket motor fuel was expended and diving down to engage under control - relying on gravity and drag in the process.

Me 163 interceptors were credited with destroying just nine enemy aircraft (some sources state as many as sixteen kills) during the latter part of the war, this against the 370 Me 163s produced. Another Axis member nation, the Empire of Japan, also tried (somewhat successfully) to copy the Me 163 design. However, one of two submarines transferring the Me 163 design and associated plans from German hands to Japan was sunk by the Allies. The Japanese did manage to develop their own working variant of the Me 163 (as the Mitsubishi J8M "Shusui") with the surviving set of plans but the aircraft never went into operational service.

For the Germans, the base Me 163 design was also planned to be reworked into a two-seat trainer form known as the "Me 163S", these born from the streamlined Me 163B production model.

Despite their impressive performance, the Me 163 fell victim to enemy guns nine times itself and a further fourteen units were registered as "lost" during the war. Allied fighter pilots began to understand the limitations of the rocket-powered fighter and simply adjusted strategy to wait for the aircraft to begin its final descent - an action the Me 163 pilot had no chance to abort. In another stroke of good luck for the Allies, the required fuel for Me 163 aircraft was in short supply throughout the end of the war, keeping many of the available Me 163 fighters grounded for the long-term. By the end of the war, the focus had also begun to shift to more advanced and conventionally-minded jet-powered aircraft such as Messerschmitt's own Me 262 "Schwalbe" fighter-bomber.

Post-war, many available Me 163 airframes were recovered and studied extensively by the Allies, no doubt influencing the many strange projects seen in the post-war years, particularly in America. Many others ended up as museum show pieces.
Advertisements

(Showcased performance specifications pertain to the Messerschmitt Me163 B01a Komet (Comet) production variant. Compare this aircraft entry against any other in our database or View aircraft by powerplant type)
STANDARD:
2 x 20mm MG151/20 automatic cannons OR 2 x 30mm MK 108 automatic cannons in wing roots (one gun per wing root). 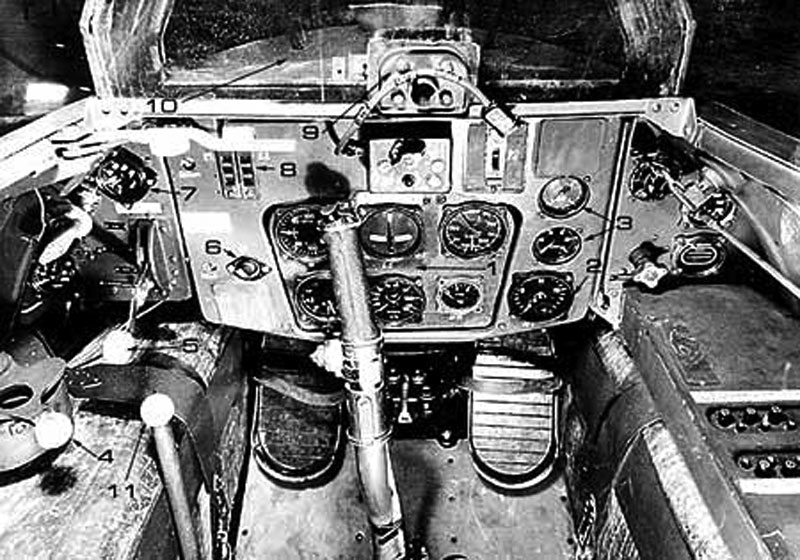 General Assessment
Firepower
Performance
Survivability
Versatility
Impact
Values are derrived from a variety of categories related to the design, overall function, and historical influence of this aircraft in aviation history.
Overall Rating
The overall rating takes into account over 60 individual factors related to this aircraft entry.
56
Rating is out of a possible 100 points.
Relative Maximum Speed
Hi: 750mph
Lo: 375mph
This entry's maximum listed speed (659mph). 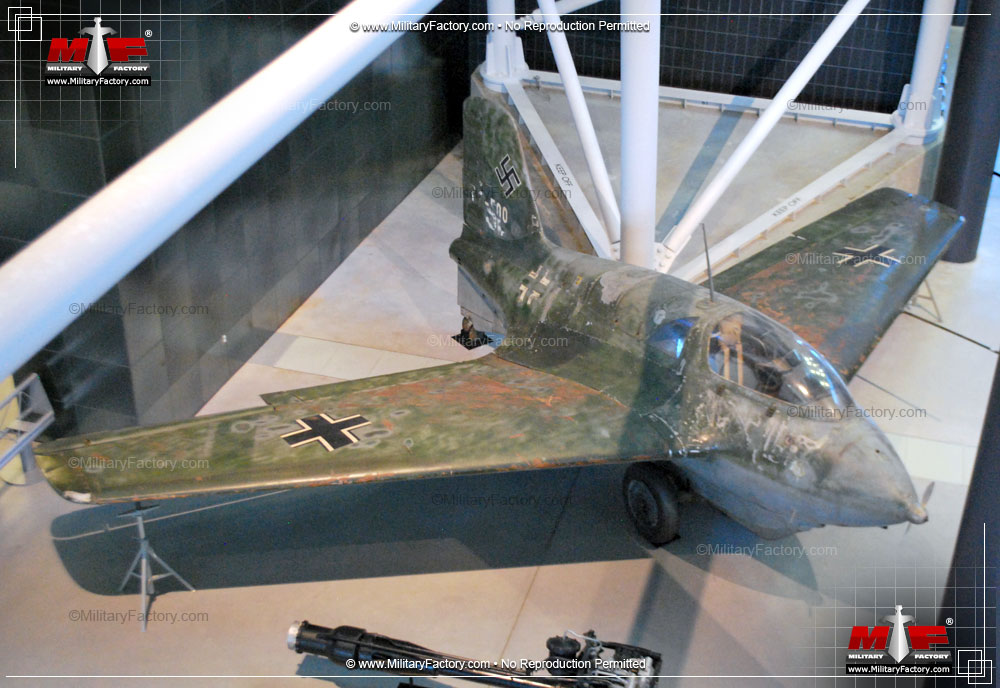 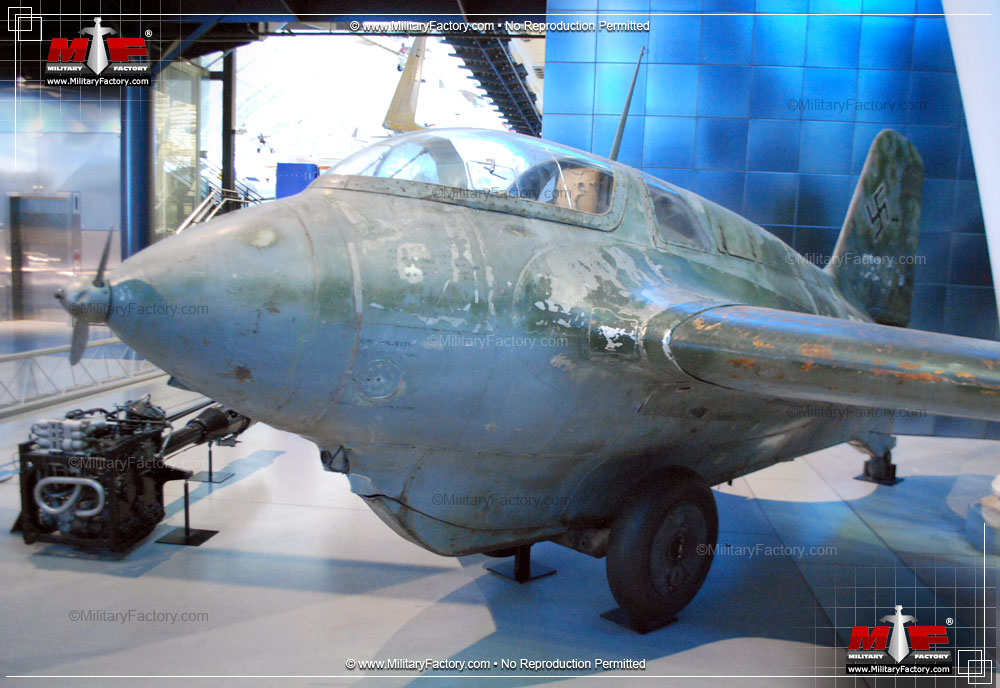 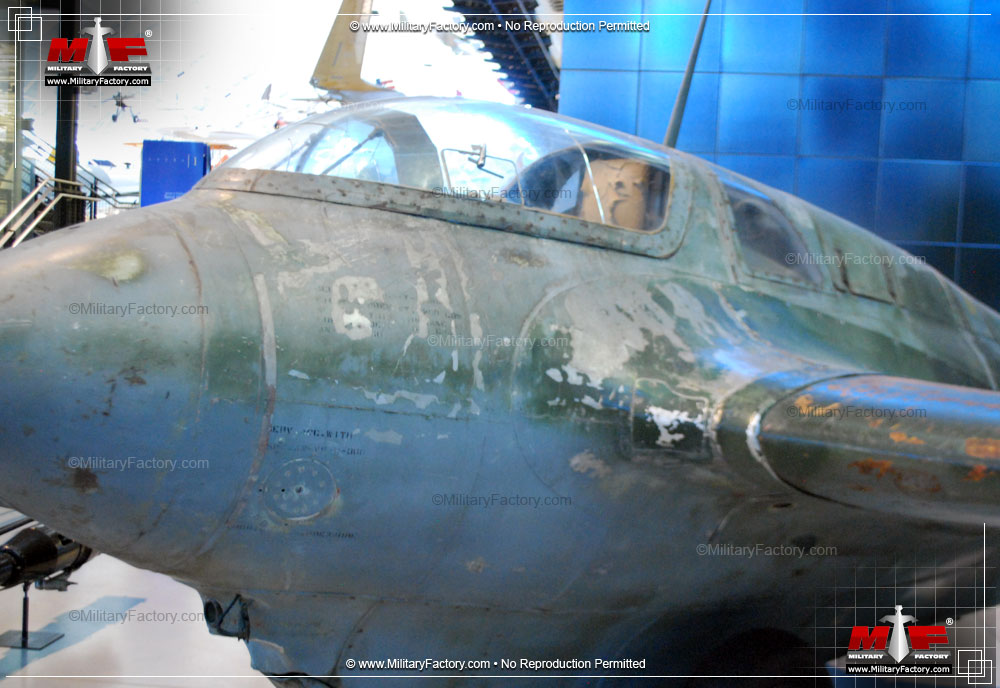 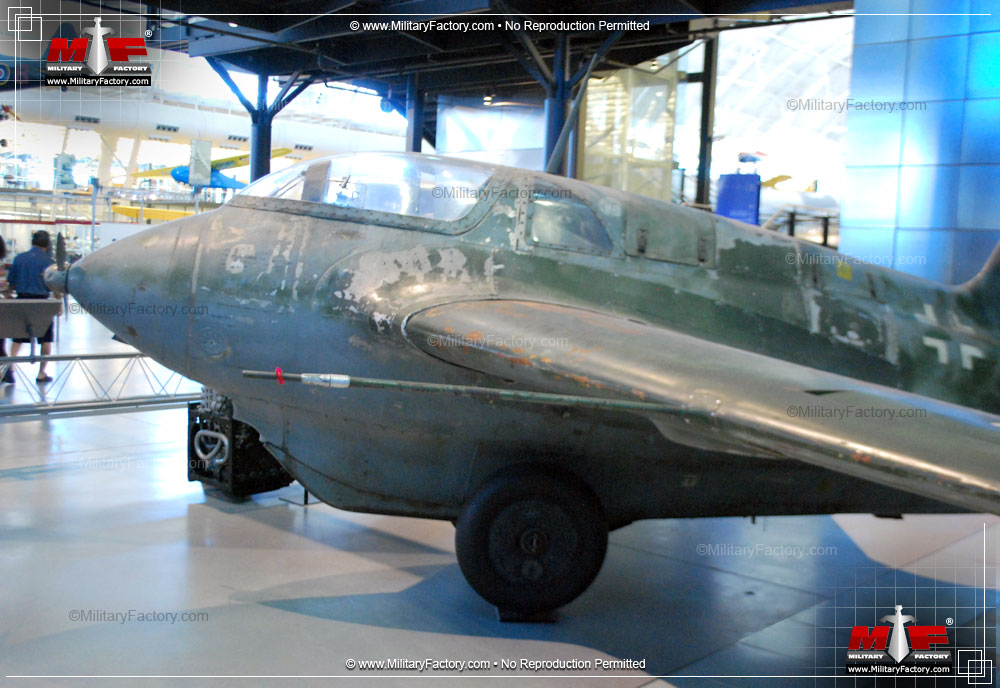 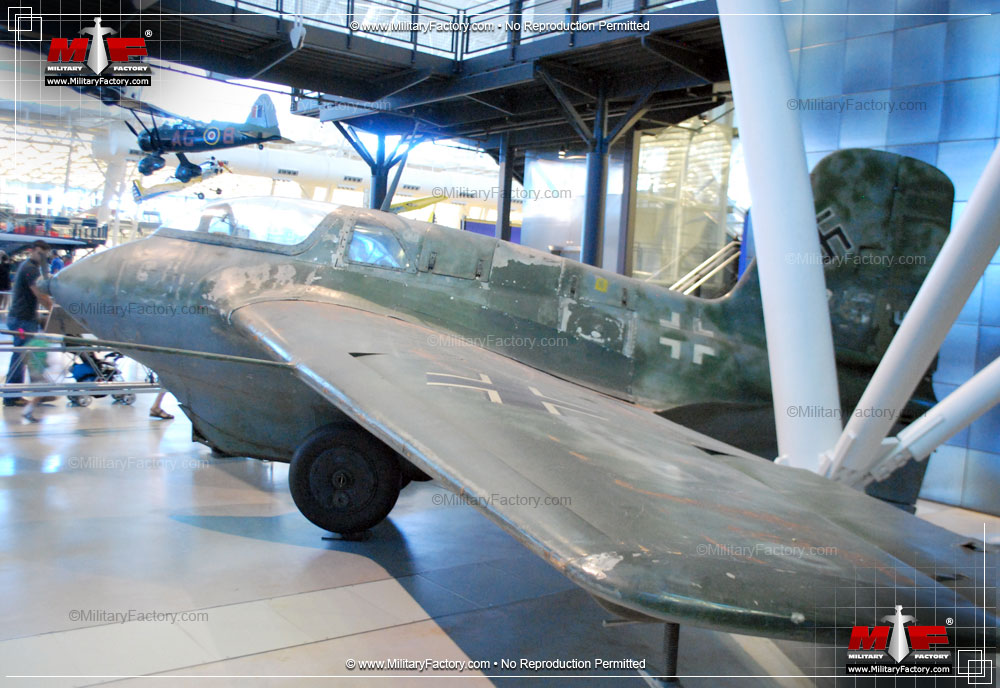 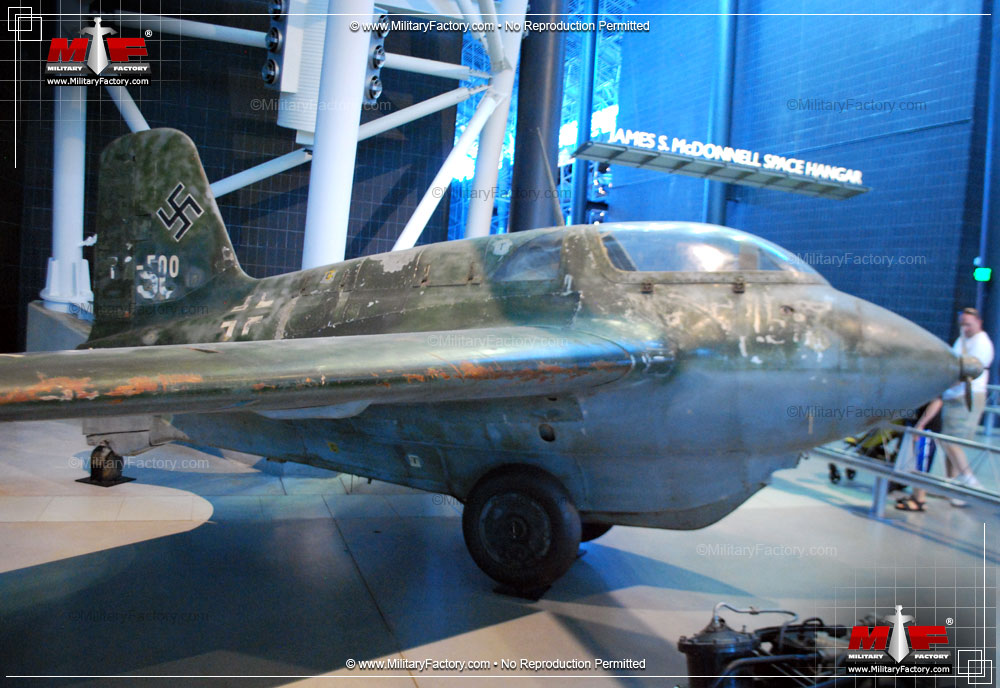 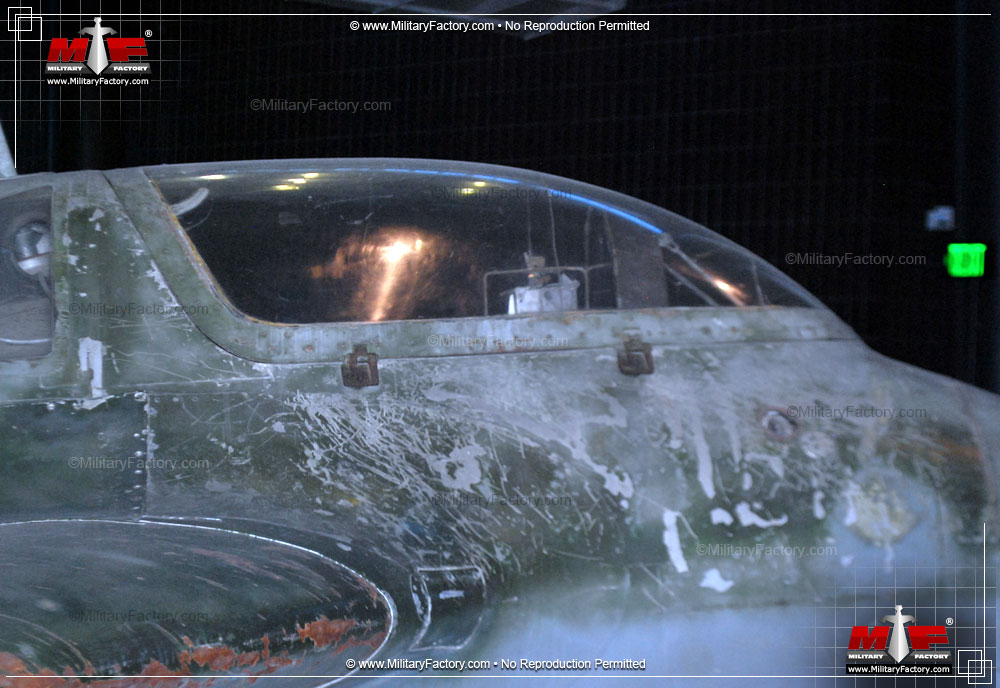 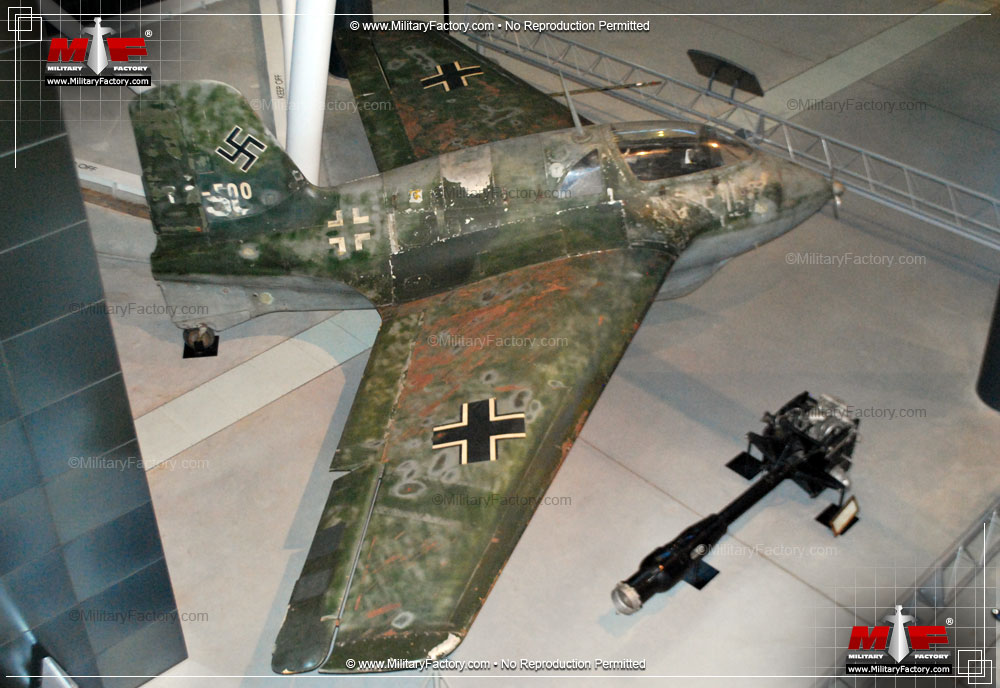 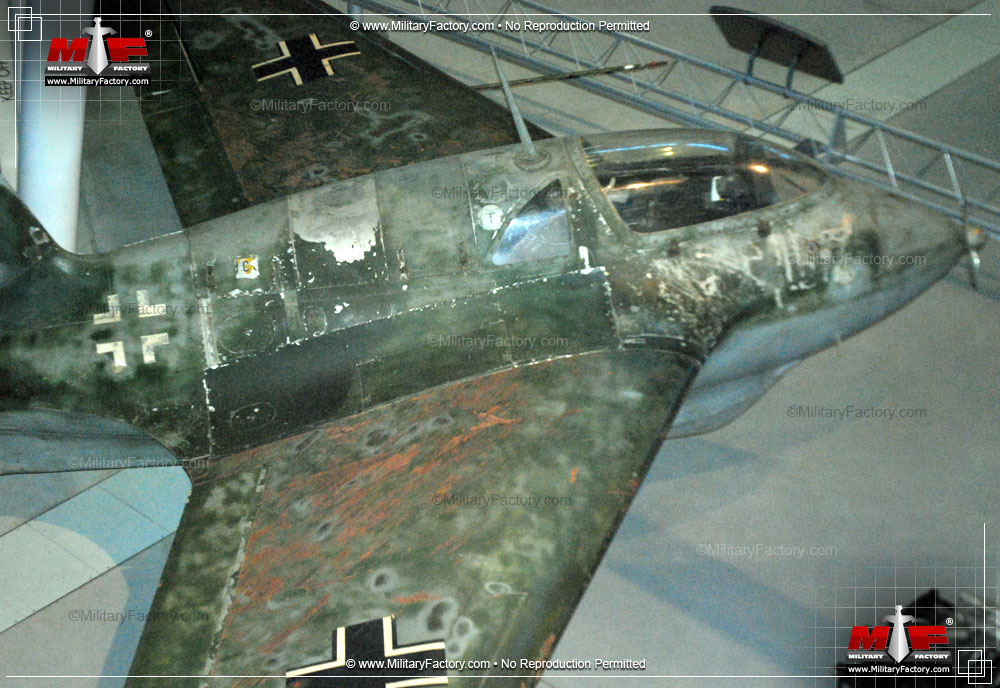 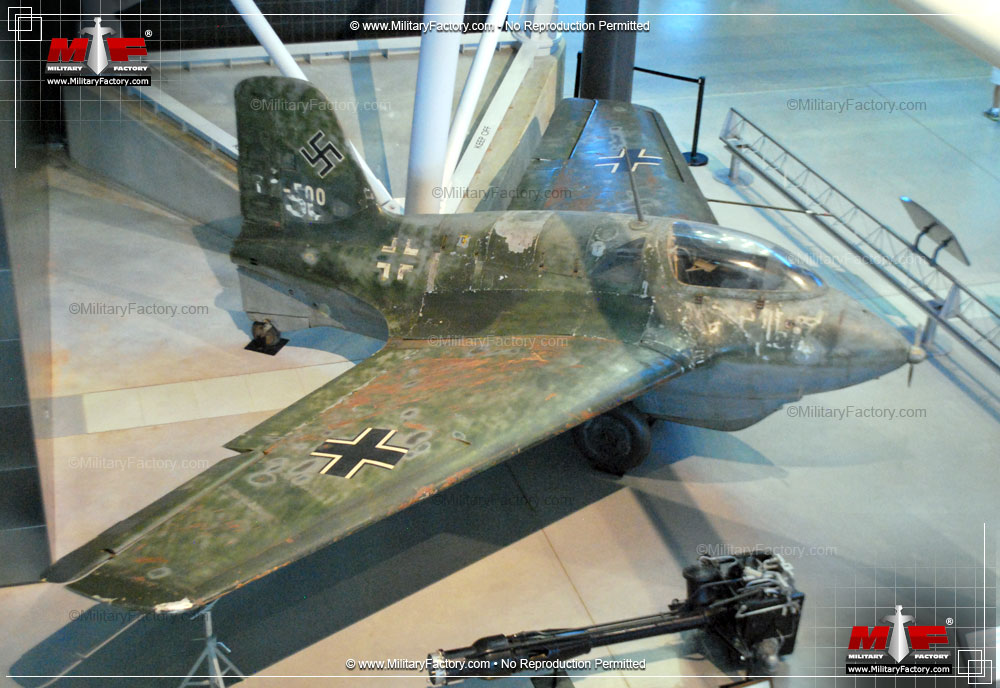 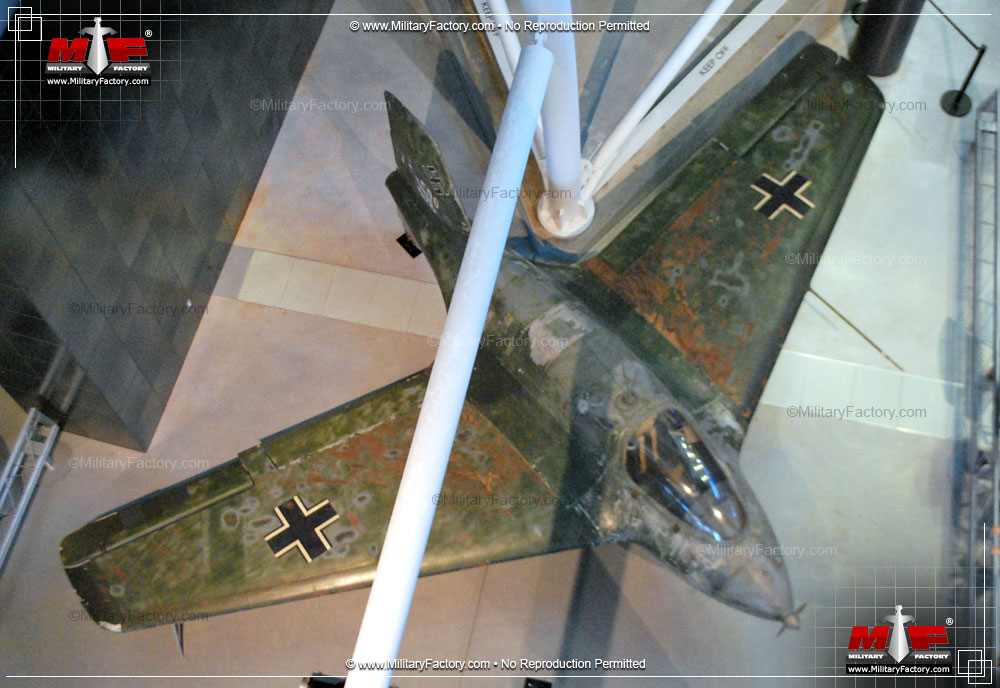 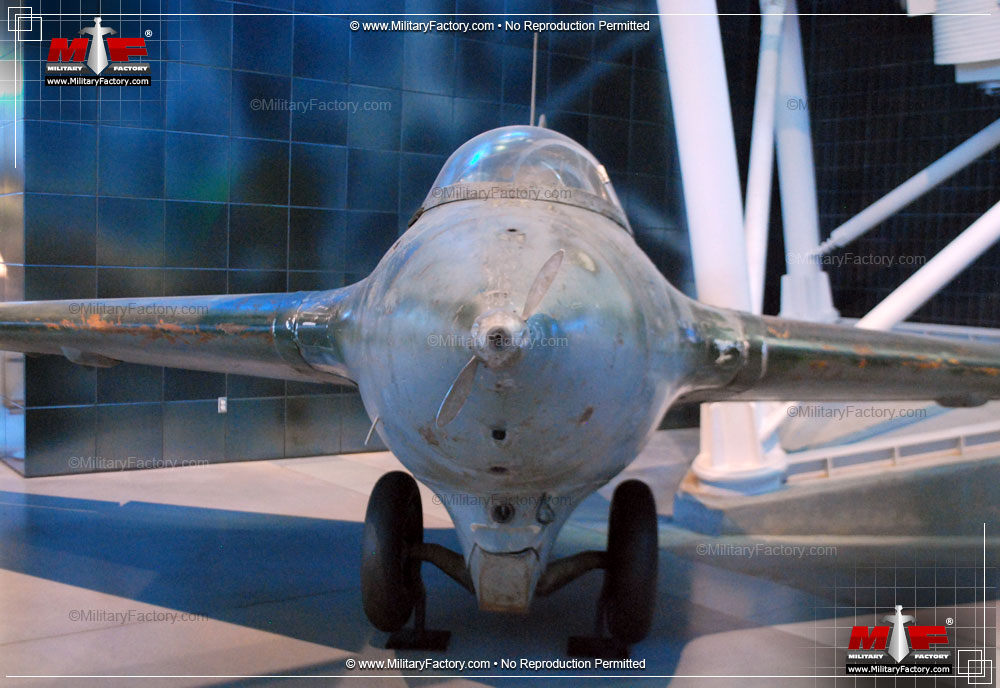 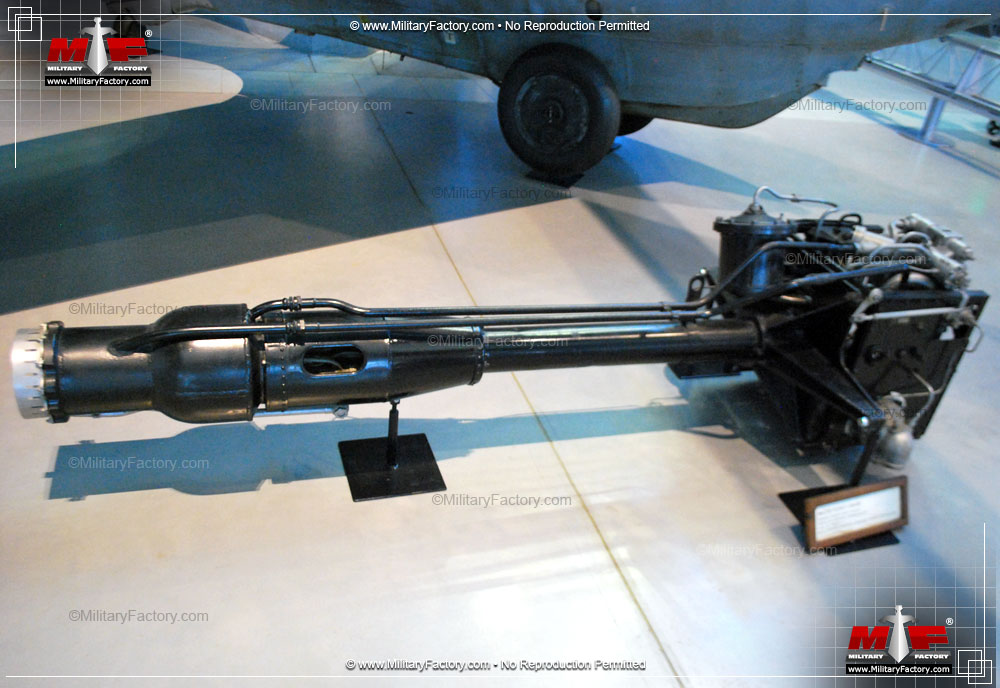 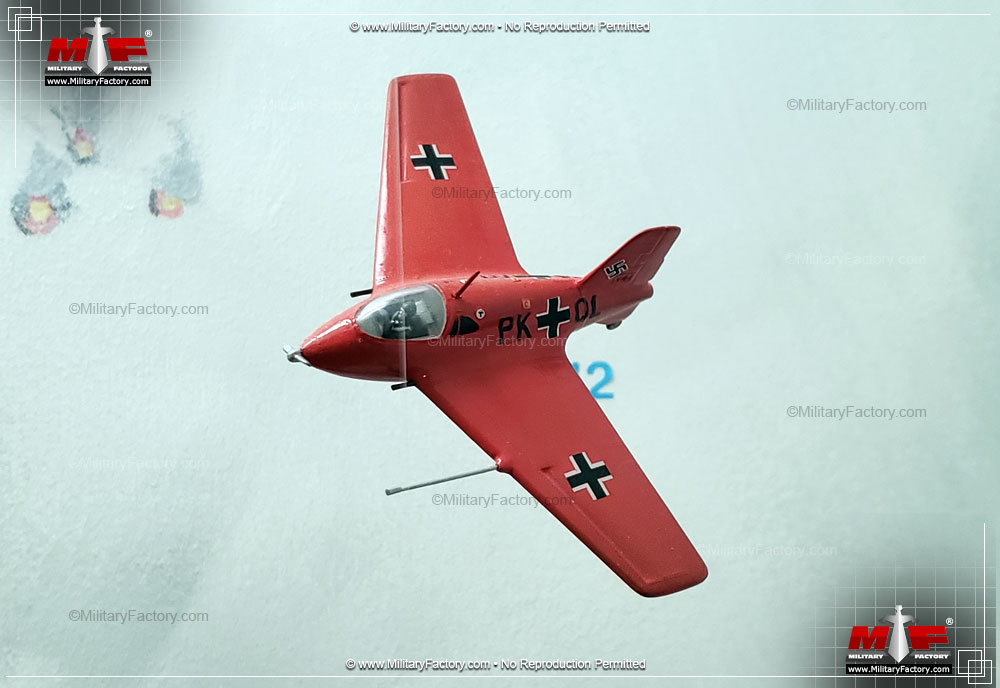 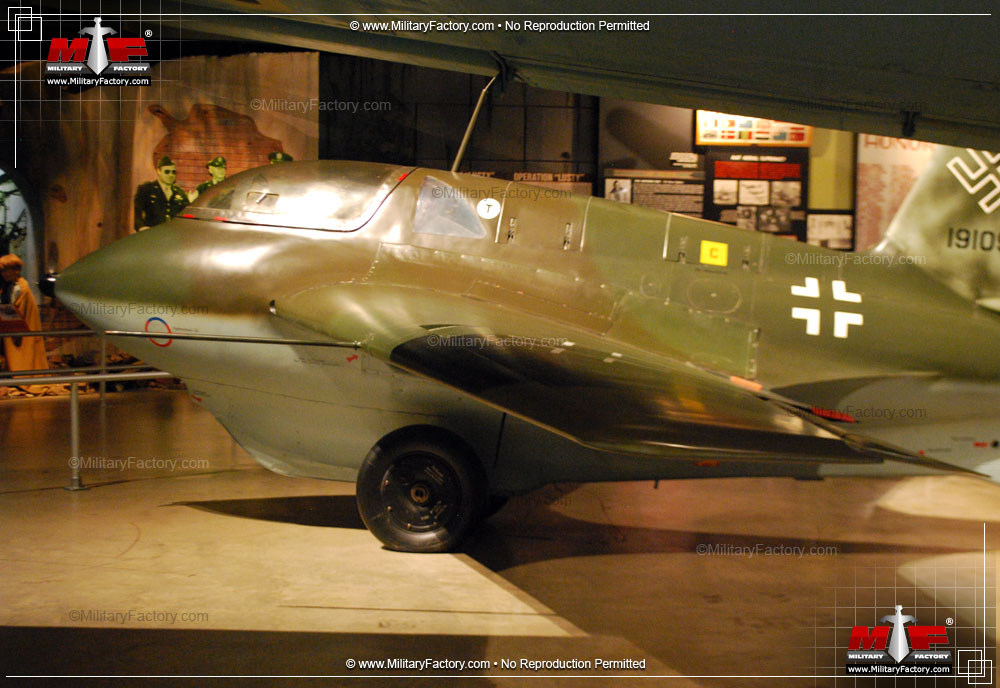