387 production examples of the BAe 146 mark it as the most successful British-designed, jet-powered, civilian market airliner.

Authored By: Staff Writer | Last Edited: 02/02/2022 | Content ©www.MilitaryFactory.com | The following text is exclusive to this site. 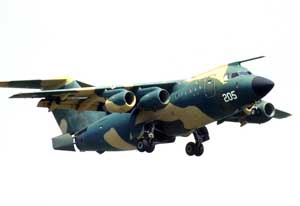 Introduced in 1983 by British Aerospace (BAe), the BAe 146 has served for several decades as a civilian and military airliner/VIP/freight transport. Production has totaled 387 across several notable variants which have gone on prove the product the most successful British-originated, civilian-minded, jet-powered airliner program. The aircraft remains in service into 2014 as many world airliners still operate the type due to its inherent capabilities and "quiet" operation as jet aircraft go.

Origins of the BAe 146 lay in an August 1973 initiative by then-Hawker Siddeley Aviation. The product was a company venture to produce a low-noise, jet-powered, short-haul airliner. The design emerged with a conventional tubular fuselage with forward-set cockpit, shoulder-mounted wings fitting two engines apiece and a "T-style" tail unit. The product was given the designation of "HS.146" and, despite a global economic downturn, continued development under limited conditions. When the storm had cleared, the HS.146 remerged as a viable market produce to fill the short-haul need. However, in 1977, Hawker Siddeley was out of the aircraft business and eventually went wholly defunct in 1992, leaving the HS.146 now the produce of British Aerospace who redesignated it as the "BAe 146". The BAe 146 achieved its first flight in prototype form on September 3rd, 1981 and achieved the requisite certification in 1983. Formal deliveries to awaiting customers began in May of that year.

The BAe 146 line stretched across included three major production models, each based on passenger seating which directly dictated fuselage lengths. The base model was the "146-100" which seated 94 and this was then followed by the "146-200" seating between 85 to 100 and the "146-300" seating 100 to 112. Comparatively, the 146-200 design showcased a running length of 94 feet compared to the 86 feet of the original 146-100 offering. In all models, the operating aircrew remained two and power was served through 4 x Textron Lycoming ALF 502R-3 or -5 series turbofan engines delivering nearly 7,000lbs of thrust each. Cruising speeds reached 500 miles per hour with a listed range out to 1,800 miles.

The type's "quiet" operation soon saw her marketed as a low-noise freight through the BAe 146QT designation (QT = "Quiet Trader"). A modular variant was born as the BAe 146QC (QC = "Quick Change") which allowed operators to actively transform the internal configuration to serve as passenger airliner or freighter as required. The 146QT then influenced the promising - though ultimately abandoned - military-minded transport in the BAe 146STA ("Small Tactical Airlifter"). The 146STA was a revised design with a rear-fuselage cargo door and in-flight refueling probe. The type could have served in hauling cargo loads or in dispensing airborne infantry. Only one flying prototype of this mark was ever completed and no orders followed.©MilitaryFactory.com
Advertisements

Into the 1990s, the BAe 146 paved the way for equivalent designs put forth under the Avro product banner as the "Avro RJ". The series included the three BAe 146 models which were designated as RJ70, RJ85 and RJ100 respectively and sported various improvements. The upcoming Avro RJX was to feature higher-efficiency Honeywell AS977 turbofans though - while a prototype eventually flew - the project was canceled in 2001 with three prototypes completed (each representing the three expected production forms). The RJ115 was offered by Avro as a modified RJ100 though with a revised door plan and an increased Maximum Take-Off Weight (MTOW). Again, none were produced.

Civilian operators of the BAe 146 have proven many while military operators have remained rather reserved. In the civilian market the aircraft has been taken on by the likes of Australia, Belgium, Brazil, Canada, Chile, China, Germany, Indonesia, Libya, Mexico, Philippines, Taiwan, South Africa, the United Kingdom and the United States (among others). Military customers have included Austria, Bahrain, Bolivia, Mali, the UAE and the United Kingdom.

British RAF BAe 146s have served as VIP transport in the "Queen's Flight", originally leased and trialed as the CC.1. A pair (BAe 146-200) then were taken into formal service, replacing the outgoing 1950s-era Hawker Siddeley Andover in the role, under the designation of CC.2 designation. The aircraft were delivered in 1986 and joined by a third in 1990. A pair of RAF BAe 146-200QC models were also modified with a countermeasures system for active use over the Afghanistan warzone. The RAF also operates the BAe 146M as a bridge between its outgoing fleet of Lockheed C-130 "Hercules" transports and the incoming stock of Airbus Military A400M "Atlas" airlifter.©MilitaryFactory.com
Note: The above text is EXCLUSIVE to the site www.MilitaryFactory.com. It is the product of many hours of research and work made possible with the help of contributors, veterans, insiders, and topic specialists. If you happen upon this text anywhere else on the internet or in print, please let us know at MilitaryFactory AT gmail DOT com so that we may take appropriate action against the offender / offending site and continue to protect this original work.

November 2021 - Wright Partners / Wright Electric are looking into an all-electric version of the BAe 146 airliner. 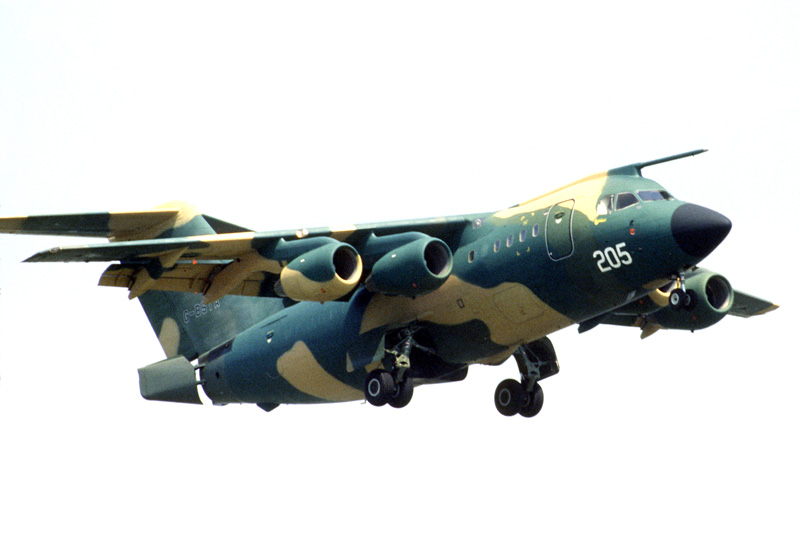 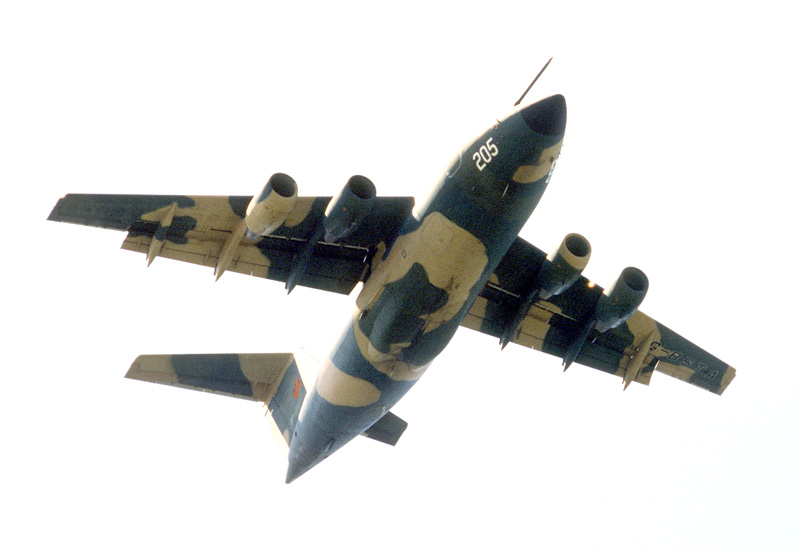 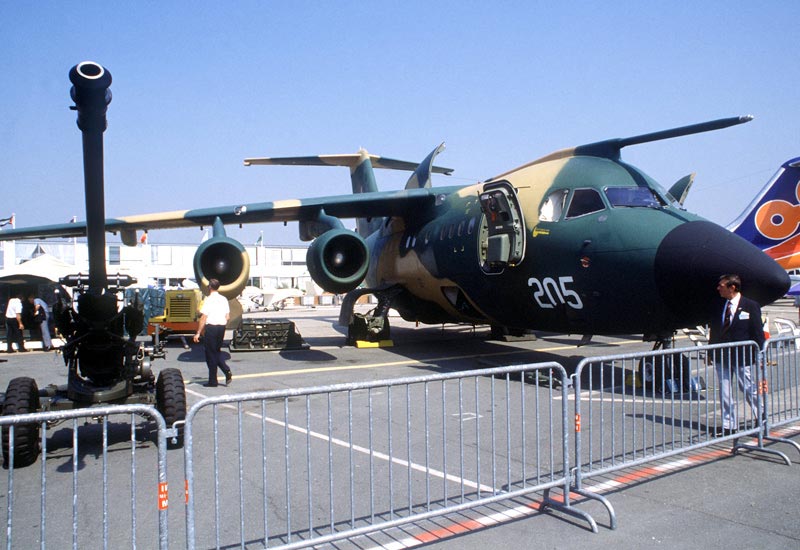 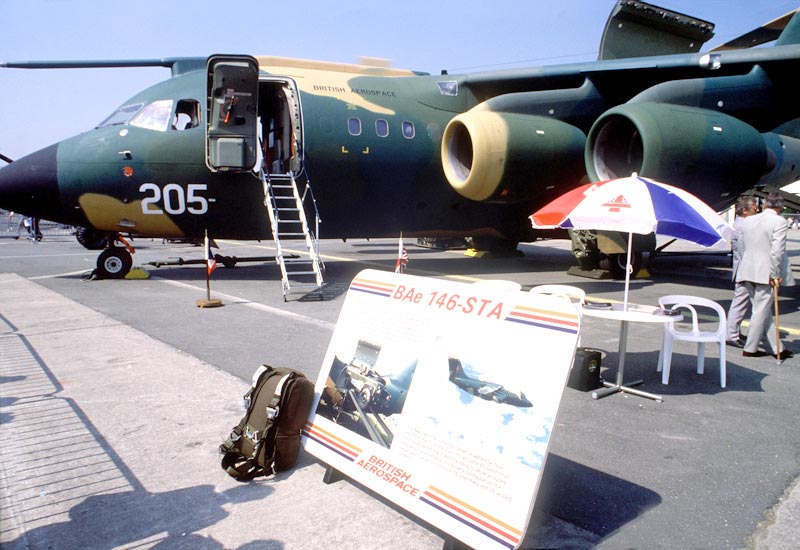