The Polish-produced PZL W-3 Sokol has been in service since 1985.

Authored By: Staff Writer | Last Edited: 12/21/2020 | Content ©www.MilitaryFactory.com | The following text is exclusive to this site. 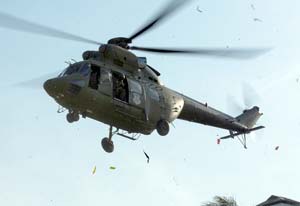 PZL-Swidnik (now part of Italy's Leonardo-Finmeccanica by way of AgustaWestland) - established in 1951 - is the largest helicopter-maker in the nation of Poland. One of its most successful commercial products is the medium-lift PZL W-3 "Sokol" ("Falcon"), a multi-role-minded rotary-wing platform which continues to serve many global operators ranging from Algeria and Chile to Spain and Uganda. The product is something of a national success story for Poland as it became the first completely indigenous helicopter (designed and developed in-house) to emerge from the former Soviet-aligned country. However, production totals have been rather modest when compared to other more high-profile helicopters of same role, reaching only some 150 units to date (2018) with manufacture spanning from 1986 to the present.

Design work began in 1973 as a local initiative to satisfy both military and civilian markets, primarily those in the Soviet sphere of influence. For the rigors of both industries, a twin-engine design was selected which aided reliability and survivability as well as met the medium-lift requirement. The overall configuration of the helicopter was largely conventional with the engines installed over the passenger cabin roof. A four-bladed main rotor was used for lift and this coupled with a three-bladed tail rotor (facing starboard) for stability. The undercarriage was wheeled for ground-running but fixed in place during flight. The pilots took up positions overlooking the short nose section in the usual way with the cockpit offering commanding views of the action around the helicopter's frontal section.

A first-flight was recorded on November 16th, 1979, delayed by a very long development phase which presented its set of challenges, launching what would become a storied service career. This then spurred low-rate production beginning in 1985 (while there still was a Soviet Union).

The W-3 Sokol fed the civilian market through several designs: W-3 was used to mark the base multi-purpose, utility-minded platforms of which thirty units followed to the standard. W-3A were FAR-29 certified and the E-3AS were W-3 airframes converted to the newer W-3A standard, twenty-two emerging from production. The W-3A2 was given a twin-axis Smith SN350 series autopilot system though only a single example was built. The W-3AM was completed with floats for on-water landings and thirteen were delivered to the standard. The W-3 "Erka" was proposed for the air-ambulance role but only a single example was realized.

The Sokol went on to shine for the military market: Initial, unarmed marks became the W-3, W-3T and W-3P. The W-3P became a VIP passenger transport and the W-3W/W-3WA were armed versions fitting 2 x 23mm GSz-23L series autocannons as well as four weapons hardpoints; thirty-four were built to the standard. The W-3AE was taken on by the Polish Army as a MEDEVAC platform and three were converted from the armed W-3WA mark. Another MEDEVAC form emerged through two examples as the W-3R, these used by the Polish Air Force. The service also had six W-3RL models for the Search and Rescue (SAR) role.©MilitaryFactory.com
Advertisements

The W-3RM and W-3WARM "Anakonda" were navalized W-3 helicopters delivered to the Polish Navy for SAR operations at sea. Eight were procured. The W-3PSOT and W-3PPD "Gipsowka" were used as flying command centers for the Polish Army. Three examples of the W-3RR "Procjon" were built as radio-electronic reconnaissance platforms.

The W-3PL "Gluszec" is the current militarized Sokol helicopter standard. Based in the W-3WA model, it is fully-modernized for the battlefield requirements of the new millennium and features digital avionics, HOCAS ("Hands-On-Collective-And-Stick"), FLIR and Night-Vision (NV) support. Two large-area color Multi-Function Displays (MFDs) dominate the instrument panel ahead of each pilot position and each pilot is afforded HUD (Head-Up Display) showcasing pertinent mission and performance information. A Radar Warning Receiver (RWR) is standard as is IFF. The twin 23mm cannon fitting has been simplified to become a single 12.7mm heavy machine gun weapon operated by the pilot. The design appeared in testing in 1999 and has been taken into service by Polish Land Forces since (through an upgrade program of existing W-3WA production models).

The Sokol series was also proposed in a handful of other over-battlefield forms including anti-ship/anti-submarine (W-3U-1 "Alligator"), gunship and 14-passenger transport (W-3 "Sokol-Long") models but none came to fruition.

The W-3WB "Huzar" was a proposed armed variant of note and based in the W-3W model series. Denel of South Africa supplied the avionics and weapons fit from the Rooivalk attack helicopter. This product failed to materialize beyond a demonstrator form and instead shifted to Israeli IAI avionic and weapon suites, becoming the W-3H. The Polish Air Force was interested in procuring about 100 of these models but the deal was cancelled in 1998.

The W-3A production model carries 2 x Rzeszow PZL-10B turboshaft engines rated at 900 horsepower each. It sports a maximum speed of 162mph and typically cruises near 150mph. Range is out to 465 miles (775 miles ferry) and its service ceiling is 16,100 feet. Rate-of-climb is 1,830 feet-per-minute.

Internally there is a crew of two seated side-by-side. Depending on seating configuration, as many as twelve passengers can be ferried to-and-fro. For the MEDEVAC role, up to four medical litters can be installed and there remains space for accompanying medical staff. Dimensions of the aircraft include an overall length of 46.7 feet, a width (including rotor diameter) of 51.5 feet and a height of 16.9 feet. Empty weight is 8,500lb against an MTOW of 14,110lb.©MilitaryFactory.com
Note: The above text is EXCLUSIVE to the site www.MilitaryFactory.com. It is the product of many hours of research and work made possible with the help of contributors, veterans, insiders, and topic specialists. If you happen upon this text anywhere else on the internet or in print, please let us know at MilitaryFactory AT gmail DOT com so that we may take appropriate action against the offender / offending site and continue to protect this original work. 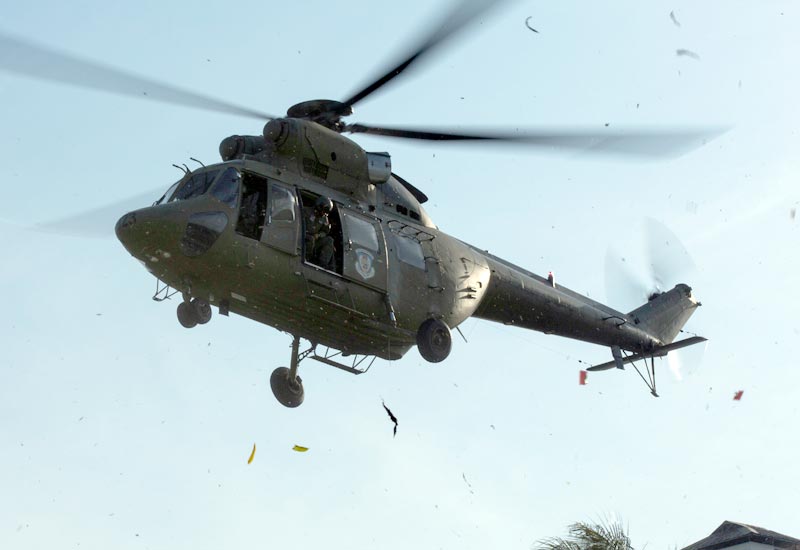 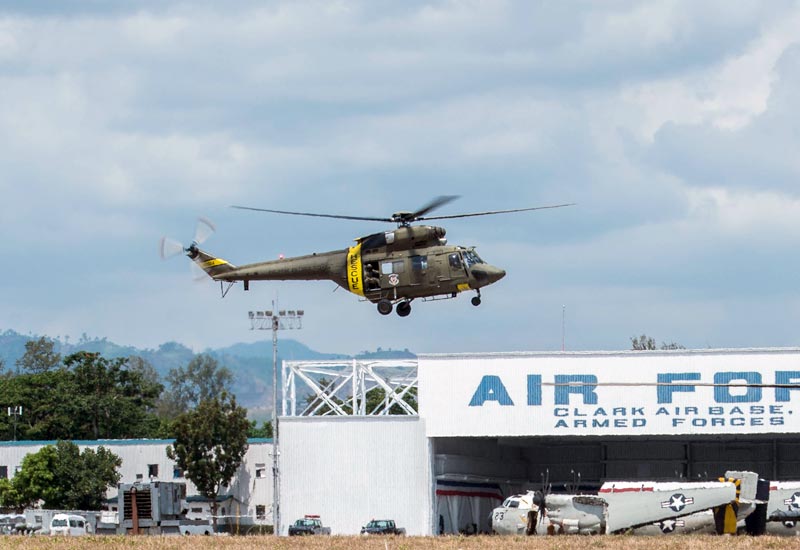