The Mitsubishi A7M Reppu was intended to replace the once-excellent A6M Zero for the Imperial Japanese Navy.

Authored By: Staff Writer | Last Edited: 02/27/2020 | Content ©www.MilitaryFactory.com | The following text is exclusive to this site.

Japanese engineers developed many fine fighter designs during the height of World War 2 including the famous "Zero" carrier-born naval fighter - formally known as the Mitsubishi A6M. The type entered service in 1940 and was produced in nearly 11,000 examples, becoming the spearhead of most any airborne naval initiative over Asia and the Pacific thanks to its excellent agility and operational range. However, as American technology and tactics improved, the natural limitations of the A6M began to show through - lack of efficient armor protection of pilot and fuel tanks, limited engine output and limited firepower. The Americans countered with the excellent F6F Hellcat, F4U Corsair, P-38 Lightning, P-51 Mustang and P-47 Thunderbolt in reclaiming the skies over the Pacific Theater - each mount making aces out of many who flew them. American aircraft maintained good armor protection, ample firepower and high-powered engines to see the task through. Couple this with improved aerial tactics and victory for the Allies was in some ways assured over their Japanese foes in time.

As such, though to a successor for the A6M was already being given as early as late-1940 (the A6M entered service a short time before in July of 1940). Several key qualities of the limited design would be addressed including firepower, speed and armor protection. Progress was initially slow and development did not reach acceptable speeds until 1942. Formal specifications were handed down by the Imperial Japanese Navy in July for a carrier-based aircraft capable of reaching near-400mph speeds, a service ceiling up to 20,000 feet and a combination cannon/machine gun armament. The task for developing the aircraft was given to Mitsubishi with engine selection between a Mitsubishi development (the Ha-43) or a Nakajima type (the Ha-45, to become the Homare series). The airframe was designed around either fitting as both could provide the needed performance specifications. The resulting prototype - recognized as the A7M1 - was first flown on May 6th 1944. Performance from the installed Nakajima Homare 22 series engine (2,000 horsepower) was lacking but the controls and agility proved sound. Three A7M1 prototypes were eventually built.

While the IJN halted development of the A7M in July, Mitsubishi progressed with their Ha-43 engine of 2,200 horsepower and testing of the completed A7M2 system on October 30, 1944 exceeded all expectations to the point that IJN interest in the aircraft was rekindled. Five total A7M2 prototypes were produced and successful testing allowed the IJN to formally adopt the aircraft into service. It was planned that the A7M could also be fielded from land bases under the A7M3 designation (featuring a supercharged Ha-43 engine) as the Japanese carrier force was largely destroyed and thus limited by this point in the war. One of the prototypes was later lost to an accident.

With serial production granted, lines were retooled for manufacture of the promising fighter. However, a large earthquake in Nagoya disrupted the effort considerably, forcing shutdowns and repairs. The situation was made worse when Allied air superiority had been gained over the Japanese mainland, resulting in a relentless bombing campaign that further shook war-making capabilities and restricted open movement of resources and needed supplies. The principle threat to Japan at this time was the high-flying, four-engined American Boeing B-29 Superfortress capable of out-ranging Japanese defenses. Three more A7M prototypes were lost during American air attacks. Collectively, the strategic bombing campaign and natural disaster doomed the A7M production schedule for Japan officially surrendered on August 15th, 1945, the surrender being recognized on September 2nd. With the end of the war so too came the end of many projects such as the A7M. Thusly, the A6M would never see her successor and the A7M would never experience combat, her remaining airframes and parts being scrapped at war's end.

The A7M was named the "Reppu" by the Japanese, translating to "Strong Gale" while the Allies assigned her the codename of "Sam". In practice, the A7M was comparable in scope, performance and function to the Republic P-47 Thunderbolt, the Vought F4U Corsair and the Grumman F6F Hellcat - Japan's principle fighter foes in the Pacific.

Overall, the A7M shared some visual similarities to the A6M before it. The fuselage was of a long design with the engine set at the front of the design with the cockpit ahead of amidships. The engine was an air-cooled radial type which allowed the requisite horsepower output and performance gains needed in the new carrier fighter while powering a standard three-bladed propeller assembly. The cockpit sat under a glazed three-piece arrangement with the center piece sliding rearwards along rails for entry/exit. The wings were straight appendages, low-mounted along the fuselage underside featuring rounded wingtips. The undercarriage was of the typical "tail dragger" arrangement with single-wheeled main legs retracting under each wing root and a positional tail wheel under the empennage. The tail section was conventional with a short rounded vertical tail fin and a pair of horizontal tailplanes. The undercarriage would have been strengthened to content with the violent forces inherent in carrier operations. Proposed armament for the A7M series would have included 2 x 20mm Type 99 cannons along with 2 x Type 3 heavy machine guns (some sources states 4 x 20mm cannons, all in the wings). The A7M recorded a top speed of 390 miles per hour with a range of 770 miles and service ceiling of 35,700 feet.
Advertisements 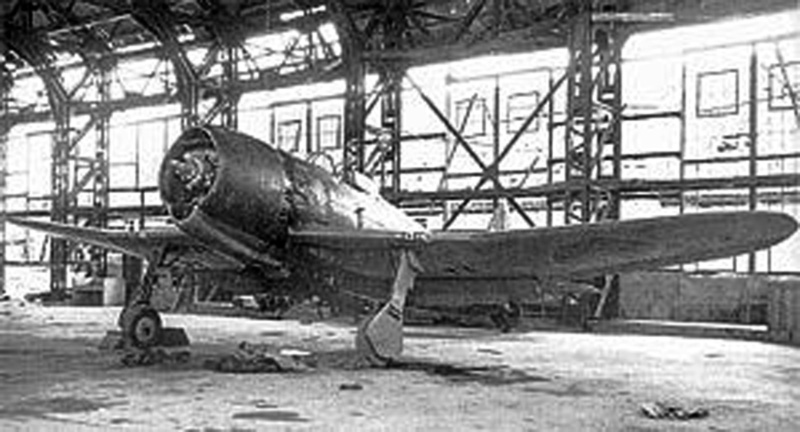