Authored By: Staff Writer | Last Edited: 01/27/2022 | Content ©www.MilitaryFactory.com | The following text is exclusive to this site. 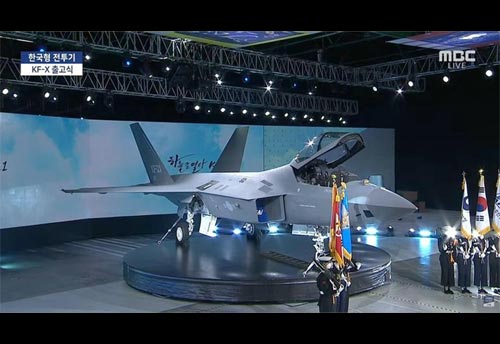 The "5th Generation Fighter" - along with the "Unmanned Aerial Vehicle" - is the current buzzword in the aviation defense industry. The 5th Generation fighter is a technological marvel, intended to surpass the capabilities of both modern 4th and 4.5th Generation mounts in wide circulation today through powerful tracking and engagement facilities, advanced avionics, high-end engine installations, agile performance, composite structures and inherent stealth features to help dominate the battlefield. The first operational 5th Generation Fighter design became the American Lockheed F-22 "Raptor" air superiority fighter which has been followed by developments emerging from Russia (Sukhoi Su-57 "Felon") and China (Chinese Chengdu J-20). India remains in a joint-development effort with the Russians fto produce a localized version of the Su-57, a Turkish endeavor has been announced, and a Japanese 5th Generation fighter design (born from the Mitsubishi ATD-X demonstrator) is advancing. As such, South Korea has followed suit and thrown its hat into the ring with its own local 5th Generation Fighter program - the "KF-21 Boromae" (formerly the "KF-X").

NOTE: Presented performance values on this page are estimates only. As the KF-X project aircraft remains in development, this article will be updated to reflect any announced changes.

The Korean War (1950-1953) cost the lives of tens of thousands of military and civilian personnel, becoming one of the major battlegrounds of the Cold War between the Soviet Union and the United States (ahead of the Vietnam War). Prior to the war, and after World War 2 and the fall of the Japanese Empire, the Korean Peninsula was divided between a communist northern sphere and a democratic southern sphere. With Stalin's blessing, the North moved in to invade the South and the UN responded in force over the three-year conflict that saw the advent of the jet fighter and jet-versus-jet duels that eventually incorporated Soviet-versus-American pilots. The war ended with a loose armistice and tensions have been high and low ever since.

With that said, the South Korean government has worked well over the decades to field a capable and modern fighting force to counter the size and strength of the North. Outnumbered in most respects, the South manages through the latest technology and modern tactics, hoping to employ its military might (aided largely by the United States) to content with any endeavor the North may pursue. There is much intrigue in the region for Japan, the Philippines, Indonesia, China, Taiwan, Thailand and Malaysia all have stakes in a stable Asia-Pacific region though all are now faced with a very public arms race.

The South Korean KF-X fighter program seeks to design, develop and produce a wholly indigenous 5th Generation Fighter of the multirole type to create an imbalance of the playing field against the North. The North fields a collection of Soviet/Russian aircraft with a portion of its fleet dating back to the Cold War years. An indigenous initiative would seemingly provide the South Koreans with complete autonomy in the future aerial defense of their country and allow the option to export the system to interested allied parties for self-economical gain. However, indigenous 5th Generation Fighter programs are costly beasts and consume much research and development effort as they do time to implement in full (as proven by the bloated Lockheed F-35 program which initially promised several financial and logistical benefits). Despite the inherent benefits of such a program, there are obvious drawbacks to threaten the future of the KF-X. To date, several configurations have been studied with no clear concrete direction established as the future of the program remains in doubt. The South Korean Air Force may very well be forced to settle on existing fighter mounts - most likely 4.5th Generation Types - for the near future. The front-running designs of the KF-X program - like other current 5th Generation Fighter designs appearing globally - imitate the design lines established by the Lockheed F-22 Raptor utilizing low-observable features and inherent stealth benefits.
Advertisements

South Korea has only been able to convince Indonesia to commit (20%) to the venture in which South Korea controls at least a 60% majority stake in the program, giving it the rights it covets for future export gain. Turkey was considering participation in the KF-X program but removed itself from contention when an equal share would not be granted - having since moved on to undertake a 5th Generation Fighter program all their own. Additionally, current South Korean technological capabilities require foreign assistance and overtures have been made to Lockheed, Saab, EADS and Boeing for help (the only true South Korean aircraft initiative remains the KAI T-50/FA-50 advanced trainer/light strike aircraft - the program being largely directed by Lockheed). The KF-X would be fielded alongside, or replace outright, the KF-16 - the South Korean version of the Lockheed F-16 "Fighting Falcon". The South Koreans intend the KF-X to fill the technological and performance void between their F-16 derivative and the more advanced F-35 Lightning II in the lightweight multirole fighter mold.

On August 2nd, 2011, a research facility related to the KF-X program opened its doors in Daejeon along the central-western portion of the country. "Concept definition" was ongoing as of this writing (2012) and KAI (Korea Aerospace Industries) became the prime contractor of the program. Samsung Techwin was selected to develop the required powerplant - though this would be based on an existing and proven foreign design to speed development. Electronics would be managed by the LIG Next concern.

Two designs, the "KF-X-101" and the "KF-X-102", are competing for the overall rights to the KF-X program. The KF-X-101 is a conventional single-engine arrangement while the KF-X-102 is a twin-engine, delta-winged configuration with forward canards. The KF-X-101 would be less expensive and less technological to develop and produce (though sport lesser capabilities as a result) while the KF-X-102 would provide the needed performance for interception and air superiority sorties required of the mount, making her more complicated and expensive to produce in the numbers required. It is expected that some 130 total aircraft would be manufactured in an initial production batch for South Korean and Indonesia, with Indonesia being granted 50 of these for their early financial involvement. Operational service year is optimistically eyed for 2020.

To date, however, there remains many hurdles in bringing the KF-X to light. There is serious doubt as to the feasibility of the South Koreans (even internally) to complete such a large-scale intensive program due to the high-level state-of-the-art technologies, production and cost involved with no perceived guarantees from the end-product. The dangers of failing the initiative, however, could set the South Korean aerial defense industry back several years in its goal in trying to outpace the North (as well as China, who is already developing two advanced fighters). It may work out that the South Korean Air Force - amidst upcoming elections and further budget meandering - settles on other foreign aircraft designs for purchase including additional F-16s, the F-35, the Saab Gripen, the Eurofighter Typhoon or the French Dassault Rafale - the latter of which was recently selected by the Indian Navy.

October 2014 - The KF-X program has officially received conditional defense ministry approval for development. The KF-X-200 twin-engined design has been selected over the single-engined KF-X-100 proposal.

January 2016 - Full-scale development of the KF-X fighter has been announced. Indonesia remains an active partner and the first batch of 40 aircraft is expected for 2026. As many as 120 may be available into the early 2030s.

May 2016 - The General Electric F414-400 turbofan engine has been selected ahead of the EuroJet EJ200 offering for the KF-X fighter program (the same engine powers the Boeing F/A-18 E/F "Super Hornet" and Saab "Gripen E" fighter lines). A first-flight is tentatively scheduled for sometime in 2020. The engines will be built locally (under license) under the Hanwha Techwin brand label. This selection of engine may impact export value of the KF-X system.

October 2017 - The revised KF-X design reflects a dimensionally larger and heavier aircraft. Engineers have also confirmed a two-seat variant is in the works. Weapons support includes the European MBDA Meteor missile series. As it stands, the KF-X program will see a first-flight in 2022 with development continuing into the mid-2020s. Deliveries are set for sometime in 2026.

July 2018 - The Defense Ministry has approved of an early design form by Korea Aerospace Industries of the KF-X fighter as well as a new planned Active Phased Array Radar (APAR). The formal design phase is now set to begin with the Critical Design Review (CDR) scheduled for September of 2019. The prototype is expected to fly for the first time in June of 2022.

October 2018 - KF-X partner Indonesia is looking to rework its commitment to the program amidst economic woes. The nation was originally slated to pick up $1.9 billion USD of the estimated $7.5 billion USD development price tag.

January 2019 - It was announced that the Indonesian government has made a $117 million USD payment to KAI in support of its portion of the K-FX fighter program. Indonesia had not made a payment into the program since 2017 and is committed to covering up to $1.9 billion USD of project costs. 80 of the new fighters are slated for Indonesia, with South Korea buying 120 units.

October 2019 - Recent information reveals that a full-sized mock-up will be made available for public display in November 2019 with a prototype roll-out scheduled for the early part of 2021. Furthermore, a first-flight scheduled for 2022 after which full development of the fighter will be formally completed sometime in 2026.

October 2019 - Reports indicate that KAI has begun construction of the first KF-X prototype.

December 2019 - MDBA of France has been contracted by Korean Aerospace to integrate its 'Meteor' Air-to-Air Missile (AAM) system to the K-FX design.

June 2020 - GE Aviation has delivered the first examples of its F414 (F414-400K) turbofan engines to the KF-X program. Flight testing is on pace to begin in 2023. Six prototypes are expected to be built.

July 2020 - KAI has revealed images of the first KF-X airframe under assembly.

August 2020 - An indigenously designed and developed AESA (Active, Electronically-Scanned Array) radar was revealed for the K-FX fighter program with Hanwha Systems (supplying the hardware) as the lead to be supported by LIG Nex1 (providing the software).

April 2021 - The KF-X prototype was unveiled via broadcast ceremony on April 9th, 2021, given the official designation of KF-21 "Boromae". A first-flight is expected in 2022. 170 of the type are expected to be produced with some 50 to be delivered to program partner Indonesia.

January 2022 - The first-flight of the KF-21 prototype is scheduled for June 6th, 2022 as a two-seat model is currently under assembly as well.

General Assessment
Firepower
Performance
Survivability
Versatility
Impact
Values are derrived from a variety of categories related to the design, overall function, and historical influence of this aircraft in aviation history.
Overall Rating
The overall rating takes into account over 60 individual factors related to this aircraft entry.
82
Rating is out of a possible 100 points.
Relative Maximum Speed
Hi: 1600mph
Lo: 800mph
This entry's maximum listed speed (1,553mph). 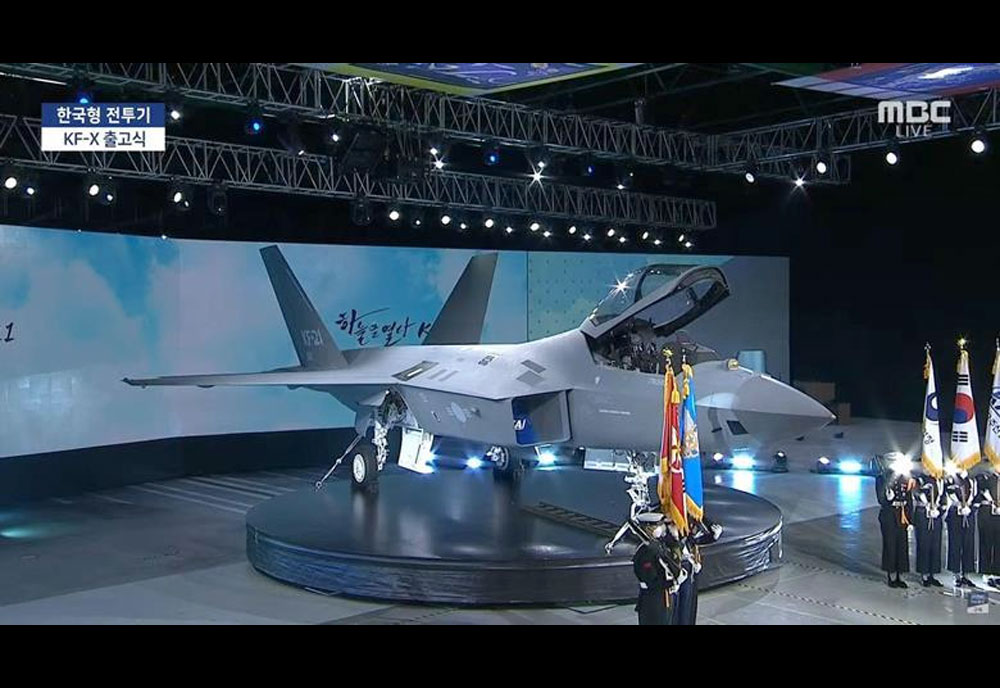 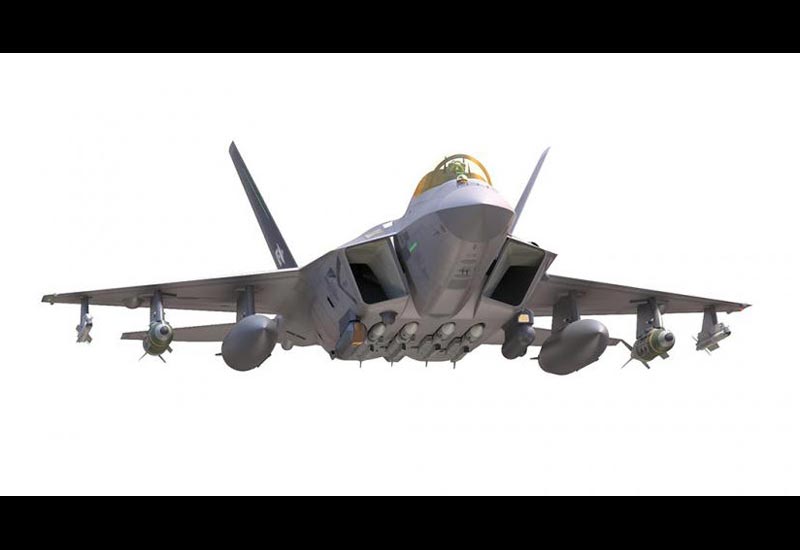 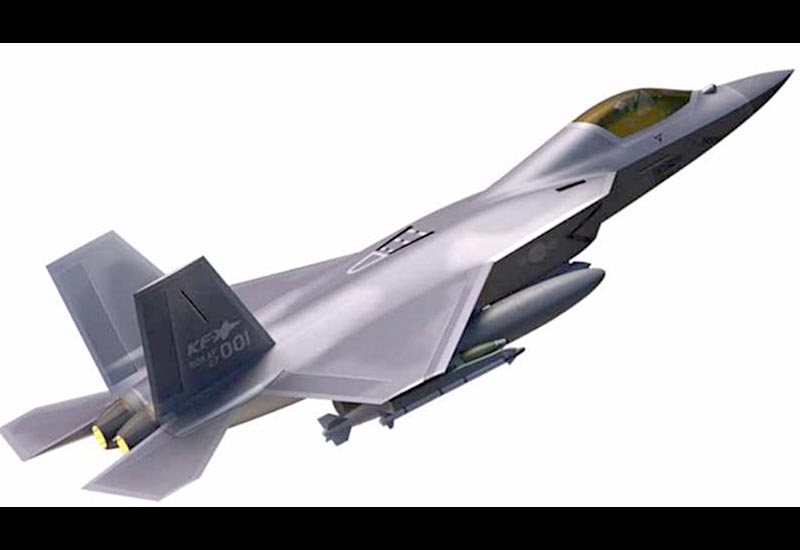 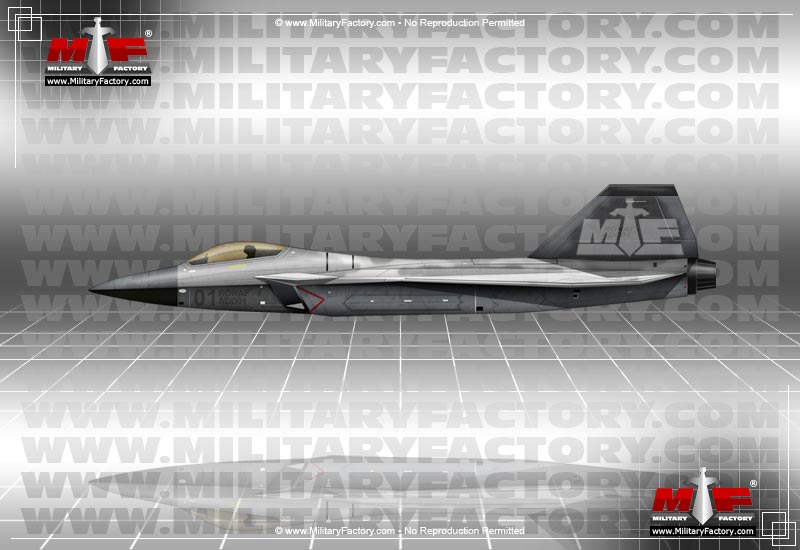