The Chengdu Wing Loong UAV drone serves double-duty for several global customers beyond China as it can be modified to undertake various over-battlefield roles including attack.

Authored By: Staff Writer | Last Edited: 11/08/2022 | Content ©www.MilitaryFactory.com | The following text is exclusive to this site. 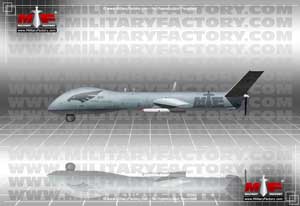 The Chengdu Pterodactyl I (also known as the Wing-Loong I) was unveiled by company representatives during the China International Aviation and Aerospace Exhibition (Zhuhai) in 2010. The system is a "Medium-Altitude, Long-Endurance" (MALE) Unmanned Aerial Vehicle (UAV) with provision having been developed to convert the type into an Unmanned Combat Air Vehicle (UCAV) by supporting various precision munition options. A first-flight is believed to have occurred during 2009 and flight testing into 2013. At least one prototype was lost during development.

Chengdu Aircraft Industry Group (CAC) holds a decades-long history concerning modern Chinese aviation, having begun operations as a manufacturer of Soviet-originated jet aircraft during the Cold War during a time when a close relationship between the two Asian powers ruled. Since then, the concern has evolved to designing, developing and producing largely indigenous products for use by the Chinese military and allies (the latter only when export is approved). The Pterodactyl UAV is one such creation, approved for export and, to date, having been evaluated (though not selected) by Pakistan for its MALE UAV requirement.

Externally, the Pterodactyl showcases an appearance not unlike the American "Predator" UAV series, complete with its bulbous nose housing, streamlined fuselage, wheeled undercarriage and outward cranked vertical tail fins. The main wing assemblies are also straight appendages and can hold underwing stores (it is envisioned that the system will make use of up to four underwing guided bombs or missiles). A blister, held under the nose, contains traversing optics. The undercarriage is wheeled for easier management of the system by ground personnel and is fully-retractable into the body of the vehicle when in flight - all of the legs retract rearwards to promote strong aerodynamic qualities. Power is served through a rear-mounted conventional engine driving a three-bladed propeller assembly in a "pusher" configuration.

Internally, the Pterodactyl is being testing with various equipment packages. The aircraft is suspected to carry a synthetic aperture radar system as well as FLIR (Forward-Looking Infra-Red). The total listed payload of the Pterodactyl series is expected to be in the vicinity of 220lbs on production-quality models. Listed specifications include a 175 mile per hour maximum speed, 2,500 mile operational range (with 20 hour mission endurance time reported) and an operating service ceiling of 16,400 feet.

The Wing-Loong II is a modified, upgraded model with greater support for munitions-carrying - up to twelve-air-to-surface missiles are promoted at underwing hadpoints. It sports a 9,300lb weight and 36-foot wingspan.©MilitaryFactory.com
Note: The above text is EXCLUSIVE to the site www.MilitaryFactory.com. It is the product of many hours of research and work made possible with the help of contributors, veterans, insiders, and topic specialists. If you happen upon this text anywhere else on the internet or in print, please let us know at MilitaryFactory AT gmail DOT com so that we may take appropriate action against the offender / offending site and continue to protect this original work.

October 2018 - Pakistan has committed to the purchase of a fleet of Wing Loong II series attack UAVs from China.

November 2018 - The Wing-Loong II was displayed for the first time at the Zhuhai static park complete with PLAAF colors and the designation of "GJ-2".

September 2019 - Serbia has been confirmed as a customer of the Wing-Loong uAV.

February 2020 - The Wing Loong 2 has been operationally used over Libya by the Libyan National Army.

November 2020 - Nigeria is set to receive a pair of Wing-Loong II armed UAVs from China.

(Showcased performance specifications pertain to the Chengdu Wing-Loong I production variant. Performance specifications showcased above are subject to environmental factors as well as aircraft configuration. Estimates are made when Real Data not available. Compare this aircraft entry against any other in our database or View aircraft by powerplant type)
Typically sensor equipment for ISR role but also up to 220lb of externally-held air-to-surface missiles or precision-guided drop munitions held across six total underwing hardpoints (three to a wing).

General Assessment
Firepower
Performance
Survivability
Versatility
Impact
Values are derrived from a variety of categories related to the design, overall function, and historical influence of this aircraft in aviation history.
Overall Rating
The overall rating takes into account over 60 individual factors related to this aircraft entry.
64
Rating is out of a possible 100 points.
Relative Maximum Speed
Hi: 200mph
Lo: 100mph
This entry's maximum listed speed (174mph). 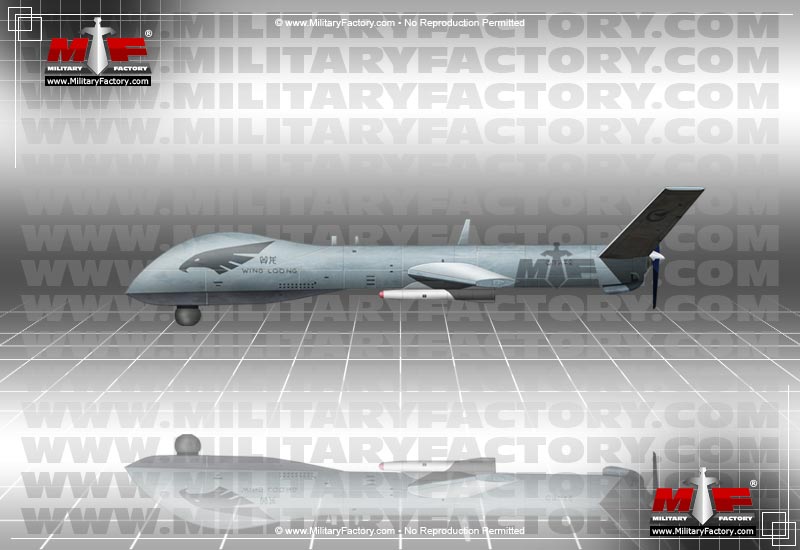 Aviation developments of similar form and function, or related to, the Chengdu (AVIC) Wing-Loong (Pterodactyl)...