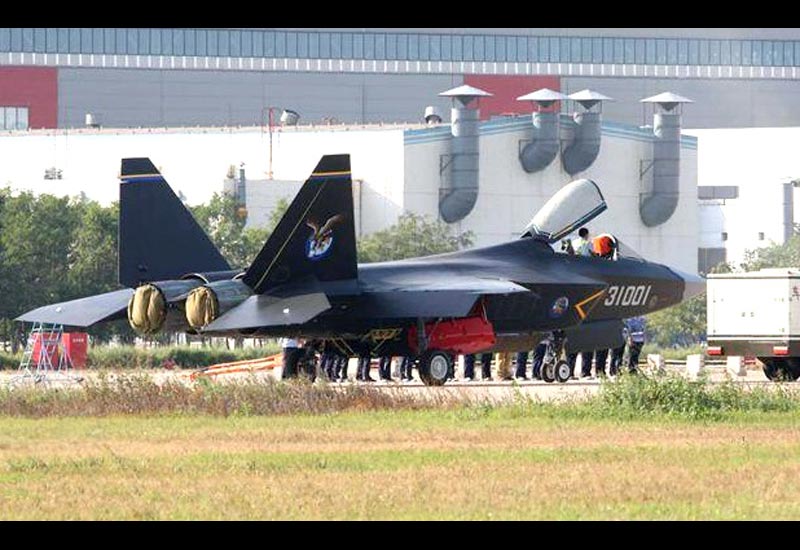 Progress continues on the Chinese Shenyang J-31 stealth fighter - with a carrierborne model flown as recently as November 2021.

China has long since held a desire to showcase itself as a growing power to the world. Besides achieving a strong global economy, the government has spared no expense in attempting to field a technologically-savvy, numerically superior force built largely upon the works of others (Soviet-Russian/American). To that end, Chinese infrastructure has increasingly allowed local production of various components (including heavy industrial engines, combat vehicles and munitions) that have been modified to Chinese requirements over the years. Recent developments have included a main battle tank, aircraft carrier and - now - 5th Generation stealth-based fighters.

The Chinese concern of Shenyang is currently developing the" J-31" air superiority fighter in the 5th Generation mold to compete with the American Lockheed F-22 Raptor / F-35 Lightning II and Russian T-50 (PAK FA). Development of the aircraft was aided through the deliberate theft of American DoD files critical to the F-35 project and it can only be assumed that such design data has accelerated the Chinese program to an unlimited extent. Judging by the outward appearance of the J-31 prototype alone, it certainly looks a cousin to the American F-35 series currently undergoing weapons testing as of this writing (2016). China is also at work on a larger 5th Generation fighter mount known as the Chengdu "J-20" which took its first flight in January of 2011. Observers have noted the general dimensions of the J-31 is more akin to that of the smaller Lockheed F-35 Lightning II as opposed to the full-sized F-22 Raptor series. As such, performance and role are assumed similar. The J-31 is also believed to be along the lines of a carrier-based fighter that may be utilized (or at the very least trialled) on the upcoming Chinese Navy aircraft carrier. As is customary, Chinese authorities have not authenticated existence of the J-31 officially despite seemingly staged photographs "leaked" to the internet throughout 2012.

Design lines of the J-31 follow those as premiered on the F-22 with a mix of F-35 features thrown in. The fuselage, while generally tubular, sports a faceted approach with clean lines, presumable for radar reflection purposes. The single-seat cockpit is held well-forward in the design though aft of a nose cone housing the active search radar array. The single piece canopy, hinged at the rear, presents the same "dogtooth" angles found in 5th Generation aircraft of American origin. Intakes are trapezoidal as in the F-22 and aspirate a pair of Russian-inspired turbofan engines buried deep within the fuselage. The engines exhaust through conventional rings at the rear. The main wings are slightly swept along their leading edge with the usual control surfaces identified. There are a pair of all-moving tailplanes as well which should provide for improved agility. The vertical tail fins, mounted outboard of each engine nacelle, are outward-canted as in the F-22. The undercarriage consisted of two main landing gear legs (single-wheeled) and a two-wheeled nose leg (presumably reinforced for carrier operation). Many observers have begun to described the J-31 generically as a "twin-engine F-35C".

Armament options are expected to run the normal gamut of available stores in the Chinese inventory. This would include the bevy of air-to-air missiles and possible precision-guided munitions. An internal cannon is assumed. There is a large-volume internal weapons bay noted which will provide a stealth measure consistent with the F-22/F-35 family.

While a powerplant has not been officially disclosed, the Russian Klimov RD-33 and RD-93 series turbofan engines have been mentioned - the RD-93 has already been procured for the JF-17 fighter development. In either case, the powerplant will assuredly be produced locally to Chinese Air Force specifications within time if history is any guide.

November 2014 - the FC-31 was debuted in the skies over AirShow China. The aircraft is now categorized in Western publications as a "4th Generation Fighter" though some still consider it to be of 5th Generation design.

November 2015 - It was announced that AVIC expects a production-quality version of the FC-31 to fly sometime in 2019.

November 2018 - The Chinese Navy has expressed interest in acquiring the J-31 in numbers to succeed the limited J-15 models currently in service.

May 2020 - The J-31 / FC-31 fighter has been recently seen conducting various test flights in undated local Chinese media reports, ensuring that the program is still alive and well despite speculation that the program has slowed or been stopped altogether. The aircraft appeared in a new silver / gray paint scheme.

November 2021 - A navalized version of the FC-31 was reported by Chinese social media as having its first flight.

Values are derrived from a variety of categories related to the design, overall function, and historical influence of this aircraft in aviation history.
Overall Rating
The overall rating takes into account over 60 individual factors related to this aircraft entry.
70
Rating is out of a possible 100 points.
Relative Maximum Speed
Hi: 1400mph
Lo: 700mph
This entry's maximum listed speed (1,367mph).