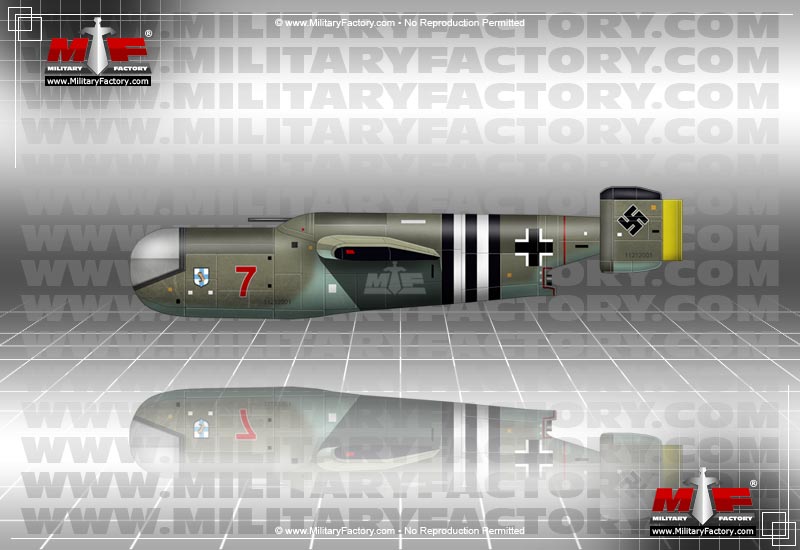 The diminuitive Arado Ar E.381 was a Parasite Fighter prototype intended to be released into combat by an accompanying mothership.

Authored By: Staff Writer | Last Edited: 02/10/2020 | Content ©www.MilitaryFactory.com; the following text is exclusive to this site.
The Ar E.381 rocket-fighter proposal was submitted in 1944 for review by the German Air Ministry. Whilst a plethora of companies (including Arado, Heinkel, and Henschel) were competing to fulfill the role of what was to be dubbed the "Parasite Fighter" - inexpensive, small, and fast rocket-powered interceptors - the Arado Ar E.381 showed promise. By this point in World War 2 (1939-1945), the Allied bombing campaign was taking its toll on German war-making infrastructure and a solution was in dire need.

The Ar E.381 went through three major engineering revisions spanning a I, II and finally a III variant. Through its evolution, the fuselage design was enlarged and streamlined to a more acceptable form. In the end, the Ar E.381 III would become the closest version to mimic possible production models with the ability to be carried underneath an Arado Ar 234C-3 "Blitz" jet bomber. The parasite fighter itself would have been armed through 6 x RZ65 or 73 type spin-stabilized rockets and 1 x 30mm MK 108 cannon. Power to the airframe was to come from a Walter HWK 109-509B series rocket motor of limited endurance.

Perhaps the most interesting design element of the Ar E.381 III was the fact that the pilot was confined, in the prone position, at the nose of the vehicle which allowed the aircraft to be of a slim, aerodynamic profile and not require the use of a traditional cockpit. In the parasite fighter concept for the Germans, the Ar E.381 III would be attached to the underside of the Ar 234 bomber until taken to the desired altitude (about 3,281 feet or 1,000 meters) upon which the fighter would be released. From there, the Ar E.381 III would go into a dive and achieve a speed of up to 510 mph. It was during a second attack run that the rocket booster would be ignited. Once fuel was spent, the fighter would have to glide home and land under without power - the undercarriage consisting of a single skid running along the bottom of the fuselage (a braking parachute was also deployed to retard landing runs).

In theory, the Ar E.381III could conceivably make no more than two passes at a bomber formation before running out of fuel at which point the aircraft remained highly vulnerable to an enemy response.

The Ar E.381 was built to be simplistic, therefore all amenities such as heating were provided by the carrier craft until departure from the mothership. This sort of engineering kept the Ar E.381 light in operating weight and simple to produce in mass quantity. The aircraft was also designed to be taken apart into several major components consisting of the wing assembly, the fuselage and the tail section for ease of storage, transport and assembly.

In all, only a few mockups and airframes were constructed for further testing, with a reported unmanned air-towed version undergoing further trials, but ultimately the Ar E.381 remained an unfinished concept at best. In the end, the German Air Ministry decided against pursuing the idea of a parasite aircraft. About four wooden frames were all that was realized by the Arado program.

The E.381 as a parasite fighter held doubtful effectiveness - many attempts even with jet-powered types were made in the post-war years that also failed to deliver a quality concept. In theory the process held merit but, in practicality, the arrangement proved a complex offering that provided little more than traditional fighters already gave.

Values are derrived from a variety of categories related to the design, overall function, and historical influence of this aircraft in aviation history.
Overall Rating
The overall rating takes into account over 60 individual factors related to this aircraft entry. The rating is out of a possible 100 points.
44
Relative Maximum Speed
Hi: 750mph
Lo: 375mph
This entry's maximum listed speed (556mph).