The successful CASA CN-235 transport - formed from a Spanish and Indonesian partnership - has become the basis for the longer EADS CASA C-295.

Authored By: Staff Writer | Last Edited: 07/31/2020 | Content ©www.MilitaryFactory.com | The following text is exclusive to this site. 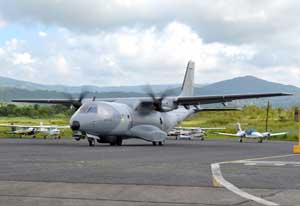 Attempting to cut a niche in the medium-lift, fixed-wing tactical transport market has been the CASA/IPTN CN-235 series introduced in 1988. Some 273 have been produced to date (2015) and these have gone on to see widespread service with elements ranging from Bangladesh and Botswana to Venezuela and Yemen. The series has seen its end for some as a military instrument while others continue purchases of the type. The CASA C-295 is a related development introduced in 2001 while offering increased capabilities through a stretched-fuselage design, Pratt & Whitney PW127G turboprop engines and greater cargo-hauling capability. It is detailed in a separate entry on this site.

The CN-295 began as a joint-project venture between CASA (Contrucciones Aeronauticas SA) of Spain and IPTN (Indonesian Aerospace) of Indonesia attempting to design, development and (individually) manufacture a viable tactical transport platform at cost to compete with the likes of stalwarts such as the Lockheed C-130 "Hercules". The aircraft was given the usual "tactical transport features" as a result: high / straight wing mainplanes, a short undercarriage for low-profile ground-running, underslung engines to clear ground activity, and a raised tail unit offering excellent access to the cargo hold within the body of the aircraft. The crew numbers two pilots and a flight engineer while the hold supports up to 51 seated passengers, 35 airborne troopers, 18 medical litters or four supply palettes. The payload maximum equals about 13,100 lb.

Selected power is from 2 x General Electric CT7-9C3 turboprop engines driving four-bladed propeller assemblies through 1,750 horsepower output each. Cruising speed is 285 miles-per-hour with ranges out to 2,705 miles and a service ceiling up to 25,000 feet. Rate-of-climb is 1,780 feet-per-minute.

The resulting prototype first flew on November 11th, 1983 and service introduction came on March 1st, 1988. Initial production models were thirty of the CN-235-10 model to which fifteen were produced by the two manufactures and carried General Electric GT7-7A engines. CASA then added 100 of the CN-235-100 mark outfitted with General Electric CT7-9C engines housed in composite nacelles. Additionally improvements were made to various onboard components and systems. Indonesian aero-industry added 110 of this mark.©MilitaryFactory.com
Advertisements

CN-235-200/220 was seen as an improved CN-235 with structural refinements throughout as well as better field performance and operational range. CASA completed 200 of this standard and IPTN added 220 of its own production. CN-235-300 introduced a Honeywell-based avionics fit and some minor changes. The CN-235-330 "Phoenix" was based on the -200 / -220 series aircraft and intended to compete for the Australian Project Air 5190 tactical airlifter but fell to naught. The CN-235 MPA became a dedicated maritime patrol design with provision for carrying and launching Anti-Ship Missiles (ASMs) and air-launched torpedoes. HC-144 "Ocean Sentry" became another dedicated maritime development, introduced for service in 2009, and adopted by the United States Coast Guard (USCG) - eighteen of this type were procured.

For those global parties interest in an attack model with excellent handling and loitering capabilities, the AC-235 was developed. This gunship-minded form is armed through a 30mm cannon (facing to the side, the aircraft banking to engage), rocket pods and missiles as well as carrying full radar functionality for low-light / nighttime work. The design is intended to challenge the likes of the Lockheed AC-130 Hercules series gunships and similar platform.

A few airline concerns managed small stocks of CN-235s as passenger-haulers but these did not find much notable success in the role.

The CN-295 is still marketed under the brand label of Airbus Defence & Space as a "lower cost tactical airlifter" (EADS merged with CASA to produce "EADS CASA" which was absorbed into the Airbus Military brand in 2009). It has proven a versatile performer, offering Short-Take-Off and Landing (STOL) capabilities on prepared or rough airfields and is known as a reliable product. Airbus DS also headlines the troubled A400M "Atlas" heavy-lifter development (detailed elsewhere on this site) as well as the C-212 light transport.©MilitaryFactory.com
Note: The above text is EXCLUSIVE to the site www.MilitaryFactory.com. It is the product of many hours of research and work made possible with the help of contributors, veterans, insiders, and topic specialists. If you happen upon this text anywhere else on the internet or in print, please let us know at MilitaryFactory AT gmail DOT com so that we may take appropriate action against the offender / offending site and continue to protect this original work.
Advertisements

(Showcased performance specifications pertain to the CASA / IPTN CN-235-100 production variant. Performance specifications showcased above are subject to environmental factors as well as aircraft configuration. Estimates are made when Real Data not available. Compare this aircraft entry against any other in our database or View aircraft by powerplant type)
None - Unless outfitted for maritime patrol duties (anti-ship missiles/torpedoes) or gunship sorties (30mm cannon, rockets and Air-to-Surface Missiles (ASMs)). 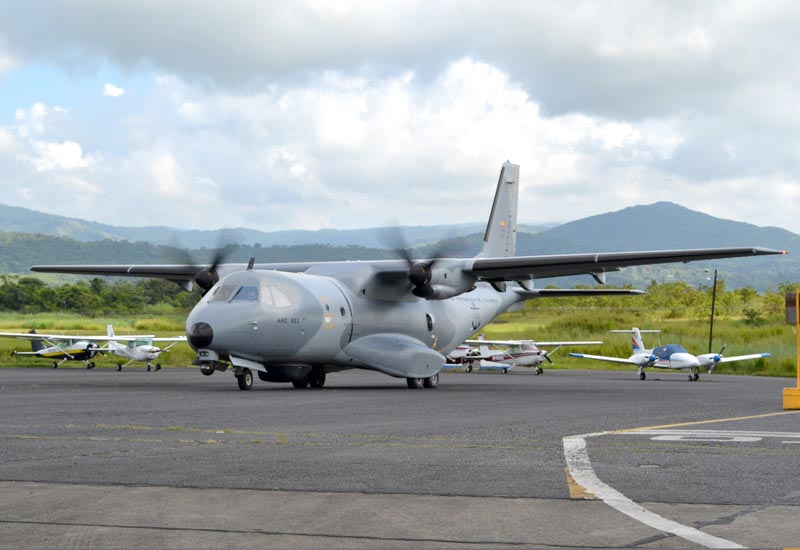 Image from the United States Department of Defense imagery database.
2 / 7 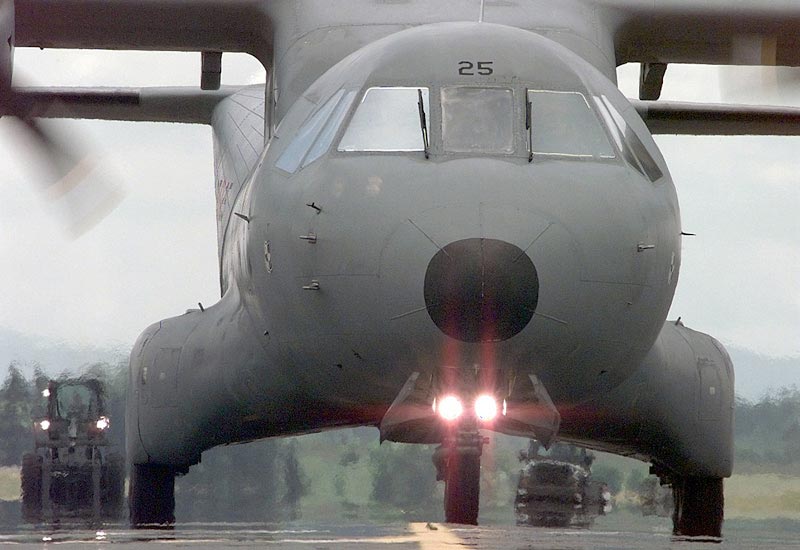 Image from the United States Department of Defense imagery database.
3 / 7 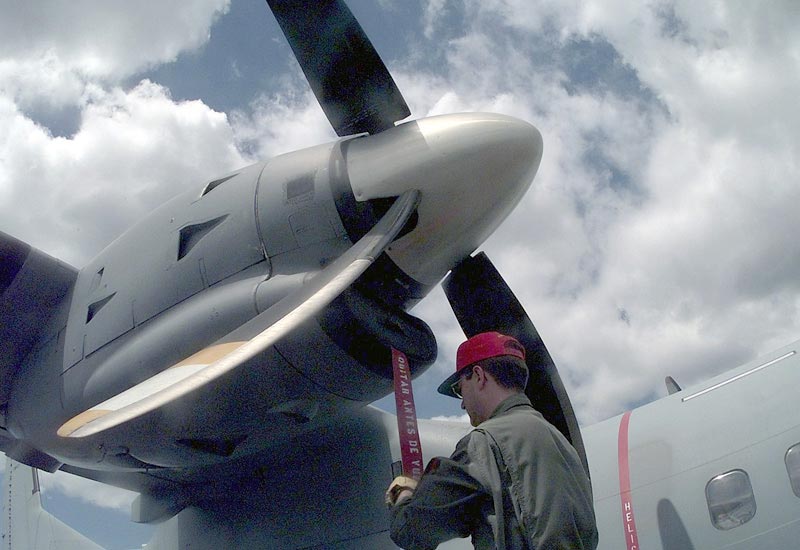 Image from the United States Department of Defense imagery database.
4 / 7 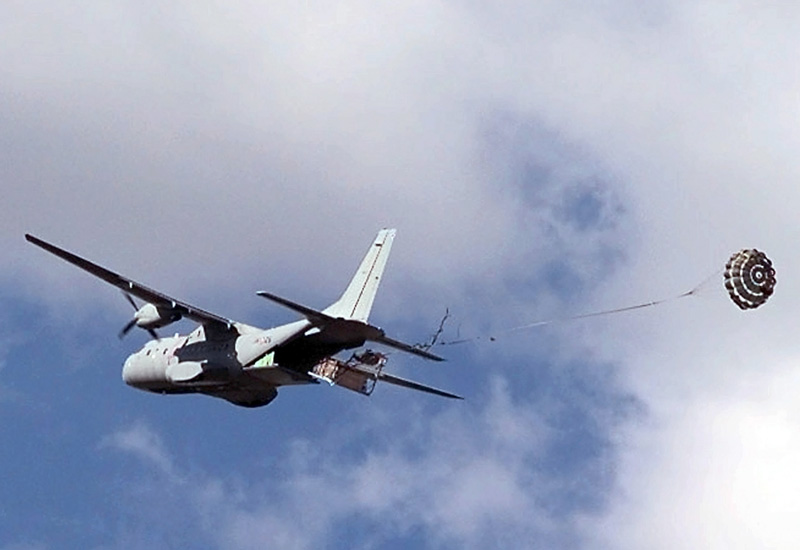 Image from the United States Department of Defense imagery database.
5 / 7 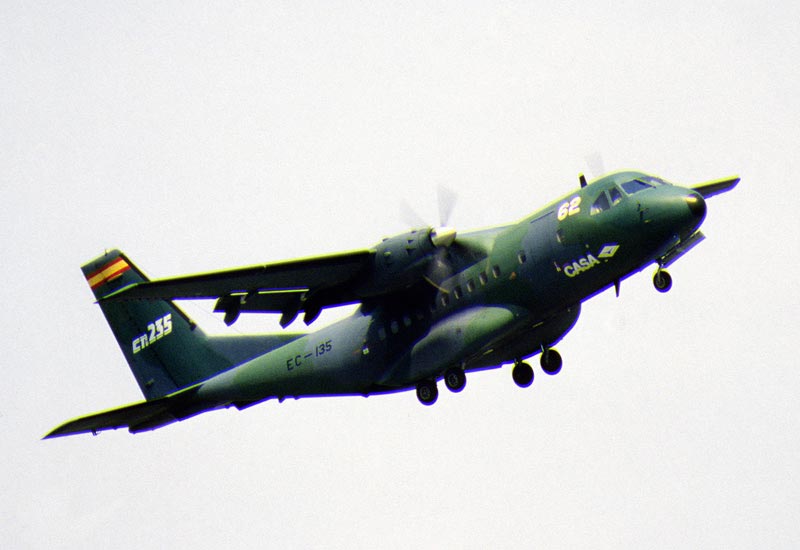 Image from the United States Department of Defense imagery database.
6 / 7 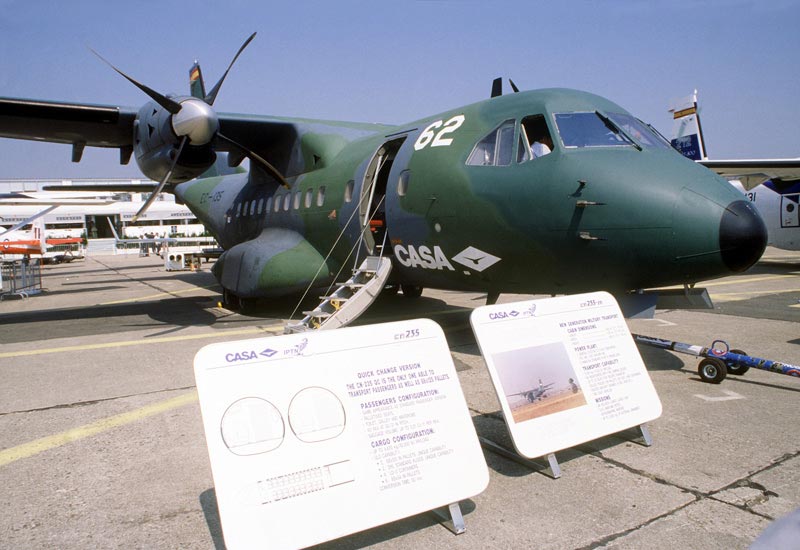 Image from the United States Department of Defense imagery database.
7 / 7 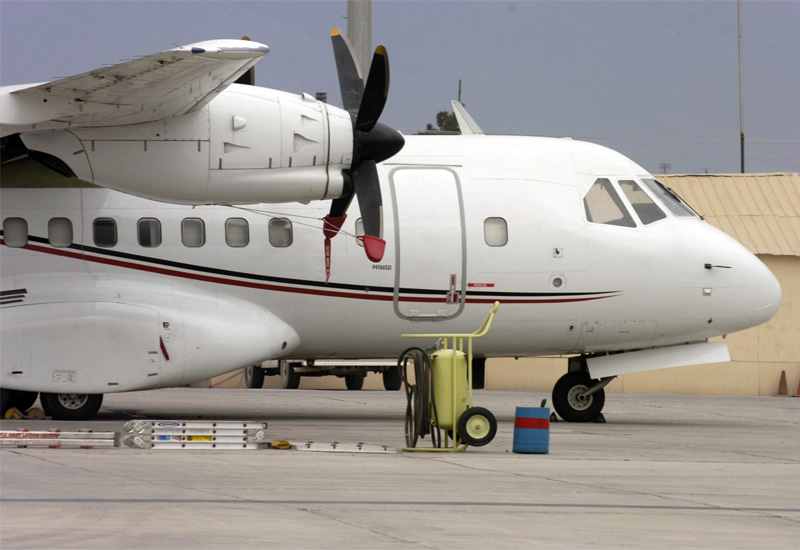 Aviation developments of similar form and function, or related to, the Airbus Military (CASA) CN-235...