The remote-piloted Boeing X-36 technology demonstrator was developed to further research in a tailless fighter design. 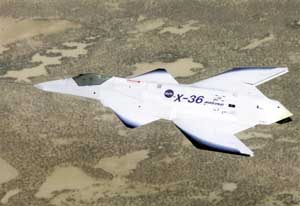 The Boeing X-36 (formerly McDonnell Douglas) was a unmanned technology demonstrator and served NASA (Ames and Dryden Research Centers) through some 31 total flights. The program sought to evaluate a tailless fighter design for possible military application and featured a unique wing planform to accomplish the requirement. By all published accounts, the program was a complete success, furthering research into future tailless aircraft design as well as improved maneuverability, pilotless design and airframe survivability. With design work beginning as early as 1989, a pair of flyable aircraft were eventually built for the program beginning in 1994 using "rapid prototyping" techniques.

On the whole, the aircraft featured some conventional qualities such as its forward-set cockpit and internal turbofan engine but was an inherently unstable design. Its wing arrangement was largely unconventional and included forward canards near amidships with the main wing assemblies at the rear of the airframe. Control was through a variety of facilities including Fly-By-Wire (FBW), specialized correcting software, canards positioning and thrust-vectoring at the engine exhaust port. As a tailless aircraft, it lacked any vertical tail surfaces. The single engine installation was aspirated by a pair of intakes at the front of the layout, one fitted to either side of the fuselage near the cockpit. As a remotely-piloted design, the X-36 also lacked a "true" cockpit as the operator piloted the aircraft from a Ground Control Station (GCS). Since the cockpit did not require space and facilities to support a human pilot, the entire aircraft was designed at 28 percent scale to control costs, speed up development and provide better access to key internal components. The X-36 was, therefore, only representative of a possible future fighter design.

The airframe was given a running length of 18 feet, 2 inches with a wingspan of 10 feet, 4 inches and height of 3 feet, 1 inch. A Maximum Take-Off Weight (MTOW) of 1,250lbs was listed. Power was served through 1 x Williams International F112 series turbofan engine developing 700 lbs of thrust and this provided a maximum speed of 235 miles per hour with a service ceiling nearing 20,500 feet.

The initial test vehicle went airborne for the first time on May 17th, 1997 on what would begin a 25-week long evaluation period. Once their useful data-collecting days had ended, the two aircraft were delivered to museums - one to reside at the National Museum of the United States Air Force (Wright-Patterson AFB) in Dayton, Ohio and the other for display at the Air Force Test Flight Center at Edwards AFB, California.

The X-36 was constructed by Boeing Phantom Works of The Boeing Company of its St. Louis, Missouri facility. The product and program was a partnership held between Boeing and NASA through a 50/50 cost-sharing split.
Advertisements

(Showcased performance specifications pertain to the Boeing X-36 production variant. Compare this aircraft entry against any other in our database or View aircraft by powerplant type)
None. 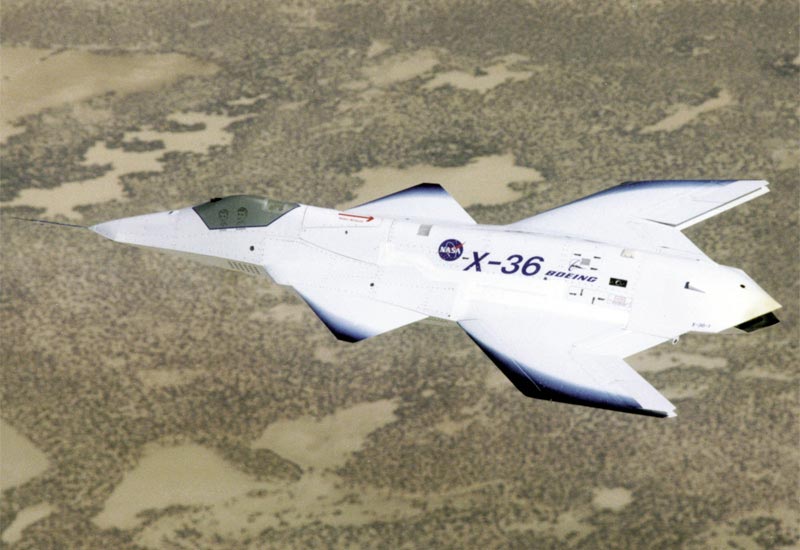