At its core, the aircraft, as we know it, has not changed much since the rise of flight began with the Wright Bros historical attempt. 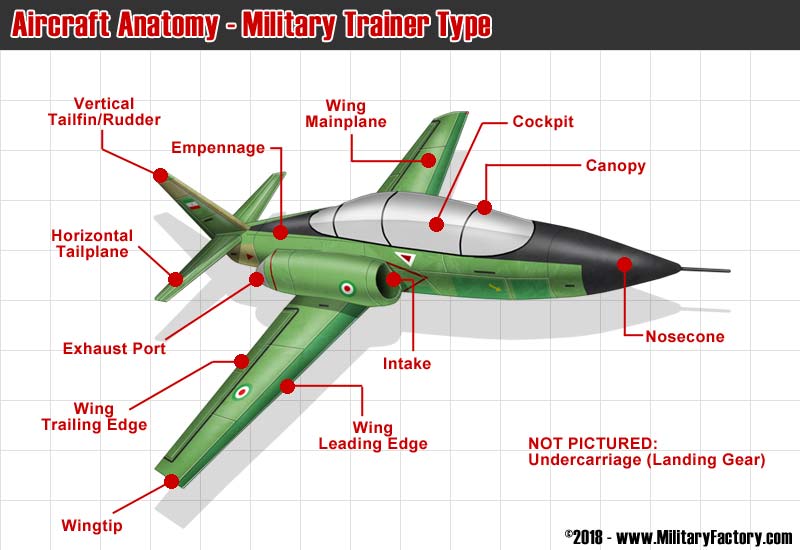 Nosecone - This structure is typically aerodynamic to promote streamlining as the aircraft cuts through the air. Most modern combat-related aircraft house a powerful radar system in the nose section. Older combat aircraft had a cut-off nose which acted as the intake for the engine within the fuselage. This is less common in modern warplanes.

Canopy - The canopy shields the pilot and cockpit from the outside environment. Technology has allowed for the implementation of various advancements to be added such as anti-icing and stealth coatings.

Cockpit - The manned nerve center of the aircraft where the pilot sits. This section contains all applicable controls of the aircraft related to flying, weapons and other systems. The avionics fit it tied into the cockpit as is a life support (oxygen) system.

Wing Mainplane - These are the primary surface area structures on any aircraft, holding a variety of smaller control surfaces needed for optimal control of the aircraft. Some aircraft hold fuel stores in the wings ('wet wing) and have hardpoints for carrying munitions (weapons).

Wing Leading Edge - This is the forend, or leading end, of the wing mainplanes and sometimes contain the flap surfaces.

Wing Trailing Edge - This is the aft-end, or trailing end, of the wing mainplane. This span usually contains the ailerons used for flight control and may contain flap surfaces as well.

Wingtip - As their name suggests, these areas are the absolute ends of the wing mainplanes.

Intake - This frontal open end of the engine compartment is used to aspirate, or take in, air from the front of the aircraft.

Exhaust Port - This section of the engine compartment is used to jettison exhaust gasses and thrust produced by the core engine system.

Empennage - The collective name given to the tail section of any aircraft. Tail units vary in design but follow nearly the same doctrine. A true 'flying wing' aircraft does not use a traditional tail unit as it is more of a blended fuselage-wing design arrangement.

Vertical Tailfin/Rudder - This surface forms part of the tail unit and is used by the airframe as a rudder.

Horizontal Tailplane - These surfaces (not always required in an aircraft design) accompany the vertical tailfin and is used in controlling and stabilizing the aircraft. Horizontal surfaces are sometimes fitted high on the vertical tail fin or low on the fuselage sides. Some are also cranked upwards or downwards depending on design.

Undercarriage - The undercarriage, or landing gear, are a collection of wheeled legs (usually retractable into the airframe) and used for ground actions such as taxiing, taking off and landing. Navy aircraft also typically include an 'arrestor' hook for catching cables placed horizontally along the deck of an aircraft carrier.